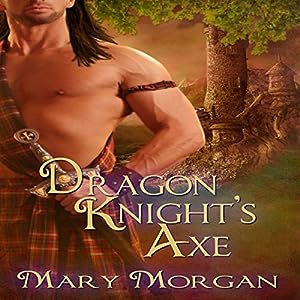 Alastair MacKay, a battled-scarred Dragon Knight, flees to the sea to separate himself from his fae-given power connecting him to the land. But it is on land that he rescues a woman from a slave trader in Ireland. It is through Fiona that he steps back inadvertently into a world filled with magic – taking on the role of protector and at the same time leading him on a journey to confront his greatest regret and fears.

Research assistant Fiona O’Quinlan loves translating ancient artifacts at Trinity College. When she falls asleep on an archeological dig, she awakens in another time. She soon discovers a Dragon Knight’s relic has been entrusted into her care. Determined to return the artifact to the Great Glen, Fiona is unprepared for the danger ahead – losing her heart and soul to Alastair “Beast” MacKay.

Will their love be strong enough to soothe the beast and heal the man? Or will Death swing its axe, leaving them lost for all eternity?

My Thoughts:  I read the book two years ago.  The audiobook narration immediately brought the story back to me, enforcing why I love the book. It also gave me a chance to re-meet one of the Fenian Warriors, preparing myself for Morgan’s new series, releasing June 30.  I am so stoked about this new series which feeds off this series.

Narrator Paul Woodson does an extraordinary job portraying the many emotions with his dynamic depiction of the characters, makes his, the perfect voice for the story.  I’ve heard him narrate several books in different genre.  He is quite versatile.

True to every story I’ve read from Mary Morgan, I’m pulled into a fantastic story within the first paragraph, this one, in the year of our Lord, 1206 A.D..  I am fighting a vicious sea, waves beat the deck’s surface, I spew water from my mouth, slashing rain stings my skin and wind so strong I am brought to my knees with exhaustion.  Was I headed overboard?  Whoa!  What an opening.

This series has time travel.  Why do I love this scenario?  It’s because traveling to the past is NOT something each heroine in the series wants.  Each have their own story on how they arrive in the highlands. Each are strong woman. Unfortunately, they are pawns in the hands of the Fae, acting out what has been foretold.

In my fantasy of fantasies, I’d really love to be one of these women who get pulled back. But since it is HIGHLY unlikely, I must satisfy myself traveling through the imagination and inspiration of a clever author, enhanced with an enthralling narration.  Mary Morgan has captured my fantasies with Fae, a dragon living in Loch Ness who can speak through mind touch, brawny, brave, honorable men and a wild land of magic.

Alastair is one of the Clan MacKay brothers, also known as Dragon Knights, who were the protectors and guardians of the last remaining dragon.  They also held Holy Relics to protect. These brothers were special because they were half-fae, half-human with mystical powers.  Alastair’s was the most powerful, for he had control of the land and responsible for the holy relic axe.

When blood of their sister, Meggie, was spilled on holy ground, the Fae removed the relics from them and their names were stricken from the Order.  In essence, they were banished. But because the Fae stilled loved them they gave them a path to redemption.  A quest. Two of the three brothers finish their quests (books one and two).

Alastair punishes himself by remaining at sea.  Without his feet on the ground, his powers are weakened. He suffers greatly, overcome with guilt, a sense of unworthiness plagues his very existence. Will he take up his own quest?

Fiona lives in present day, Dublin, Ireland, much the loner.  She’s always felt apart from the people around her. She has a secret ability, she is able to communicate with animals.

An intelligent researcher working at Trinity College, she is employed translating a slab found in Navan during an archeological dig.  It is written in Latin and Ogham with two words–Dragon Knight.  Fiona obsesses when she works. She always has to find the meaning behind words.  And she does in this case, but not in the way she expects. One fateful day she tumbles back to the past. She finds herself at a slave auction. Her destiny awaits.

This story is full of adventure, excitement, mystery, suspense, Fae, Fenian warriors and a dragon. Is this a combination that intrigues you?  If you are a paranormal and fantasy fan as well as a historical buff, take time to acquaint yourself with this author.  What a world she weaves with this delightful series!  Readers, indulge your senses and enjoy!

I am a lover of books, both reading and writing. 2018 marks the beginning of my own journey from writer to published author. This blog will showcase various authors' thoughts on the elements of novel crafting, and my attempts to find my voice in writing. While journaling this journey, I hope to encourage others to follow their dreams. Book reviews continue as I have the last four years, only making time for my new pursuits.
View all posts by eileendandashi →
This entry was posted in Action/Adventure, Audiobook, Audiobook Review, Book Reviews, Fantasy, Fantasy Romance, Highland Romance, Highland Stories, Historical Romance, Medieval Romance, Paranormal, Paranormal Romance, Time Travel and tagged Audiobook Review, Dragon Knight's Axe, Mary Morgan, Order of the Dragon Knights. Bookmark the permalink.