A mystery you’ll never figure out–just the kind I love, coiled with suspense. Just released, THE GIRL WHO KNEW TOO MUCH by Amanda Quick 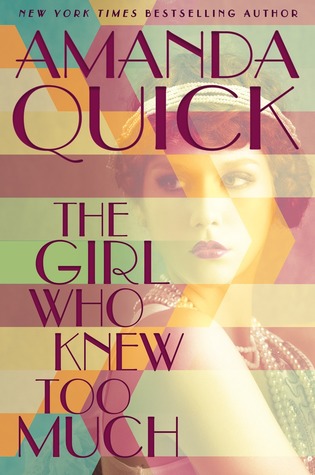 Publisher’s Summary: Amanda Quick, the bestselling author of ’Til Death Do Us Part, transports readers to 1930s California, where glamour and seduction spawn a multitude of sins…

When Hollywood moguls and stars want privacy, they head to an idyllic small town on the coast, where the exclusive Burning Cove Hotel caters to their every need. It’s where reporter Irene Glasson finds herself staring down at a beautiful actress at the bottom of a pool…

The dead woman had a red-hot secret about up-and-coming leading man Nick Tremayne, a scoop that Irene couldn’t resist—especially since she’s just a rookie at a third-rate gossip rag. But now Irene’s investigation into the drowning threatens to tear down the wall of illusion that is so deftly built around the famous actor, and there are powerful men willing to do anything to protect their investment.

Seeking the truth, Irene finds herself drawn to a master of deception. Oliver Ward was once a world-famous magician—until he was mysteriously injured during his last performance. Now the owner of the Burning Cove Hotel, he can’t let scandal threaten his livelihood, even if it means trusting Irene, a woman who seems to have appeared in Los Angeles out of nowhere four months ago…

With Oliver’s help, Irene soon learns that the glamorous paradise of Burning Cove hides dark and dangerous secrets. And that the past—always just out of sight—could drag them both under…

My Thoughts:  This well-written tale will transport you to the seedier aspects of life on the fast track of making it to the top in Hollywood.

Burning Cove Hotel is a great setting for Irene’s stubborn need to learn the whole truth while even putting her own life in danger.  She also needs to give herself closure for the women who lost their lives.   She shifts from gossip columnist to stealth investigator in a blink of an eye, determined to know the reasons why her mentor is dead.  An accident as so many say or murder?

The skills a good secretary has – efficient, organized, intelligent and determined to finish a project, help Irene surface to the top of a sinking ship.  The same skills work well for Oliver Ward, owner of the Burning Cover Hotel and once world-renown magician.  Irene’s association with Oliver proves to be exactly what she needs (as she is to him) to solve her latest mystery, and the very person who will save her neck—and surprisingly her heart.

The energy, pace, intrigue and sleazy characters you meet will give you hours of entertainment and plenty of who dun’ it theories. Delve into the seedier side of Hollywood — glamour can be only skin deep!

I am a lover of books, both reading and writing. 2018 marks the beginning of my own journey from writer to published author. This blog will showcase various authors' thoughts on the elements of novel crafting, and my attempts to find my voice in writing. While journaling this journey, I hope to encourage others to follow their dreams. Book reviews continue as I have the last four years, only making time for my new pursuits.
View all posts by eileendandashi →
This entry was posted in Historical Fiction, Mystery, New Book Release, Uncategorized and tagged Amanda Quick, Historical Fiction, Hollywood in 1930's, Murder Mystery, The Girl Who Knew Too Much. Bookmark the permalink.

2 Responses to A mystery you’ll never figure out–just the kind I love, coiled with suspense. Just released, THE GIRL WHO KNEW TOO MUCH by Amanda Quick