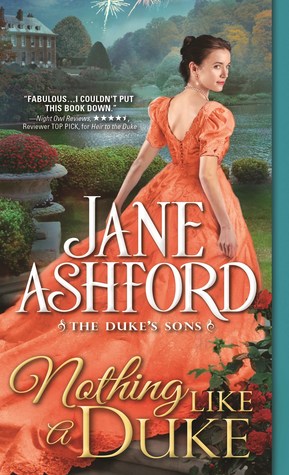 Heir to the Duke
What the Duke Doesn’t Know
Lord Sebastian’s Secret
Nothing Like a Duke
The Duke Knows Best release date December 5, 2017

She has no intention of wanting him.

But even Flora has to admit…

Lord Robert Gresham has given up all hope that the beautiful and independent Flora Jennings will ever take him seriously. He heads to an exclusive country house party to forget about the beauty haunting his thoughts.

Too bad the lady in question has no intention of being forgotten.

My Thoughts:  Author Ashford knows how to engage a reader.  First with action and danger, then humor.

I loved the relationship which ensnared Lord Robert Gresham.  He could speak his mind and be listened to. When he wanted to go somewhere, his wishes were complied with.  Dare he say those brown eyes held intelligence and understanding, knowing just how he felt?  In fact, this relationship of Lord Robert’s set the tone of the story, providing a good insight to the man himself. Plato is much more than a puppy dog.  He also knows all of Robert’s secrets and worries.

Plato became companion and confident to Lord Robert one miserable night when Lord Robert’s carriage broke down and rain came in trenches.

Robert searched for the source. He had to wait through another period of silence before he found his way to a low bush. Raising one of its branches, he discovered a huddled bit of dark fur. When he bent to look closer, a small head lifted, and dark eyes met his.

It was a dog, quite young, he thought, soaking wet and shivering. As he eyed it, the whimpering began again. The sound seemed involuntary, because the tiny creature stared at him without demand, or hope. Even as he gazed, its head sank down again, too tired, or dejected, to resist whatever fate was about to descend. The brown eyes closed.

Not only did I fall in love with this puppy, so did Robert.  Well, maybe not in love, but definitely was moved—took the puppy in.  From the beginning of the story Robert talked with the pup.

“What are you doing so far from a farm or village? He asked the dog.

“I expect it’s a sad story, and you’d rather not think about it,” Robert went on. “I don’t suppose you know Salbridge Great Hall? I’m on my way to a house party there.”

One of the dog’s ears twitched.

“No, I hadn’t heard of it either. But I understand that it’s the showplace of its district.

Robert and his new-found companion and confidant attend the house party. Highly unusual, but he could just start a fashion.

Flora, daughter of a great scholar, and quite an intelligent woman in her own right happened to be at the house party, chaperoned by Harriet Runyon, an older woman who apparently has a heart which well remembers how it is to be young.

Flora, thrust into the house party, not of her choosing, didn’t like the goings-on of the ton.  They were beings empty of character and intelligence. The one she wishes would have looked at her twice is Lord Robert.  The times they spent together within her father’s home had been full of excitement.  She and he would discuss and argue historical events. He exited her life as quickly as he had entered it.

Now, here he is at the house party.  She won’t have anything to do with him.  Obviously, he would only snub her. He, on the other hand, remembers the good times in the company of brilliant minds. He has much to discuss with Plato when they are alone!

Robert was acutely conscious of her, as if she was a lodestone to his compass. It was a mystery as unfathomable as Randolph and his lute. Robert knew prettier ladies. Many were more vivacious, more sweetly attentive. But Flora Jennings compelled his attention.

The novel has its moments of danger giving it greater depth. Additionally, it is charming, sweetly heart-warming, full of silliness and entirely worth acquainting yourself with these characters. Plato, will you come live with me?

I am a lover of books, both reading and writing. 2018 marks the beginning of my own journey from writer to published author. This blog will showcase various authors' thoughts on the elements of novel crafting, and my attempts to find my voice in writing. While journaling this journey, I hope to encourage others to follow their dreams. Book reviews continue as I have the last four years, only making time for my new pursuits.
View all posts by eileendandashi →
This entry was posted in Action/Adventure, Book Reviews, Historical Romance, New Book Release, Regency Romance, Romance and tagged Historical Regency Romance, Jane Ashford, Nothing Like a Duke, The Duke's Son Series. Bookmark the permalink.