Just Released: NEVER TRUST A PIRATE by Valerie Bowman ~ get your fill of spies who pose as pirates, all under humorous circumstances ~ I felt I was tripping over them! 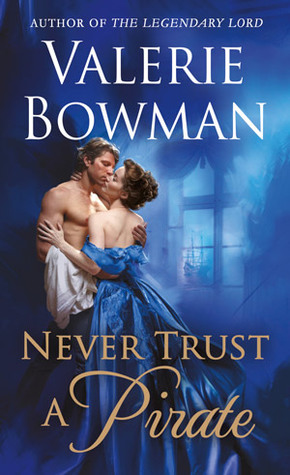 The Unexpected Duchess
The Accidental Countess
The Unlikely Lady
The irresistible Rogue
The Unforgettable Hero — novella
The Untamed Earl
The Legendary Lord
Never Trust a Pirate
The Right Kind of Rogue releases Oct. 31, 2017

The rules of engagement were never so scandalous. . .

A rumored pirate and the scurrilous black sheep of his well-to-do family, Cade Cavendish relishes his world of rebellion, deception, and seduction. Nothing and no one can hold him to be the duty-bound, honorable man he is expected to be. But when an unexpected run-in at his twin brother’s estate with a ravishing, raven-haired maid leads her to believe he’s actually a viscount, Cade’s renegade life is thrown wildly off-kilter. And even though a case of mistaken identity can be quickly set to rights, matters of the heart are quite different…

Miss Danielle LaCrosse is startled to learn that the handsome gentleman who radiates sin and has the devil in his eyes is not her employer the Viscount, but rather his infamous brother. A former heiress, orphaned and left penniless, Danielle has more than a few secrets of her own. Cade may be skilled at coaxing even the most hidden desires out of Danielle but can he earn her trust—and win her heart—as they embark on an adventure to confront a dangerous enemy from both of their pasts . . . and uncover the identity of the so-called Black Fox along the way?

My Thoughts: Author Valerie Bowman runs a tight ship in this action-packed story of characters filled with secrets.  She, herself, keeps secrets so well, that at the time I hear the truth, it is hard to believe!

There are spies aplenty in this read.  We know Cade is a pirate and spy.  But whose side is he on?  His twin brother Rafe spies for England. But does he?

Rafe hasn’t seen his brother for ten years and suddenly he presents himself at his home.  Highly suspicious movements, particularly when he keeps late hours, comes back to the townhouse battered and drunk.  Whatever happened to the brother Rafe thought he knew?  Some point out Rafe is the while sheep of the family while Cade is the black one.

Cade is but covering the man he is, where neither Rafe nor the reader knows, at least, not entirely. Cade covers his activities by playing the gad about rogue.  He’s more, much more than that as we become privy to his activities.

Lady Daphne, Rafe’s wife, is not a snob like much of the ton.  She is sweet, considerate of her staff and friendly. Humorously, she, too, is a spy, half French, half English.  I’m sure her story is in the previous books of this series.

A new Lady’s Maid comes to work for Lady Daphne, as her previous one leaves her service quite suddenly. Danielle is a spy, usually impersonating a cabin’s boy on a ship.  She’s been doing that for years.  She spies for General Grimaldi who has now set her up to spy on Cade.  With a crash course on what a Lady’s maid does, she does an admiral job for Lady Daphne. Never having a friend before in her life, she warms to the lady of the house, Mary, one of the serving maids and the housekeeper.  I think this is the most heart-warming part of the story.

Danielle uses the money she makes at the  Cavendish home to pay rent and supply her mum with medication. She has consumption. General Grimaldi has taken care of Danielle’s mum ensuring Danielle will continue spying for him. Where else would she get the money?

Lafayette Baptiste is a man Danielle would like to kill.  Apparently, Baptiste has lots of enemies because Cade is after him, too.

Cade and Danielle are so well matched in disposition.  Their banter is a bit crude, however entertaining and witty.  But let’s not stop at that comment.  Danielle discovers what passion is all about in Cade’s arms.  She feels bad about being at the Cavendish home under false pretenses, when suddenly she’s called away by the General.  She must step away from her own personal feelings about her new-found friends and her interest in Cade.  After all, he is just a mark and she a spy.  But still…

The plot, itself, has lots of merit.  Bowman builds an intriguing, quick-paced, tension-filled story evoking various emotions, some with laughter, others with fear and still others which make you believe in happy ever after–that good people find happiness.

I am a lover of books, both reading and writing. 2018 marks the beginning of my own journey from writer to published author. This blog will showcase various authors' thoughts on the elements of novel crafting, and my attempts to find my voice in writing. While journaling this journey, I hope to encourage others to follow their dreams. Book reviews continue as I have the last four years, only making time for my new pursuits.
View all posts by eileendandashi →
This entry was posted in Book Reviews, Historical Romance, New Book Release, Regency Romance, Romance and tagged Book Review, Never Trust a Pirate, Regency Historical Romance, Valerie Bowman. Bookmark the permalink.

3 Responses to Just Released: NEVER TRUST A PIRATE by Valerie Bowman ~ get your fill of spies who pose as pirates, all under humorous circumstances ~ I felt I was tripping over them!