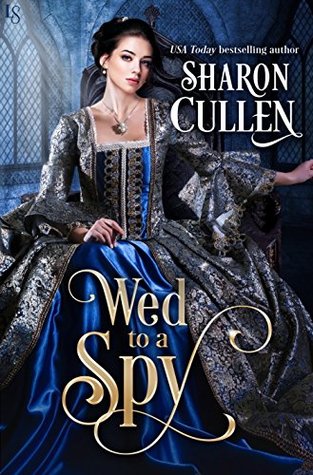 Publisher’s Summary:
Blistering seduction meets international intrigue in the Highlands as a veteran spy infiltrates the court of Mary, Queen of Scots. There he matches wits against a tantalizing enemy: his new wife.

Simon Marcheford wants nothing more than to settle down on the land bestowed upon him by the English crown. Queen Elizabeth, however, is not about to let her best spy retire so easily. Simon will have his reward, she decrees, after he completes one last mission in Scotland. But no sooner has he sussed out a diabolical plot up North than Queen Mary weds him to her cousin—an exquisite beauty with troubled, soulful eyes—and orders Simon to watch her every move.

Aimee de Verris is no spy. But her life may depend on becoming one. Banished from the French court by Catherine de Medici, Aimee finds herself tasked with reporting on Queen Mary’s activities in Scotland, where she’s unnerved by the frigid weather and brutish customs. Worst of all, Aimee’s been married off to a most uncouth lout. But when murder strikes, she learns to appreciate Simon’s talent for shielding her with every inch of his muscular frame. If Aimee desires her husband, perhaps she could trust him—or even love him.

“Fans who crave a bit of mystery mixed with their romantic historical fiction will be drawn to this story of love, loyalty, and honor.”—Library Journal, on Sutherland’s Secret

And look for more of her delightful historical romances:
THE NOTORIOUS LADY ANNE | LOVING THE EARL | PLEASING THE PIRATE | HIS SAVING GRACE | SEBASTIAN’S LADY SPY | THE RELUCTANT DUCHESS

Includes an excerpt from another Loveswept title.

My Thoughts:  Anytime I have the opportunity to read one of Sharon Cullen’s novels, I will.  She is an auto-buy for me—I started following her when she first started her writing career and look forward to every read. This advanced copy is provided to me by the publisher for a review and all my opinions and comments are freely given.

Wed to a Spy is humorous at times, although there is plenty of suspense, danger and action-packed scenes.  I enjoyed how Cullen’s gave us a glimpse into the events in history involving Queen Mary, her relationship with Queen Elizabeth of England and her association with the king of France.

I appreciated Aimee’s struggle with her task as a spy, her innocence, yet manipulated by her own country’s powerful people, including those she experiences in Scotland and then again in England.  She’s a spy, but not of her choosing and certainly not from any ability she has.  Queen Mary soon realizes she is there to watch her and report to France. With a twist of ‘I’ll get even’, she decides to wed Aimee to Simon, who she thinks also an English spy.

The couple are given no choice.  They marry, they escape the danger of  Queen Mary’s treachery at court.  They are then listed to be brought in with treason on their heads.  A painful way to begin a relationship, but this danger only brings these two spies together–trust is necessary to come out alive.

I adored Simon who honored his marriage vows even though he is coerced into marrying Aimee.  He protects her, respects her and eventually falls so deeply in love with her, you will start believing in arranged marriage!   I also approved of Simon’s concern for other spies left behind in Scotland.  He has made fast friends with Tristan and Will, two men I hope to read about in the sequels.

Simon learns his little French woman has more gumption than he first thinks, and  strength, both physical and emotionally, which does her in good stead and saves his backside.

The story is fast-paced, humorous, suspenseful and easily read in a very short time, a page-turner you won’t be able to put it down.  Passion and love will clutch your heart before you turn the last page.

I am a lover of books, both reading and writing. 2018 marks the beginning of my own journey from writer to published author. This blog will showcase various authors' thoughts on the elements of novel crafting, and my attempts to find my voice in writing. While journaling this journey, I hope to encourage others to follow their dreams. Book reviews continue as I have the last four years, only making time for my new pursuits.
View all posts by eileendandashi →
This entry was posted in Action/Adventure, Book Reviews, Highland Romance, Highland Stories, Historical Romance, New Book Release, Romance and tagged historical romance, Scottish romance, Sharon Cullen, Wed to a Spy. Bookmark the permalink.