Audiobook Review: THE PLAYER by Stella Riley ~ a Regency listen which ensnares you body, mind and soul 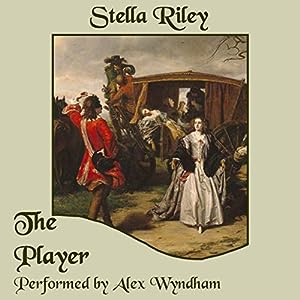 Publisher’s Summary:
Tragedy drove him into unwilling exile. Death demands his reluctant return. In the decade between, he has answered to many names and amassed a variety of secrets. Now the actor known to Paris as L’Inconnu must resume his real identity and become Francis Adrian Sinclair Devereux, Earl of Sarre…a man he no longer knows how to be and whose name, thanks to the malice of a friend turned enemy, remains tarnished by an old scandal. Revenge, so long avoided, slithers temptingly from the shadows.

Granddaughter of a wealthy wool-merchant, Caroline Maitland is not finding her society debut either easy or enjoyable…but, to Marcus Sheringham, she is the perfect solution to his crushing mountain of debt. Knowing she will be married for her money, Caroline never believed she would find love; but neither did she bargain for a certain charming French highwayman…and a surprising turn of events. The stage is set, the cast assembled, and the Duke of Rockliffe waits for the curtain to rise. In the wings, Lord Sarre prepares to make his entrance. He doesn’t expect to be greeted with applause.

My Thoughts:  I was eager to continue reading this series.  Or perhaps I should say, listening.  It is as amazing as book two and perhaps a little more so, since we are introduced to Francis Adrian Sinclair Devereux, a man who impersonates so many characters he has lost sight of who he is – and then suddenly finds he must play another part, the new Earl of Sarre.

We meet Bertrand, a three-dimensional, well-developed secondary character whose presence in the story adds depth and understanding to the man Adrian is.  Riley paints a rich palette of society with enticing supporting characters.  Her characters depict people in different walks of life, of various social standing and morals.  They, in themselves, are a pleasure to experience.

A decade away from home, Adrian is now obliged to return. A distasteful event because he rather keep it buried — too much hurt with a scandal, death of the woman he loved, and parental rejection.  He enjoyed becoming his own man in France, and was able to forget the pain of the past.  Two talents saved him from poverty – acting and counting cards and both he excels at.

His brother, heir to the Earldom dies in an accident.  If Adrian values his heritage he must return.  He is the new Earl, but the scandal is not forgotten.  His once-best-friend Marcus Sheringham keeps it alive for his own purposes.

Caroline Maitland knows she’s not particularly pretty, and knows well her suitors are those who are after her wealth left to her by her grandfather.  She has no title.  Her mother and half-sisters are village bred with fine values, but their manners and manner of speech, do not fit into Polite Society.  Caroline’s grandfather made sure she had the best education. Unfortunately, Caroline sells herself short and is ready to have Marcus court her.  He’s polite above all else, but she feels he’s somehow not genuine in his character, nor do his pretty words ring true. Her family needs taking care of, her half-sisters need to be introduced to society.  She loves them and thinks this is the best she can do.

Marcus Sheringham is on Adrian’s hit list.  He will bring him down.  Marcus is already well on his way, so it takes little effort on Adrian’s part to bring him to financial ruin.  But if he marries Caroline Maitland he may be able to regain his balance.  Watch out for Marcus!

I am particularly fond of Adrian’s role when he impersonates, Duvall, a French highwayman. He captures Caroline’s heart and I believe her elder companion, Lady Brassington thought him quite romantic, even though he stole her pearls. He certainly had my heart beating a bit faster.

Wyndham is superb with Duvall’s voice and accent as he is with the other men Adrian impersonates.

It’s interesting how Adrian becomes the characters he plays.  He is able to lose himself within the roles.  In particular, he enjoys Duvall who is complete opposite to his present role of Earl of Sarre.

The Earl of Sarre is a cumbersome role for Adrian. He is rather stoic and unemotional.  When both Duvall and Adrian (both the same man remember) show interest in Caroline, her heart picks Duvall. When Sarre’s becomes interested in Caroline for himself, how can he turn her attention to him and drop the highwayman without exposing his secret and suffering her wrath?  Would she be able to forgive him? It is all rather complicated and deliciously funny!

Wyndham is a marvelous talent.  He shadows and perfectly executes Riley’s words, the characters become real, breathing people.  When the moment demands it, his pacing quickens, lending edginess to the story.  I admire his talent and thrill to the listen. His tone and inflection in dialog are perfectly voiced, and all his characters’s voices are unique and easily recognized.

I hope you jump on the band wagon and begin reading this series.  I highly recommend it.

I am a lover of books, both reading and writing. 2018 marks the beginning of my own journey from writer to published author. This blog will showcase various authors' thoughts on the elements of novel crafting, and my attempts to find my voice in writing. While journaling this journey, I hope to encourage others to follow their dreams. Book reviews continue as I have the last four years, only making time for my new pursuits.
View all posts by eileendandashi →
This entry was posted in Audiobook, Audiobook Review, Book Reviews, Historical Fiction, Historical Romance and tagged Alex Wyndham, Audiobook Review, Rockliffe Series, Stella Riley, The Player. Bookmark the permalink.

7 Responses to Audiobook Review: THE PLAYER by Stella Riley ~ a Regency listen which ensnares you body, mind and soul