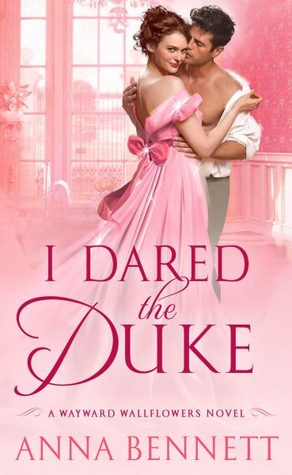 DARE TO FALL IN LOVE

Alexander Savage, the Duke of Blackshire, is known throughout the ton for three things: the burn scars on his neck, his ornery disposition, and the trail of broken hearts behind him. None of which would concern Miss Elizabeth Lacey in the least—if she weren’t living under his roof. As his grandmother’s companion, Beth is all too concerned with the moody and compelling duke. Incensed by his plans to banish the sweet dowager duchess to the country, Beth refuses to do his bidding. If Alex wants her help, he’s going to have to take her dare…and grant her three wishes.

Alex adores his grandmother, which is precisely why she must leave. A string of unfortunate incidents has him worried for the safety of everyone around him—including the dowager’s loyal and lovely companion, Beth. But the notorious wallflower isn’t as meek as she appears, and as their battle of wills heats up, so does Alex’s desire. He’s dangerously close to falling in love with her…and revealing secrets he’d rather keep hidden. How can he convince her that his darkest days are behind him—and that, for the first time in forever, his heart is true?

My Thoughts: The tone of the story is set from the outset.  I’m prepared to laugh and enjoy!

Elizabeth Lacey, Beth that is, is a terribly kind woman who wants to make everything right, certainly right wrongs and restore harmony between people.  She is companion to Alexander Savage, the Duke of Blackshire’s mother, Dowager Duchess of Blackshire.  The Dowager is a little bit of a match maker which I find endearing.  She also has lots of spunk and totally lovable and quick-witted. Beth feels very protective of the women and works against Blackshire’s desire to have them both out of his townhouse.

Beth, dragging her feet as much as possible, makes a bargain with the duke to allow three wishes to his grandmother.  She then will acquit the residence wondering how she will convince the dowager since she loves the active life of London.

Not informed of the truth of the situation, Beth assumes so much about the relationship between Blackshire and his grandmother.  She puts herself between what she perceives as a wrong done to his grandmother and Blackshire’s seemingly selfish motives.

The dowager is happy with her new companion and Beth found it isn’t difficult to make her happy.  Older people want the same as anyone – to be heard and respected.

Beth is the middle sister of the women known as the Wilting Wallflowers – known for three years as such and coined so by none other than Blackshire.  Would the duke dare tell Beth, especially when his feeling for her are deepening?

The duke is one of those duke’s with the ‘better than thou attitude’, yes, the typical duke.  What is it about power anyway?  But his redeeming quality is he truly wants to keep his grandmother safe.  Someone is out to kill him.  But who? Will they also try to harm his grandmother and even Beth?

Beth has spunk and she doesn’t let him get away with it.  And that my dear reader, is what catches the fellow.  But not before he puts his foot in his mouth when he tries to explain why he should feign interest in Beth to try to capture the killer.

She shook her head, incredulous. “You think that your interest in me will cause other gentleman to hold me in esteem?”

Miss Lacey gasped, clearly horrified by his attempt to explain. “How dare you compare me to a dog? She snapped.

“Your charming little metaphor was not entirely beyond me, your grace.”

He shrugged. “Apparently, it was.”

Narrowing her eyes to slits, she stepped toward him. Close enough for him to see the subtle rise and fall of her chest.

“I followed your meaning. Now allow me to explain something to you.” She spoke slowly, anger dripping for each word. “I am not the bone. But if I were, I wouldn’t be caught dead in your mouth.”

Alex is a good duke, his grandmother’s protection tantamount.  He’s unable to convince Beth without telling her the complete story.  This lends to a rather funny story until the situation is laced with nail-biting fear.

Author Anna Bennet is an author I haven’t read.  I enjoyed the story and recommend the series to those who enjoy Regency reads with danger, humor, feisty heroines and dukes way beyond their depth!.

I am a lover of books, both reading and writing. 2018 marks the beginning of my own journey from writer to published author. This blog will showcase various authors' thoughts on the elements of novel crafting, and my attempts to find my voice in writing. While journaling this journey, I hope to encourage others to follow their dreams. Book reviews continue as I have the last four years, only making time for my new pursuits.
View all posts by eileendandashi →
This entry was posted in Book Reviews, Historical Romance, New Book Release, Regency Romance, Romance and tagged A Wayward Wallflowers Novel, Anna Bennett, Book Review, historical romance, I Dared the Duke. Bookmark the permalink.