Audiobook Review: DEVIL’S DOMINION by Kathryn Le Veque ~ be prepared to lose yourself to the Devil 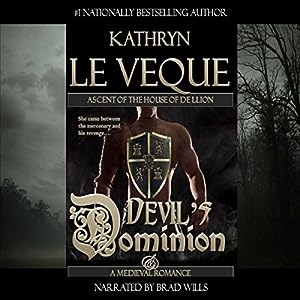 AD 1205 – it’s years after The Dark Lord Jax de Velt tore through the Welsh marches and captured several castles. Still he holds lands that do not belong to him. Out of the ashes from this dark and lawless time rises the son of one of the men Jax de Velt put to the stake. Bent on revenge against The Dark Lord, Bretton de Llion has grown up in obscurity, hidden from de Velt’s rage, and has learned to hate the very world around him. His sense of vengeance against de Velt has been his guiding force for years. Gathering a powerful mercenary army, Bretton rages through Wales, emulating de Velt’s reign of terror, killing and destroying, moving toward a target he has long planned for — abducting one of Jax de Velt’s children in order to lure Jax into his trap. Discovering that Jax’s eldest daughter is a novice nun at Alberbury Priory, he burns down the priory in his quest to abduct Lady Allaston de Velt. Successful in his endeavor, he sends word to de Velt: Come to me, or your daughter will suffer. His perfect revenge is planned.

But it is not so perfect when this warrior, who has never known love or kindness, discovers feelings for the daughter of the man he has hated his entire life. Join Bretton and Allaston in a very complex journey of terror, sadness, and the ultimate conquest – love. Old friends such as Christopher de Lohr and Keller de Poyer join Jax de Velt as integral parts of this riveting Medieval tale.

Can Allaston prevent Bretton from killing her father? Or do old hatreds burn too deep? Enter the Devil’s Dominion at your own risk.

My Thoughts: If you’ve followed my reviews and blog, you’ll know how much I love what and how Kathryn Le Veque writes.  As I read her books, I find no matter what series I’m reading I re-acquaint myself with characters from previous books.  It’s like reading one huge series which never ends and I hope it never does!  Yes, I’m in love with this author.

Her books are full of suspense, danger and passion.  This one is no different.  Coupled with the darling of narrators, Brad Wills, I weep with pure delight in the listen.  Narrator Wills’s various voices for the young, old, whether woman, man or child’s, he will take you into the most wonderful world of all – the Le Veque novels.  A narrator, seriously, can make or break even a good read.  He’ll take a wonderful story and power it up ten-fold.  Did I say how much I enjoy this narrator?

We all know the power of these huge knights of old.  Bretton de Llion has the right to be embittered, seeking revenge. What Jax De Velt did all those years ago haunts many a knight’s mind.  I read Dark Lord whose main character is a man who reigns with a vicious fist.  Then love happened and Jax changed.  We all know love changes people.   He no longer picks up his sword and for 25 years he’s lived quietly and private with his family.

Even though Jax De Velt is good at killing everyone when he takes a castle, apparently, he misses a few and this particular case, a five-year-old boy who loses his parents. In consequence, he led a disgustingly ugly life and blames all that happened in his youth on Jax De Velt. He has layed his plans well.  He will make Jax De Velt wish he were never born.  He seeks revenge with a vengeance.

Bretton de Llion grows into a mighty warrior, systematically taking back all the castles which De Velt took all those years ago.  What is worse, he uses the same methods – running a stake through their bodies, men, women alike, leaving them staked just outside the castle to die an agonizingly painful death. Can we learn to forgive this man?  Can Bretton forgive Jax De Velt?

Bretton finds his path to revenge. He captures Allaston, Jax’s daughter, from a nunnery.  He puts her into a dank, dark dungeon for close to three weeks.  Her health is failing but he needs her alive so he pulls her out.  Allaston is a strong woman, not one mean bone in her body.  She’s also very wise.  Perhaps, destiny chose this woman to heal a lost soul. For surely, Bretton is lost.

Can she reach Bretton’s heart before he kills her father?  Does he even have a heart?  Can he undo the man he has become?

Emotive, heart-breaking, poignant scenes, reduce me to tears.  However, Le Veque never leaves the reader without a happy ever after.  I hope you love this story as much as I do.  Remember, if you purchase the Kindle book, you have access to the audio for practically free.  Take the audio because you cannot miss this story as Narrator Wills tells it. Marvelous! I applaud them both.

I am a lover of books, both reading and writing. 2018 marks the beginning of my own journey from writer to published author. This blog will showcase various authors' thoughts on the elements of novel crafting, and my attempts to find my voice in writing. While journaling this journey, I hope to encourage others to follow their dreams. Book reviews continue as I have the last four years, only making time for my new pursuits.
View all posts by eileendandashi →
This entry was posted in Action/Adventure, Audiobook, Audiobook Review, Book Reviews, Dark Romance, Romance and tagged Audiobook Review, Brad Wills, Devil's Dominion, Historical Medieval Romance, Kathryn Le Veque. Bookmark the permalink.