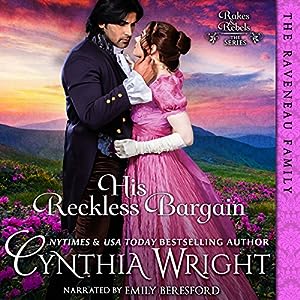 Nathan Raveneau, son of Andre & Devon (Silver Storm), is known as “The Scapegrace” in Regency London for his rakish exploits and devastating good looks. He is also a sea captain with an estate on Barbados. To gain land near his enemy, Xavier Crowe, Raveneau agrees to act as protector to headstrong Adrienne Beauvisage – and keep her chaste until her 21st birthday.

Adrienne is both outraged and intrigued by the man who calls himself Nathan Essex. She knows little of the threats that lurk at the English castle of eccentric Lady Thomasina Harms… or of the daring that Raveneau, in his guise as Nathan Essex, must employ to keep her out of harm’s way.

A Reckless Abduction…As the powerful attraction between them builds, Nathan is forced to abduct an unwilling Adrienne, boldly spiriting her away to his ship. In a rousing adventure that carries them from Regency England across the sea to magical Barbados, Nathan and Adrienne struggle against a compelling and passionate love while caught in a growing web of danger.

Don’t miss this enchanting novel that unites the Raveneau and Beauvisage families!

My Thoughts: Adrienne is quite the handful – full of life, quick-tempered and believes she can take care of herself and direct her future. NOT!  Her father, who wants her to feel independent, is quite concerned about her work as a governess (she is set upon by her employer) and now companion to an elder woman, Lady Thomasina Harms.

He has requested Nathan Raveneau, son of his old friends Andre and Devon, to be her protector, a guard, of sorts, to keep ill from her door.  (Is that possible with this girl?) Her father reads a menacing missive from her last employer, which Adrienne had carelessly torn up and trashed. Her father pieced it together. How can he give his daughter her head and protect her at the same time?

Nathan would rather have nothing to do with the chit, but Adrienne’s father sweetens the pot by telling him if he could protect her and keep her chaste until she’s 21, he’ll give him some very vital land in Barbados.  The land abuts next to his own and more importantly provides him a clever means to keep an eye on Xavier Crowe, a land pirate and dirty trickster, doing immeasurable harm, living on the east side of the island. Under guise, as Nathan Essex, he begins his employment attaching himself to Adrienne, and the fun begins!  Not for him, not for her, but for us!

Adrienne is such a soft-hearted individual.  She’s concerned about Lady Thomasina once she gets over her peculiar ways of organizing her library books. Books are not organized by author, nor title, but by color. Her son has his eye on Adrienne, thinking she might be a good catch for him – she certainly treats his mother well, and will keep her from brow-beating him with her eccentric ways.  I’m not sure just how evil he is, but I know he’s weak-kneed and is hoping to enjoy his mother’s wealth, along with Adrienne’s vibrant beauty.

Angus is a little dog belonging to Lady Thomasina, whom she dotes on and seemingly he, her.  He plays an important role in this story by exposing Lady Thomasina’s eccentricity and her son’s mean spiritedness. It’s obvious there is more to Angus than meets the eye.

Narrator Emily Beresford does an admiral job in playing the voice of Adrienne.  I can fairly see Adrienne darting here and there with her buoyant personality.  Lady Thomasina is well-played, too, with her somewhat cantankerous and selfish spirit.  The voice of Lord Harms, in my opinion, was too drawling—it made the voice not quite believable.  But one thing it did do, was make me dislike him.  Maybe that was the narrators ploy all along. Nathan’s voice also didn’t quite ring true.  His inner good is well hidden, where I felt it should show itself more.

I’m glad I listened to the read.  I enjoyed the character-driven plot with many a scene full of emotions.  I loved Nathan’s secret identity and his efforts to keep it hidden and Adrienne’s silliness.  She lost sight of her intelligence several times!

I am a lover of books, both reading and writing. 2018 marks the beginning of my own journey from writer to published author. This blog will showcase various authors' thoughts on the elements of novel crafting, and my attempts to find my voice in writing. While journaling this journey, I hope to encourage others to follow their dreams. Book reviews continue as I have the last four years, only making time for my new pursuits.
View all posts by eileendandashi →
This entry was posted in Action/Adventure, Book Reviews, Historical Romance, Regency Romance, Romance and tagged Audiobook Review, Cynthia Wright, His Reckless Bargain, historical romance, Rakes and Rebels Series. Bookmark the permalink.