Third book of the series released today: THE VIP DOUBLES DOWN by lovely, talented Nancy Herkness!

Quotable Quotes from The VIP Doubles Down

“Physical therapy is not easy, so I’ve learned the art of negotiation,” Allie said, stowing the ball back on its rack.   [Gavin’s response.]     “You call it negotiation. I call it blackmail.”

She had the feeling that Gavin had depths in his soul that her ex-husband couldn’t even comprehend, much less descend into. 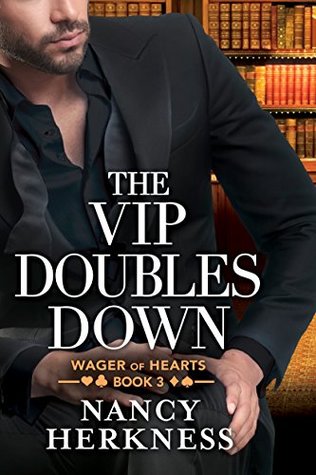 Wager of Hearts Series: ecopy purchase link
The CEO Buys In
The All-Star Antes Up
The VIP Doubles Down

In the witty, sizzling finale to award-winning author Nancy Herkness’s Wager of Hearts series, a haunted writer conquers his demons with the help of a feisty muse and a passion that doesn’t play by the book.

Gavin Miller, the billionaire author of a bestselling thriller series, struggles with a grim secret: he hasn’t written a word in more than a year.

Writer’s block is killing his spirit and jeopardizing his contracts with his publisher and his Hollywood producers. Prodded by his agent, Gavin reluctantly agrees to see Allie Nichols, a sassy physical therapist tasked with treating the novelist’s severe neck and shoulder pain—and maybe his writer’s block, too.

The tempestuous Gavin and no-nonsense Allie soon find themselves entangled in a steamy affair that sparks Gavin’s creativity again. But their manipulative ex-lovers and Gavin’s lingering childhood scars threaten their happily ever after. Can Gavin and Allie find their way to love when the stakes are high and the obstacles are overwhelming?

My Thoughts: I’ve had the pleasure of reading about the other two multi-billionaires of the series, but I’ve got to say Gavin Miller was the most interesting of all three.  Perhaps it’s because he’s a writer.  He has such a big writer’s block, one that has lasted for eight months.  That’s one of his problems.

The other is he’s part of a wager with Luke Archer, now retired quarterback, and Nathan Trainor, the CEO of Trainor Electronics.  Those two have found their true love within the year set by the wager, therefore were able to keep their precious wagered items.  But poor Gavin, hasn’t found her yet—he’s in five months, only seven more to go.  He’s in a terrible funk.  Grouchy with remarks which should put anyone off. But his friends rally round trying to help him.

Gavin’s bigger issue is his work. The people who’ve made movies from his book series, Julian Best, are talking ghostwriters to continue the story. The man is in such pain, muscles coiled so tight he’s starting to walk awkwardly.  His agent, Janet, decides to get him a physical therapist. In walks Allie Nichols, a woman of strong character, equally dedicated to her profession.

Allie recently is divorced.  She isn’t interested in men, just her career.  Her ex can’t seem to let go, however.  She has a restraining order against him.  It doesn’t matter as he keeps showing up talking to her about his own career, acting. He’s lost her one wonderful job, will he make her lose another?

Allie’s grown up since her first marriage, and doesn’t want to get involved.  When she gets the job to help Gavin with his physical difficulties, he has other ideas.  He doesn’t need PT, he needs a muse. She needs a job and doesn’t need another entanglement with another artistic man.

This story is full of wit, quick banter between Gavin and Allie and hot, steamy scenes between the two.  Author Herkness shows the vulnerability of being a writer.  No matter how wealthy one is, they still need caring friends. Gavin, a complex character is full of surprises, even surprising himself.  If you are so unfortunate not to have a billion dollars at your disposal, Herkness will take you into their world.  I loved it.  And I loved the series in its entirety!

I am a lover of books, both reading and writing. 2018 marks the beginning of my own journey from writer to published author. This blog will showcase various authors' thoughts on the elements of novel crafting, and my attempts to find my voice in writing. While journaling this journey, I hope to encourage others to follow their dreams. Book reviews continue as I have the last four years, only making time for my new pursuits.
View all posts by eileendandashi →
This entry was posted in Book Reviews, Contemporary Romance, New Book Release, Women's Fiction and tagged Book Review, Nancy Herkness, The VIP Doubles Down, Writer's Block. Bookmark the permalink.