DEMON CURSED ~ an urban fantasy which only gets better, penned by a devilishly good writer, Karilyn Bentley

Posted on April 8, 2017 by eileendandashi 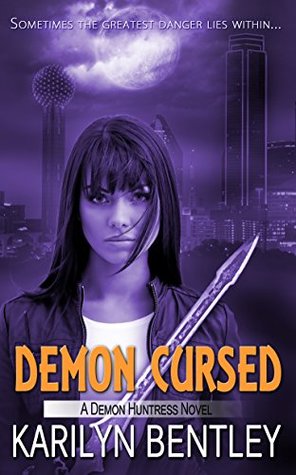 Publisher’s Summary:
Gin Crawford, the world’s newest demon huntress, just wants to enjoy a football game, but finds herself hunting a serial killer minion instead. When his victims turn out to be the local football star’s female fans, she must determine if the player has joined forces with the minion, but her efforts lead her deeper into danger. When her mentor, Aidan Smythe, is attacked, Gin resolves to go to any lengths to save him, even if it exposes her most tightly held secret. Minions and demons, however, aren’t the only terrors she faces. Will she realize the greatest danger lies within—before it’s too late?

My Thoughts:
Simply put.  I just love this story. It’s silly, scary, sweet and on top of that, there’s intrigue! A good story is built one sentence at a time. Karilyn Bentley writes some beauties, captivating all my senses.  How does she do this, hmm?  I marvel at so many sentences, just stop reading, to reread them.  They very often are snarky with bold remarks, said in an unusual way.  I also love how the author paints a picture in my mind by these spellbinding sentences.  Cases in point quoted from the book.

The sirens grow closer, an ear-piercing wail of sorrow.

I shove to a stand and open the door. A dull clack of fingers typing on a keyboard echoes through the house punctuated by the age-old rhythm of T’s headboard thumping against the living room wall.  How Smythe works with that racket, I’ll never understand.

Despite the lack of a full moon, the emergency room was packed with a variety of illnesses and accidents, dooming the staff to employ their iron bladders.

Fluorescent lights buzz an uneven tune as I head to my car.

Lucky for me the doorbell uses that moment to ring.

This whole series is written in first person, present tense with Gin’s point of view.  Writing this way, Bentley puts the reader smack dab in the middle of demon and minion killing.

Gin Crawford, a demon huntress, is someone who can look death in the face and still say something silly.  I chuckle a lot while reading. If you’ve been following the series, you’ll know that Gin used to be an ER nurse with long hours, had a sort of boyfriend relationship with a fellow who’s now dead—unfortunately, killed by a demon. Gin is sucked into be a Justitian due to her bloodlines and the bracelet which she wears, appearing one evening in her nurse uniform pocket.  It’s tied to her nervous system, so they commute somewhat, at least on an emotional.  Gin is new to being a demon huntress, so hasn’t learned the tricks of the trade as the other twelve Justitians.

While Gin battles with minions and demons the bracelet works to deaden her pain receptors.  It also helps her finds minions, someone who works for a demon and if she’s lucky, a demon.  Lucky, for the world, to eliminate evil, but she gets pretty banged up when fighting them.  Sometimes, she’s close to death, but Smythe’s healers patch her up.

Talking about demons.  Zagan will jump through a portal in her bedroom when she thinks she’s alone, scaring me and her.  He’s decided he’s her friend.  She’s glad she isn’t his servant.  The bracelet dances a happy dance every time he pops in, which shouldn’t happen.  The bracelet normally would change two a knife, ready to kill.  Things are not what they seem with this demon.  It shall be interesting to see the additional part he’ll play in the series.  Frankly, I kind of like the guy.  Some how I think he’s playing both sides.

Smythe, the mage who is supposed to work with Gin, has become very moody.  Their relationship deepens.  But Gin has a rule.  No sleeping with the boss.  So…

I don’t want to miss the next in the series.  If you haven’t started it, you should.  It is so much fun.  I understood Bentley has finished the next one and will soon be ready for publishing. Go, Karilyn!

The publisher provided the read for review.  All opinions and remarks are solely my own, only influenced by the talent of the author.

I am a lover of books, both reading and writing. 2018 marks the beginning of my own journey from writer to published author. This blog will showcase various authors' thoughts on the elements of novel crafting, and my attempts to find my voice in writing. While journaling this journey, I hope to encourage others to follow their dreams. Book reviews continue as I have the last four years, only making time for my new pursuits.
View all posts by eileendandashi →
This entry was posted in Action/Adventure, Dark Fantasy, Fantasy, New Book Release, Urban Fantasy and tagged A Demon Huntress Novel, Demon Cursed, Karilyn Bentley. Bookmark the permalink.