Just Released: two novellas in one bundle THE TRIDENT LEGACY by Sharon Hamilton and Kathryn Le Veque ~ discover the angst two sons of Poseidon endure by being immortal 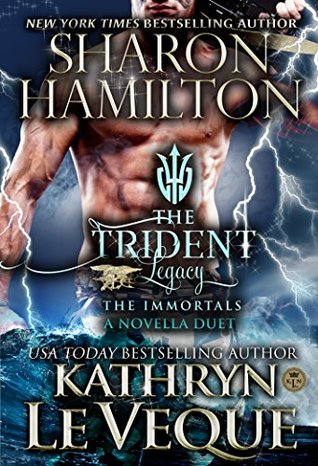 We are brothers, the Sons of Poseidon, though our mothers have gone many eons ago. Given special powers, we are required to protect humanity from the dark forces of the universe that coalesce and then plunge back into the inky pit of evil only to rise up again to be defeated.

My task is to blend in as a normal, common man. But I am not a common man. I bear the mark, and I have worn it proudly, although sometimes I find that calling more difficult than others. However, I’ve never run away from it nor deny the obligation of my birthright.

Oceans and worlds are fully accessible to me. There is only one thing that I am denied: a true love partner. I’ve loved many times, but never for evermore, only for the here and now.

It would be a lonely journey, without mother or family of my own, were it not for my brothers. But the preservation of mankind is a worthy calling, and one I shall do until the end of time, or the end of my time.

I have chosen for these next few years to live as a Navy SEAL, an elite warrior with an elite team of brothers not unlike the Sons of Poseidon.

This is my story.

Review of SEAL OF TIME BY Sharon Hamilton

Poseidon’s son, Tay, has his marching orders from his father.  He is to protect mankind, in general, and with his supernatural abilities.  Discovering a man badly wounded from action as a SEAL, he was able to heal most of his wounds and sent him to the hospital.  From that experience he decided he could be of great benefit to the SEALs, therefore he joins up.

I enjoyed the dialogue and camaraderie between the Seal team, the way they protect each other as well as slap each other around.  I enjoyed the way Tay does work that is most dangerous.  Even though the son of a god, his team are his brothers.

Marney, a woman Tay thinks has the body and voice of a siren, happens to be on part of the beach where Tay has his home, saying goodbye to her life in San Deigo.  She’s meets him and each are extremely attracted to the other.  Marney gets in a terrible car accident, and Tay is there to work his magic.  But can there be an enduring relationship between a mortal and someone who is immortal who doesn’t age?

The story, although short, is a good one, well-written with some hot sex scenes, and a sweet romance. I haven’t read this author before.  I’d like to take a look at one of her longer novels.

Review of The Immortal Sea by Kathryn Le Veque

This novella takes us from 1269 A.D. when Sir Kerk LeSander, a son of Poseidon, finds himself in a bit of a pickle.  Through the Ages he has many lives because he doesn’t age and people question why.  He’s fought many battles.  Now, his life is threatened because the locals think he’s committing witchcraft.  A mob comes after him.  He has to leave his life behind and start again. That sure would be irksome, don’t you think?

He dare not love a woman, for if he does he would lose his immortality.  So as much as he loves life, he doesn’t live it fully.  To not love is to not live, in my opinion.

Kerk’s power is the ability to command or even be the elements.  He can also heal himself, but not others.

Presently, he is in the San Diego, California area.  He finds work with the SEALs is the best place for his abilities.  While having some downtime, he meets a cop who captures his attention.  Karia has given up on men and pushes them away.  Karia is intrigues by Kerk because what she knows of him just doesn’t add up.

The relationship which builds between them is fun to watch.  Lots of bantering and chuckles await you.  Karia’s internal dialogue:

The wet tee-shirt and wet shorts were giving her an eyeful because the guy was built like a brick shithouse.

Kerk, however, can’t let her get too close.  He can’t lose his heart to her—he’s never felt like this before.  And there’s the conundrum, dear reader.

I am a lover of books, both reading and writing. 2018 marks the beginning of my own journey from writer to published author. This blog will showcase various authors' thoughts on the elements of novel crafting, and my attempts to find my voice in writing. While journaling this journey, I hope to encourage others to follow their dreams. Book reviews continue as I have the last four years, only making time for my new pursuits.
View all posts by eileendandashi →
This entry was posted in Book Reviews, Fantasy Romance, New Book Release, Novella and tagged Kathryn Le Veque, SEAL of Time, Sharon Hamilton, The Immortal Sea. Bookmark the permalink.