Just Published NO OTHER HIGHLANDER by Adrienne Basso — Review 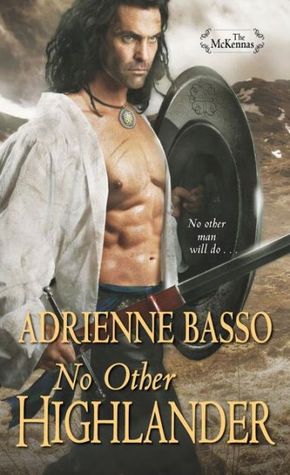 McKenna Series:
The Highlander Who Loved Me
No Other Highlander

Publisher’s Summary:
Scottish Highlands, 1334: The McKenna clan flourishes under a family of warriors, fierce and righteous, faithful to their own until the last. But to produce an heir, the widowed eldest son must risk his heart again . . .

Lady Joan Armstrong Fraser was once the indulged and pampered daughter of a laird. But marriage to a brute changed her. When he sets her aside, she has only her wits and her beauty to protect herself and her child from the chaos of her former home. She will have to find another husband—a man whose strength is more than a weapon against the weak. A man she can trust . . . if such a man even breathes.

Sir Malcolm McKenna has known Lady Joan since her childhood, a spoiled princess as dangerous as she is lovely. But when she steps forward to protect him against a false accusation, he discovers a character stronger than he guessed—and an attraction he yearns to explore . . .

My Thoughts:  Very few men want a woman who is strong-willed, sharp-tongued, and speaks what is on her mind.  I would hazard a guess that even today, a man would rather have a sweet, docile woman to do his bidding, not creating discord.  Some would, however, take the challenge. Sir Malcolm, it seems, took the challenge and was rewarded greatly with a deeply felt love.  The process of making that happen is what the story unfolds.  A story of second chances; it is also a story of knowing what you want and finding the will to fight for it.

Lady Joan could not be further from a paradigm of a woman.  She, an only child, had just about anything she wanted as a child, therefore terribly spoiled.  She hides real feelings behind a hauteur quite off-putting and consequently she is shunned by both male and female.  She is insecure.  Having been wed, now divorced, to a monster of a man who beat her verbally and physically, she uses her abrasiveness to push people away.  Her father wants to remarry and wants her out of his home.  She fears another marriage like the one she had and has every reason to run from her situation.  But where can she run?

Sir Malcolm is in a bit of a pickle.  He may have impregnated a young girl when he was highly intoxicated during one of the festivals.  Rather than fight with the woman’s clan, he is willing to do the honorable thing if he truly did have sex with the woman.

While trying to resolve the matter, he meets Lady Joan.  This isn’t the first time he’s seen her, but this is the first time his interest is engaged.  She’s a beauty with a sharp mind, but with a reputation of being cold—a fate no hot-blooded man wants. Lady Joan’s character catches Malcolm’s interest.  He finds her to his liking, rough edges and all.

I enjoyed many scenes in this story.  Author Adrienne Basso’s writing style, and steady pace building the story, is full of texture and dynamic dialogue.  Her characters are well-developed. I feel the honor that permeates the MacKennas and the strength of the clan.

The children and dog played an adorable part in the story. Lileas, a five-year-old demon on wheels, and Malcolm’s daughter is terribly funny with her insistence she is a motherless child and should be pitied.  Lady Jane has her work cut out for her. There is a saying, what goes around comes around.  You’ll appreciate what I mean when you read the story.

We are introduced to Katherine, Malcolm’s sister who I’m sure will have her own story.

We see the love between Malcolm’s mother and father and understand why Malcolm wants such a marriage.

If you are a reader who loves your hero handsome, quick-witted, just, kind and honorable step right up and read this book.  You’ll fall in love with both Malcolm and Lady Joan.

I am a lover of books, both reading and writing. 2018 marks the beginning of my own journey from writer to published author. This blog will showcase various authors' thoughts on the elements of novel crafting, and my attempts to find my voice in writing. While journaling this journey, I hope to encourage others to follow their dreams. Book reviews continue as I have the last four years, only making time for my new pursuits.
View all posts by eileendandashi →
This entry was posted in Highland Romance, Highland Stories, Historical Romance, New Book Release, Romance and tagged Adrienne Basso, Highland Story, historical romance, McKenna Series, No Other Highlander. Bookmark the permalink.