Posted on March 5, 2017 by eileendandashi

Don’t lecture me. I’ve seen too much of life and I am what I am because I am.

Few will ever point out their own flaws, but I will be the first to admit I carry the greatest one of all. I deny myself nothing and regret everything.”

In real life, sometimes the chance of amounting to anything in a world that offers nothing is contingent on believing in something.

There is only one god and one master of this universe we need to fear and his rightful name is death.

For one didn’t crawl into the minds of criminals and leave unaffected. Their grime continued to smear itself into his brain like mold spreading over aged cheese looking for blood.

She was all she had and all she would ever have in a world that tried to take everything.

No woman can believe she is loved without feeling it. 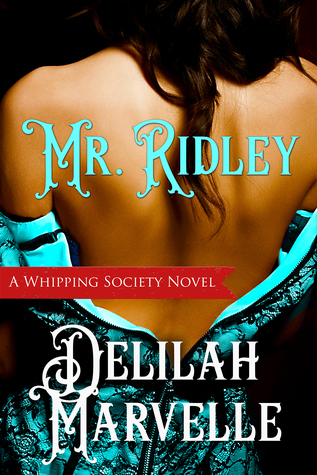 He’s all bones and she’s all sunshine.

Meet Mr. Ridley.
BOOK 1 of 3, one man and one woman bent on one passion of making the other writhe.

LONDON, ENGLAND – 1830
Criminals fear the iron fist of justice he delivers. Scotland Yard will do anything to get their hands on his mind. Whilst women? They crawl in the hope of becoming his. But only one woman is about to hold his career and his body and his mind hostage.

Jemdanee (Kumar) Lillian Watkins is a botanical savant from India who ends up getting arrested for a crime she didn’t commit. Only one man believes her: Mr. Ridley. Drawn to him and the rope he knots in her presence, she quickly realizes this overly regimented dark hero is lining her heart up for trouble.

Themes include wit, humor, mystery, history and romance. Lots of it!

My Thoughts:  It’s my pleasure to learn something from a book.  Author Delilah Marvelle spent over 100 hours of research to write this book.  If you’d love to hear about her research and some of the backstory of how she approached the story and in her own voice, listen to her video where she discusses the book and characters.  It is riveting, much like the book.

I appreciated the glossary of terms at the beginning of the read.  Some are Hindi words, some French and a few in English, providing names of torture mechanisms.  Marvelle also includes some information about the two historically real characters, Eugene François Vidocq and Mrs. Theresa ‘Elizabeth’ Berkley.

Mr. Ridley has a very dark side of him, which he cowers from by chewing coca leaves with another ingredient.  He’s able to push his past aside, to focus on the here and now.  His mission in life?  To rescue those who are falsely maligned and accused of crimes, getting great satisfaction in putting them back together, as it were. He enjoys inflicting pain on the perpetrator and (his dark secret) pain to those he would love.  He’d feel bad about that, that is, if he had a heart.  Which he definitely knows left him long ago. He is also incredibly crass and vulgar.  That being said, as the story develops I could see chinks in his armor, and while speaking very roughly, he would do something else to soften my heart and my judgement of his character.

Jemdanee. a Hindu who lives in India, but comes to England to expose her botanical skill, looks for the light of a situation and the good of people. Her soul loves nothing more than the beauty of nature, even though her past is seeped in misery.  Now, a girl of nineteen, she is beyond her physical age many times over.  Her past in India, prepared her for the events in this story and her relationship with Mr. Ridley. Where Mr. Ridley is dark in nature, hers is the opposite, a seeming balance to Mr. Ridley’s darkness.

Jemdanee is rather funny in her approach to life, very talkative and really polite. Her education in phytology and Hindi religious upbringing is not only intriguing to me, but plays a great role in the entertaining aspect of the read. There is such a cute scene where Jemdanee finds herself in rather close proximity to the lower half of Mr. Ridley.  It is when he wishes to remove her chains (she’d been falsely accused and jailed).

”Hold still.” Gritting his teeth, he turned the key in the padlock bolting her confined wrists together.

With a clank, it unhinged.

Setting the lock aside onto the desk with a clack, he quickly rose and, standing before her, slid her hands out of the iron, unraveling the long chain. “Lean forward.”

She did so and…paused. Her face now hovered near the flap of his trousers that had been uncovered by his open great coat. The textile fabric was form-fitted against a dormant but sill very sizable indentation of that male fertilizing organ consisting of a different sort of pollen.

…She leaned far back.

Ridley jerked her back toward himself. “Ey. I need you to hold still.”

She scrunched her nose, realizing she had used a botanical term for his lower half. “Your reproductive organ. You keep wagging it in my face.”

He rolled his eyes. “Pardon the wagging, but every man has one. Or did you plants never tell you that?”

This type of repartee is delightful which continues through the story.  For all her youth, Jemdanee very accurately takes Mr. Ridley’s number, but falls in love with him with all his complicated and morose look at life.

I’m sure you will enjoy the richly flawed characters, and the desperate conditions each of the protagonists must endure to grow beyond who they are. This series will be a memorable one, I’m sure!

I am a lover of books, both reading and writing. 2018 marks the beginning of my own journey from writer to published author. This blog will showcase various authors' thoughts on the elements of novel crafting, and my attempts to find my voice in writing. While journaling this journey, I hope to encourage others to follow their dreams. Book reviews continue as I have the last four years, only making time for my new pursuits.
View all posts by eileendandashi →
This entry was posted in Book Reviews, Historical Romance, New Book Release and tagged Delilah Marvelle, historical romance, Mr. Ridley, The Whipping Society. Bookmark the permalink.