Posted on February 22, 2017 by eileendandashi 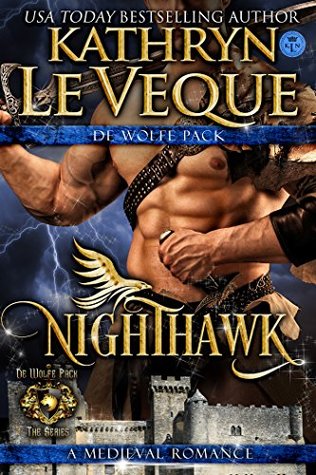 Publisher’s Summary:
1271 A.D. – The Wolfe’s greatest son is a man known as NIGHTHAWK.

Patrick de Wolfe is every bit his father’s son – cunning, intelligent, and ruthless. An enormous man with his father’s dark hair and his mother’s pale green eyes, he’s the man destined to lead William de Wolfe’s great legacy. He is so great, in fact, that the king has personally asked for his service, as one of the king’s personal body guards. On the eve of Patrick departing for this auspicious assignment, he finds himself caught up in a skirmish along the Scots border.

And a prize lands in his lap that will change his destiny.

A prize in the form of a Scots captive harboring a deadly and important secret, one that could bring war and destruction upon those who shelter her. When Brighton “Bridey” de Favereux is rescued by the powerful English knight, she is taken back to the massive fortress of Questing Castle, seat of the legendary de Wolfe family. Having known nothing but hardship and cruelty her entire life, she is surprised when they are kind to her. The English, who are supposed to be her mortal enemy, are gracious and generous. For the first time, she understands that people can be kind to each other.

And the kindest one of all is the man who saved her.

Some loves are unexpected while others are instantly realized. The love between Patrick and Brighton is something that comes from a deeper place of understanding and attraction, a powerful love that cannot be denied… but it is a love that may cost them both their very lives when Bridey’s terrible secret is uncovered.

My Thoughts: I expect a story of passion, battles, knights and personal struggles when I delve into one of Kathryn Le Veque’s story.  She never, ever disappoints me.

This superb story revolves around love – love for family, friends, of one’s country and ultimately love of a true-life partner – a tie so engulfing, so fulfilling, it’s as air to a soul.

“My love for your mother has pulled me through time and space, and continues to do so. Not even death will end it.”  Quote from Nighthawk, words from William de Wolfe, Patrick’s father

If you’ve been reading Le Veque, you’ll find her books are more than three-dimensional in their setting.  They are somehow compounded with such richly textured characters, action-packed battles where death stares you in the face, such love and understanding you wish to reside in her world for all time. As I read further into her many books, it only gets better because characters from her other novels return to us as a community of people whose lives are interwoven with each other.

Patrick de Wolfe, the youngest son of William, loves his Da, never wants to tangle (she always wins) with his Scot’s born mother, is loyal to his family, and is career driven.  A dream he’s always had, to join King Henry as his protector has come to him.  Just as he thinks he knows what is important in life, he meets a young woman, saves her life, and from this point his journey diverges.

Who could know that love could change him so?  But with his need to protect this woman, he brings danger to his own family.  Brighton de Favereux has breached the dynamics of Patrick’s world.  Patrick’s decisions and actions will try the tight-knit connections with his parents, uncle, sisters and brothers. His Da, very wise and greatly respected, butts heads with his son.  Parents always think they know what is best for their children.  Patrick needs to find his way and in this elegantly written story he does. He sees his father’s actions speak louder than his words for Patrick thinks his father has lived the example that love is the most important thing in the world—that is what he needs to discover for himself.

“I think I knew I loved her from the start,” he mumbled. “It is not a matter of defying the church or disobeying you. I had to answer my heart, Da.” Quote from Nighthawk, words from Patrick de Wolfe.

Brighton is a postulate of the priory.  She’d been delivered to the church just after she was born.  She must be returned to her position there, but can Patrick let her go? Danger, secrets and evil surround her in seemingly innocent surroundings.  Mother Prioress has hidden hurt and hatred for the Haye clan.  This is set to explode with Brighton in the middle.

As Brighton and Patrick’s budding romance takes hold, doubts plague Brighton as she realizes her total inadequacy in this new world outside of the priory.  She can’t possibly measure up to the type of woman Patrick needs.

Patrick is in new territory with this woman, too.  He realizes he loves her and wants to protect her.  There is a scene, just too funny, where Patrick wants to make love to Brighton, and he likens his wife’s body as a keep – laying siege to it much like his warrior instincts!  Brother!  Can you imagine this innocent’s reaction?  Patrick, you deserve an eye-roll, big time!

If you haven’t read any of Le Veque’s work, you are in for such a treat.  The more I read, the more I become familiar with the knights and the world of Le Veque! Wonderful reads, exciting moments and deliciously poignant scenes.

I am a lover of books, both reading and writing. 2018 marks the beginning of my own journey from writer to published author. This blog will showcase various authors' thoughts on the elements of novel crafting, and my attempts to find my voice in writing. While journaling this journey, I hope to encourage others to follow their dreams. Book reviews continue as I have the last four years, only making time for my new pursuits.
View all posts by eileendandashi →
This entry was posted in Book Reviews, Historical Fiction, Historical Romance, Medieval Romance, New Book Release, Romance and tagged Book Review, Kathryn Le Veque, Medieval Historical Romance, Nighthawk, the de Wolfe pack series. Bookmark the permalink.