Posted on February 21, 2017 by eileendandashi 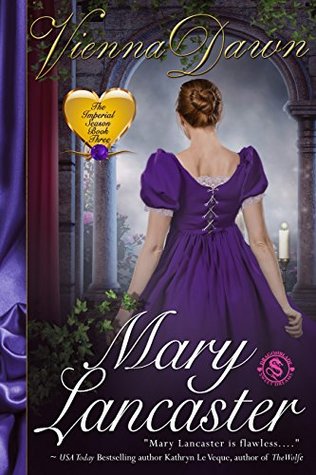 Publisher’s Summary:
En route to Vienna, where the great powers of Europe are making peace and elaborate entertainments, spirited Russian countess, Dunya Savarina, is rescued from ruin by Captain Richard Trelawny, a wounded British officer who has given up on life and happiness.

Resourcefully, Dunya secures Trelawny’s alliance in her master-plan to marry her first love. After all, having lost an arm and an affianced bride in rapid succession, the captain is clearly in need of her peculiar brand of help in his own affairs. Together, they embark upon a deception intended to win back their old loves.

Roused from indifference by Dunya’s whirlwind vitality, Trelawny adroitly handles his sham engagement, hostile family, wicked seducers, espionage, elopements, and duels, all the while protecting Dunya and trying very hard not to fall in love with her.

And Dunya begins to suspect that first love is not always the greatest love – or even the most fun.

My Thoughts:   Mary Lancaster hits a home run on this story, the third novel in The Imperial Season series.

Dunya, a Countess of Russia, good-hearted, lively disposition, full of exuberance and determined nature seeks to reunite herself with Etienne de la Tour.  She is convinced he is the love of her life, therefore, uses any means at her disposal to somehow win his love in return.

On her way with her family to Vienna, she is frustrated, angry and upset with her sister and husband, Anastasia and Nicolai. Rather stupidly, as she soon realizes, she leaves their party, to travel alone to Vienna.  Luckily, or perhaps not, she falls prey to a rake – Lord Sebastian Niven.  He lulls her into a false security, takes her to an inn for the evening and plans to have his way with her. Niven is always looking to lift a skirt, and obviously, this young innocent, with no travel companions or maid, is meant to provide entertainment.

Richard Trelawny, Captain of the 95th Rifles is man of many facets, and one I particularly enjoyed getting to know.  Dunya, trying to escape Lord Sebastian’s seductive intention dives into Richard’s room in the inn.  She quickly tells of her predicament, consequently Richard is able to thwart Niven.

Richard remembers when he was very much like Dunya, full of the need of adventure and the desire to live life to the fullest.  But the war had reduced his horizons, and now it is but a memory.  He changes his travel plans and accompanies Dunya into Vienna.  She changes his life.

Excerpt of dialog where Dunya comes up with a brilliant scheme while travelling by carriage to Vienna:

He watched her for several minutes before she drew in her breath sharply and turned back to meet his gaze. “I have a plan,” she announced.

“Go on,’ he invited, waiting to be amused.

“You and I should pretend to be engaged,’ she said blithely. “To each other.”

With difficulty, ‘Trelawny prevented his jaw from landing on the carriage floor. “We should?” he asked in fascination.

“Of course!  It’s a perfect solution.” She raised her hands from her lap counting all the reasons on her elegantly gloved fingers. “Firstly, it would help with the problem of my chaperone—at least my lack on one!–last night, with both my family and the world. Indeed Anastasia and Nicolai—and maybe even Vanya—will be terribly grateful to you. And best of all, we shall make both my Etienne and your Jane jealous? When they see us together, they’ll realize they’ve loved us all along and can’t bear us to be married to each other. In this way, you and I shall win our true loves again and be happy.”

We are quickly caught up in a society of trivial lives, where one seeks his/her own advantage, where danger lurks even in allies, where society mines are ready to trip the naïve and discontent. Lancaster paints a rich and dangerous society, yet balances it with a convergence of subplots convoluted with half-truths and assumptions to tickle any funny bone!

We meet Jane, a seemingly shallow woman, once betrothed to Richard, now betrothed to Mr. Fawcett, while Etienne de la Tour is pursuing her, looking for an advantageous marriage and win a wager.

Anastasia and Nicolai have recently married and already their marriage is on the rocks. Anastasia seeks Lord of Niven’s attentions to salve her ego, who also wants to win the same wager which Etienne is hoping to win. The wager between the two is who is able to ruin a virtuous woman first.

Will Anatasia wake up and seek love where it truly lies?  Will Jane stop playing the game of riches when she has none? Will Richard have what his heart desires? Will Etienne or Niven win the wager?

I highly recommend this series.  It sounded like it may continue.  I hope so.  Lancaster writes an entertaining, suspenseful story with class.

I am a lover of books, both reading and writing. 2018 marks the beginning of my own journey from writer to published author. This blog will showcase various authors' thoughts on the elements of novel crafting, and my attempts to find my voice in writing. While journaling this journey, I hope to encourage others to follow their dreams. Book reviews continue as I have the last four years, only making time for my new pursuits.
View all posts by eileendandashi →
This entry was posted in Book Reviews, New Book Release, Regency Romance, Romance and tagged Book Review, Historical Regency Romance, Mary Lancaster, The Imperial Season, Vienna Dawn. Bookmark the permalink.