Posted on February 10, 2017 by eileendandashi 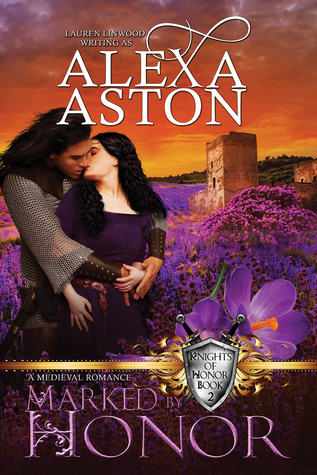 1363 A.D. – Lady Beatrice Bordel loses her mother and grandfather on the same day, leaving her penniless. With no protector and no prospects for marriage, her future is dismal. Hoping her grandfather’s oldest friend will take her in, Beatrice journeys north and is set upon by a band of highwaymen. All seems lost—until Sir Raynor Le Roux arrives.

Raynor nurses a broken heart as he returns to his home. He comes upon a scene of horror in the woods and rescues a beautiful woman who stirs strong emotions within him. When he learns that Lady Beatrice travels to her betrothed and is alone in the world, the code of chivalry that guides Raynor’s life compels him to escort her so that she may marry her intended.

But Beatrice has told Raynor a white lie, trying to protect herself, even as she is drawn to the handsome knight. As their growing attraction turns to love, her dishonesty stands in the way. Will Beatrice admit to her deception and tell Raynor the truth—or will this chivalrous knight turn away from the women he desires?

Join Raynor and Beatrice as they travel toward their inevitable destination of love.

My Thoughts:  Simply a lovely read with protagonists full of strength and honor, although each have difficulties to overcome.  It is fast-paced, with richly textured scenes, easily followed, moving the story forward in an energetic way where I didn’t lose interest in either the events or the characters.

Beatrice plunges into a new beginning, not knowing where it will take her.  After losing both her mother and grandfather on the same day, and losing her home and mother’s pearl necklace to a greedy landlord, she has little choice but to follow the plan her grandfather had for her—a journey to Brookhaven where her grandfather’s friend might help her find her way.

On the road with all her worldly possessions, she and Tolly come upon something in the middle of the road.

“What’s that?” Tolly asked, surprise in his voice.

Beatrice turned to look at the road and saw a dark shape in the middle of their path. With dusk falling, though, she couldn’t make out what the obstacle might be.

Tolly slowed the cart and leaned over to pick up the lantern. He stood and held it high.

“It’s a man. I must see to him.” The servant eased himself down from the driver’s seat and reached for the lantern to guide his way.

She climbed down from the cart, as well. If the man was injured or ill, she could help.

They approached the still figure. Beatrice checked his body, finding no apparent wounds. Perhaps a weak heart had caused his collapse.

Unfortunately, the man in the road was not only uninjured but was a highwayman, with another in the hidden in forest.

She watched in horror as Tolly’s eyes widened in surprise. He howled in pain and fell back as his hands grabbed for the buried dagger. As the stranger sat up, Beatrice ran back to the cart, the lantern swinging wildly at her side. Tolly kept an ax in the cart which he used to chop wood. She would threaten this man with it.

But as she set the lantern in the cart and reached for the ax, she found a second man waiting in the bed. He’d already opened her trunk and was rifling through it, tossing clothes and books aside. A book hit the lantern and knocked it over, spilling oil everywhere. The clothes scattered in the bed of the wagon caught fire.

This scene is very nerve wracking and shows the stuff that Beatrice is made of.  Even so, if it hadn’t been for Sir Raynor happening above the scene, the story would have been much different.

When Raynor stumbles upon a woman defending herself furiously in the road, he quickly dispatches justice, with thoughts of respect in her ability to handle these ruffians. He cannot leave the woman alone, with her servant dead, so takes her to Ashcroft. Beatrice is very quick to protect herself.  She quickly tells him she is on her way to her betrothed at Brookhaven. As expected, this places limits on Sir Raynor thoughts and actions.  But such a small lie seems to grow wings and gives Beatrice second thoughts and problems.

Nothing is lacking in Sir Raynor Le Roux. He’s a solid, fair man, honorable and kind.  Once back at Ashcroft, he sees how his brother, Peter, has let the property deteriorate.  He feels guilt, leaving his home for so many years, therefore decides to bring Ashcroft back to rights.  But has he waited too long to be home, to support his brother, Peter?

I enjoyed how Beatrice pitches in to help get the manor back in shape. In the process, she gains self-esteem, and gains respect from the servants while catching Sir Raynor’s eye for not only is she kind, intelligent and a beauty.  So bottom line:  Can Sir Raynor let Beatrice go to her betrothed in Brookhaven, after capturing his heart?  Does he even know how much he is trapped by the person she is and her beauty?

I’ve enjoyed the first two books of his series.  This book can be read as a standalone, but it is very enjoyable knowing the backstory of Sir Raynor Le Roux which lies in book one, Word of Honor.

I am a lover of books, both reading and writing. 2018 marks the beginning of my own journey from writer to published author. This blog will showcase various authors' thoughts on the elements of novel crafting, and my attempts to find my voice in writing. While journaling this journey, I hope to encourage others to follow their dreams. Book reviews continue as I have the last four years, only making time for my new pursuits.
View all posts by eileendandashi →
This entry was posted in Book Reviews, Historical Romance, Medieval Romance, New Book Release, Romance and tagged Alexa Aston, Book Review, Knights of Honor Series, Marked by Honor, Medieval Historical Romance. Bookmark the permalink.