Book Review: STEALING THE ROGUE’S HEART by Erica Monroe ~ Can love born in the slums ever be set free?

Posted on February 7, 2017 by eileendandashi 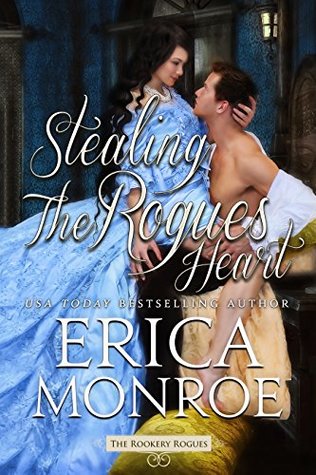 The Rookery Rogues Series:
A Dangerous Invitation
Secrets in Scarlet
Beauty and the Rake
Stealing the Rogue’s Heart

I didn’t know what a rookery was, so with the ease of getting my question answered on the internet, this is what I found.

Merriam Dictionary states it is:  a breeding ground or haunt especially of gregarious birds or mammals (such as penguins or seals); also :  a colony of such birds or mammals

Wikipedia’s definition of a rookery: The nickname rookery originated because of the perceived similarities between a city slum and the nesting habits of the rook, a bird in the crow family. Rooks nest in large, noisy colonies consisting of multiple nests, often untidily crammed into a close group of treetops called a rookery. The word might also be linked to the slang expression to rook (meaning to cheat or steal), a verb well established in the 16th century and associated with the supposedly thieving nature of the rook bird. The term was first used in print by the poet George Galloway in 1792 to describe “a cluster of mean tenements densely populated by people of the lowest class”.[1]

Thomas Beame’s The Rookeries of London (1850) also described one:

The Rookery… was like an honeycomb, perforated by a number of courts and blind alleys, cul de sac, without any outlet other than the entrance. Here were the lowest lodging houses in London, inhabited by the various classes of thieves common to large cities… were banded together… Because all are taken in who can pay their footing, the thief and the prostitute are harboured among those whose only crime is poverty, and there is thus always a comparatively secure retreat for him who has outraged his country’s laws. Sums here are paid, a tithe of which, if well laid out, would provide at once a decent and an ample lodging for the deserving poor; and that surplus, which might add to the comfort and better the condition of the industrious, finds its way into the pocket of the middleman.

Isn’t this an exciting setting to stage a romance, albeit full or suspense and dark emotions?  If so, join me in this delightful series, as I’m just starting to get acquainted with, The Rookery Rogues series.

Publisher’s Summary:
Scoundrels, thieves and rebels inhabit the rookeries–where the women are fierce and the men are dangerous.

WHEN AN UNDERWORLD PRINCESS…

Beautiful, innocent Mina Mason has led a sheltered life as the sister to the most notorious crime lord in England. Her family’s wealth and expectations keep her in a gilded cage, never able to act on her true desires. Like kissing — and engaging in far more scandalous behavior with–Charlie Thatcher, her childhood best friend. As a member of a rival gang, Charlie is distinctly off-limits.

FALLS FOR THE WRONG MAN…
Charlie Thatcher has known since he was a boy where his loyalties should lie: with the Chapman Street Thieves, who saved him from a brutal death in the dark alleys of the Ratcliffe rookery. As a bartender for the Three Boars public house, he protects his fellow brothers with his mind and his fists. But when one of those members threatens Mina’s safety, Charlie’s primal, protective instincts are triggered–and his defense of her puts them both in danger.

PASSION MAY BE THEIR DOWNFALL.

——–
Stealing the Rogue’s Heart is a dark, gritty, and sexy romantic suspense about the working class of pre-Victorian England. While it is book four in the Rookery Rogues series, it can be read as a stand-alone historical romance.

My Thoughts:   It’s a dangerous world we step into.  Gang against gang, whim against whim, the power struggle of those with little power. Rarely is good able to surface above the dirt and muck of the city slum streets where people etch out an existence, many die from each other’s blade.

The Kings and the Chapmans were rival gangs in the past, but a truce of sorts had been lasting for some time now.  Tension had slightly loosened, hence we find Mina Mason, the sister of the Kings’ crime lord at her usual place on Friday night, the Three Boars public house, in Chapman gang territory.  She is kept far from violence and ignorant to some degree about what her brothers do.  She is well-educated, with a kind demeanor and doesn’t fit within the rookery, although she has made friends with some of the woman who work in the public house. The public house is the place she can see Charlie Chapman, a bartender and her childhood friend.  They are from rival gangs, neither wants to deny the attraction, admiration and friendship which exists between them.  The hope of ever being more than that just can’t be.

Unfortunately, in such environments, the slimy, uncouth drunken men thrive and prey upon the weaker, those who can’t protect themselves.  Violence breaks out, Charlie steps in, and the story takes off.  Will Charlie survive his own gang’s punishment for hurting another gang member, just to protect an outsider? Will Mina ever be able to see Charlie again? Has she the backbone to defy her brothers, to take what she wants?

Monroe’s usage of gang and slum terminology, and the gripping and realistic brutal violence in the rookery makes this a most powerful read. Her protagonists are fighters, fighting for the life they want. Secondary characters are well-defined, giving us a glimpse of what will come in the next sequence of this series.

And with that, author Erica Monroe supplies a glossary right at the front of the book, not lost in the back.  The reader can browse the list even before reading, helping to clarify terms not in use today.  Some of them I already knew from other reads, but who would have thought a ‘loblolley boy’ is a surgeon?

I am a lover of books, both reading and writing. 2018 marks the beginning of my own journey from writer to published author. This blog will showcase various authors' thoughts on the elements of novel crafting, and my attempts to find my voice in writing. While journaling this journey, I hope to encourage others to follow their dreams. Book reviews continue as I have the last four years, only making time for my new pursuits.
View all posts by eileendandashi →
This entry was posted in Book Reviews, Dark Romance, Historical Romance, New Book Release, Regency Romance, Romance and tagged Erica Monroe, historical romance, Stealing the Rogue's Heart, The Rookery Rogues. Bookmark the permalink.