Audiobook Review: ASHES OF ROSES by Christine Pope ~ fall in love with this Cinderella fairy tale where good and purity overcome evil and wrong-doing.

Posted on February 6, 2017 by eileendandashi 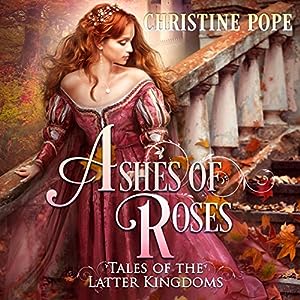 Publisher’s Summary: Even the Emperor of Sirlende cannot always do as he pleases, but when custom demands he find another bride after the death of his betrothed, a princess he barely knew, Torric Deveras  defies his counselors and changes the rules rather than make a loveless marriage.

Ashara Millende is the only daughter of a nobleman, but had her inheritance stolen from her by her unscrupulous stepmother. A servant in the house that should have been hers, she dreams of escaping the drudgery of her life and finding someone who will love her for who she truly is.

When Torric invites all the marriageable women in his kingdom to a five-day holiday of feasts, tournaments, hunts, and balls so that he might choose an Empress from among them, Ashara never dreams that she can attend, much less catch his eye and win his heart. Then a woman with hidden secrets appears who will give Ashara the chance to win her heart’s desire — if only she is bold enough to take the first step.

Christine Pope’s Ashes of Roses sets the timeless story of Cinderella in the world of her Latter Kingdoms series, weaving a spellbinding tale of royal intrigue, familial deceit, and the magic of love.

Author’s Note: While this is the fourth book in this series, all Tales of the Latter Kingdoms novels are written as standalone romances and can be read in any order.

My Thoughts:  I thought this may be another ‘Cinderella’ tale, which I’d readily read, because it is a tale hard to grow tired of.  However, it has its own unique twists and is truly very glorious, leaving me with an afterglow of extreme satisfaction where good does prevail over wicked.

I enjoyed listening to this story, told in first person, some chapters told in first person by Ashara Millende, others told by the Emperor of Selende, Torric Deveras.  Both these individuals are in cages, one gilded and one of drudgery and hopelessness.

Narrator Valerie Gilbert is terrific in her depiction of the step-mother, her moments of hysteria and her harsh treatment of Ashara are over the top.  Additionally, a very memorable moment is when the emperor’s representative spoke with Ashara questioned about where Ashara worked previous to her present station. This is when the emperor is searches for Ashara all over the kingdom.  No, there is no glass slipper here.

Torric and Ashara were smittened at first sight.  Torric has always wanted to marry for love, but when an emperor is it even possible? The story is sweet when he quickly makes his mind up after meeting some 400 women of eligibility in his realm she is the one to grace his arm as queen.  But then, she disappears!

Narrator Valerie Gilbert does such justice to this tale. She tells a tale of a man living in a gilded cage, yearning to be free and learns much from his sister to guide him to the path of happiness.

We see the palace through Ashara’s eyes.  She hasn’t seen such opulence in her life.  Author Pope creates the wonderland we dreamers wish to discover.

Ashara’s life with her step-mother and two step-sisters is nothing but drudgery.  She is ill-used where in fact, she should be mistress of their town-dwelling, for the property is left to her by her father.

The emperor is looking for a bride. Ashara’s long lost aunt suddenly appears, who happens to have some very unusual magic at her fingertips.  (Has no one told her magic is a criminal act in the kingdom?)  Will Ashara take the risk to change the misery of her life?

If you are one who loves endings full of happiness, without too much agony getting there, you’ll love this story.  It is made more perfect by its narration by Gilbert.  Her understanding of the tone of wickedness, arrogance, purity of spirit and charming princes, makes this listen even more enticing. I, for one, would love to continue reading the rest of the series.

I am a lover of books, both reading and writing. 2018 marks the beginning of my own journey from writer to published author. This blog will showcase various authors' thoughts on the elements of novel crafting, and my attempts to find my voice in writing. While journaling this journey, I hope to encourage others to follow their dreams. Book reviews continue as I have the last four years, only making time for my new pursuits.
View all posts by eileendandashi →
This entry was posted in Audiobook, Audiobook Review, Coming of Age, New Adult, Paranormal Romance, Romance, Valerie gilbert, Young Adult and tagged Ashes of Roses, Audiobook Review, Christine Pope, historical romance, Tales of the Latter Kingdomes. Bookmark the permalink.