Audiobook and Book Review: A VIKING FOR THE VISCOUNTESS by Michelle Willingham ~ a Regency time travel

Posted on February 4, 2017 by eileendandashi

A Viking warrior lives only for honor to please his gods. A Viscountess denies all pleasure waiting for a husband six-years missing. There is much we don’t understand and much we wish we could.

Title: A Viking for the Viscountess, A Most Peculiar Season, book 1 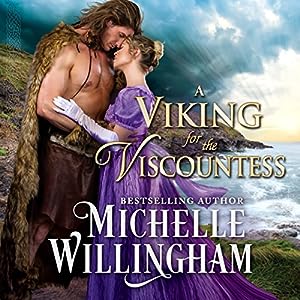 Juliana Arthur, the Viscountess Hawthorne, has been thrown out of her husband’s estate and her marriage declared invalid. With a small son to care for, she desperately needs a strong hero to rescue them from poverty and suffering.

A Viking wasn’t quite what she had in mind.

Arik Thorgrim is caught between worlds. After dying from a battle wound, he expects to find the glory of Valhalla, where he can dwell among the gods. Instead he’s brought forward 1,000 years in time, to a beautiful woman who tempts him beyond reason. Juliana doesn’t know what to do with this sinfully handsome Viking warrior who brings weapons into a ballroom and refuses to be tamed. Yet beneath his barbaric ways is a man of honor, a man who vows to face down her enemies and fight for her son’s future.

But as Arik wages a battle against her heart, Juliana is afraid of loving a man whose time has already run out.

My Thoughts: My dear reader, be careful what you wish, for you know not what forces will be in play to make it happen! And once it is realized, are you strong enough to hold on?

I love time travel. That’s a fact. I was pulled into the story from the first scene by Michelle Willingham’s talent.  Her story is so unique you won’t forget it.  I actually read this book two years ago and once I started listening to it, it all came back!  Her tale is like no other. For example, both the hero and heroine die at the beginning of the story.  One is stabbed in the back, the other drowned.  How miserable is that?

Before I get carried away about the story, I have to say something about the narrator, Brad Wills.  Remember this book is about a Viking who time travels 1,000 years into the future by the generosity of the gods.  He’s a Viking, unrefined, nothing is insurmountable nor makes him raise his voice – even when determined to use a battleaxe, kept tucked into his clothes. He’s rough around the edges and muscular like no other man Juliana Arthur has ever seen. Wills’s voice depicts this kind of man to perfection. He and the author expose the vast differences between their worlds by the very words and way they talk.

Wills also uses admirable falsetto voices for both Julianna’s maid servant and Julianna’s son.  Where Arik’s dialog and demeanor is uncivilized, Julianna’s tone and manner show through Will’s polished English accent.  Another player as this story unfolds scorns and belittles Juliana.  I can see his face through Will’s sneering tone.

Now about the story:

Juliana Arthur, a Regency woman, married to a Viscount, comes upon hard times when she loses her home of six years. Her husband has been missing, presumed dead, but Juliana remains chaste and waits for his return.  She’s a proud woman with dignity even when reduced to living in her father’s old cottage along the sea.  The cottage is more a hovel, full of holes and cold as winter begins setting in.  She needs to protect her son, Harry, just five, the love of her life. She wishes a strong hero could rescue her before they starve or freeze to death.

Taking a walk in the evening and thinking of her father, she climbs into his boat to contemplate her future, but suddenly, the sails unfurl, and she is pulled out to sea.  Knowing if she doesn’t jump the boat, no one will find her, and she’ll be lost.  That night she almost loses her life. The gods protect her in the person of Arik, the Viking.

Arik realizes all is not right and yet very right, as he takes the cold, half-dead woman into his arms, warming her skin-to-skin. The woman speaks Norwegian, his mother tongue, but doesn’t act, dress or look like any woman from his time. What kind of trick has the gods played on him? He died, of that he is sure, but where is he? He comes to the conclusion the gods are testing him to see if he is honorable enough to join other fallen warriors in Valhalla and the god Odin. By saving this woman, protecting her as she should be protected, he hopes the gods will find him not wanting.

Arik, a warrior, learns the truth of love, family, second chances, perhaps a third in this sweet, sensual story of two people from two times.  Each find what they need.  Each lose what they want. Will the gods acknowledge their hearts and desires?

I am a lover of books, both reading and writing. 2018 marks the beginning of my own journey from writer to published author. This blog will showcase various authors' thoughts on the elements of novel crafting, and my attempts to find my voice in writing. While journaling this journey, I hope to encourage others to follow their dreams. Book reviews continue as I have the last four years, only making time for my new pursuits.
View all posts by eileendandashi →
This entry was posted in Audiobook, Audiobook Review, Paranormal Romance, Regency Romance, Romance, Time Travel and tagged A Viking for the Viscountess, Audiobook Review, historical romance, Michelle Willingham, Time Travel. Bookmark the permalink.

1 Response to Audiobook and Book Review: A VIKING FOR THE VISCOUNTESS by Michelle Willingham ~ a Regency time travel