Kick up some dust in the Wild West with Eliza Knight and Annabelle Weston in HER DESPERATE GAMBLE Released today!

Posted on January 24, 2017 by eileendandashi 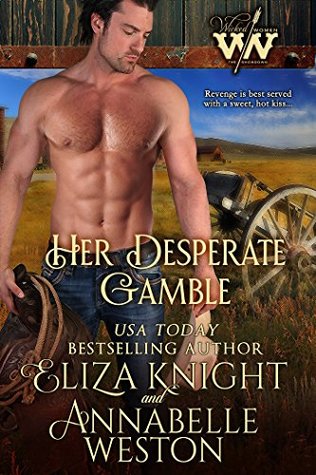 Revenge is best served with a sweet, hot kiss…

Nathan Bender is on a quest for vengeance. What he finds instead is a sexy saloon-dolly named O’Dell Murphy. She holds information he needs—and becomes a temptation he can’t resist.

O’Dell longs for a respectable life outside the saloon. When the fellow Nathan is searching for steals O’Dell’s savings, she has no choice but to go after him, or risk losing everything.

Torn between passion and revenge, Nathan reluctantly accompanies O’Dell through the Sonoran Desert.

There are some things a man can’t walk away from—and Nathan is finding it’s not revenge that binds him. It’s O’Dell, and the wicked, sinful pleasures she provides.

O’Dell, an Irish woman, had been on her own for a long time.  Women who had only themselves to rely on were prey to a woman-starved man and usually landed in a saloon,  Not a nice, tidy brothel you’d fine in Europe.  In the territories there were few women, life hard to etch out, Indians to avoid and in the Arizona desert rattlesnakes among other vicious animals such as bobcats.

When men travelled through the desert, they were reminded of their mortality over and over.  Nathan Bender is a seasoned man, knowing who to befriend and who not to.  When his family were killed days before he showed up at the ranch, he is devastated.  He is madder than heck and promises his dead brother revenge.

O’Dell Murphy also finds herself madder than heck and with the same man Nathan is, and she intends to get her money back from the slick smooth-talking son-of-a-bitch.  She’s about as angry at herself as him.  She shouldn’t have been duped. She heads out on Pearl, a horse gifted to her, in the direction of Yuma, the major town she knew the scoundrel Carleton Blakely is heading. She has no idea what she’s heading into, but meets up with Nathan Bender on the way.

Nathan Bender is honorable, he also has manners of a gentleman, but he is a drover, driving steer from pasture to market. He wants revenge for his family, and he wants to do it, not some Marshall or sheriff.  It’s his revenge. And frankly, O’Dell Murphy will only get in the way, but he can’t let her face the elements alone. She would be dead by nightfall.

Trouble is, men are trying to civilize the territories by providing sheriffs, marshalls and deputies and taking the law into your own hands is frowned upon and could very likely have you hanging from a rope.  Unfortunately, anyone who wants a gun has one (even O’Dell), and angry situations are usually settled by gunfire. To live so far west, there has to be plenty of reasons and a powerful determination to be there in the first place.

O’Dell is the fascinating character of the story.  She’s the one who discovers who she is, by jumping from the frying pan into the fire, and grows the most.  You’ll see the Arizona territory through her eyes, and it ain’t pretty. Her experience with men has her painting them with the same brush – they all want something and give nothing.  She’s adorable to watch in action, providing a lot of entertainment and surprises by her unusual means of getting the job done.  Did I not mention she is a brazen, hot-tempered woman with a curvaceous body hard to turn down? She finds her feelings toward Nathan are suspect.  She surely must just be grateful for his protection.  But her body is singing a different tune.

Ladies, get your sombreros out to cover your face from the scorching sun and hide those blushes!  Here’s to the Wild West! Cheers!

I was given an ARC by the publisher for review.  My opinions and views are solely my own.

I am a lover of books, both reading and writing. 2018 marks the beginning of my own journey from writer to published author. This blog will showcase various authors' thoughts on the elements of novel crafting, and my attempts to find my voice in writing. While journaling this journey, I hope to encourage others to follow their dreams. Book reviews continue as I have the last four years, only making time for my new pursuits.
View all posts by eileendandashi →
This entry was posted in Action/Adventure, Book Reviews, New Book Release, Romance, Western Romance and tagged Annabelle Weston, Book Review, Eliza Knight; Annabelle, Western Romance. Bookmark the permalink.