Hot off the press! LORD OF WINTER by Kathryn Le Veque

Posted on January 1, 2017 by eileendandashi 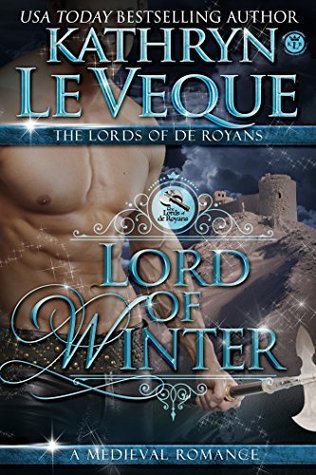 1187 A.D. – They call him the Lord of Winter. As Richard the Lionheart’s most powerful general, Sir Juston de Royans is as moody as he is skilled. Reminiscent of the ancient warrior Achilles, Juston fights when it is necessary, instead choosing to command the powerful men beneath him. Never wrong in action or command, he has never lost a battle and when he finds himself in the midst of a terrible siege at Bowes Castle, he predictably emerges the victor with the lady of the keep as his prize. And that’s when the trouble begins. When the never-wrong egotist meets the flame that will melt his frozen heart, a romance of epic proportions happens.

My Thoughts: Let’s start with Emera la Marche.  She’s the woman who eventually captures Sir Juston de Royans heart.  She’s extremely pragmatic.  Two years previous, she joined her sister at Bowes Castle because her mother and father had passed away.  But coming to be with her sister wasn’t all roses.  Her sister in the four years she’d been married was not the same sister she knew.  She’d been beaten down, the spirit and decision-making ability damaged by a tyrant husband. And it was apparent De La Roarke wanted another sister to warm his bed.

Emera’s pragmatism is tested over and over, first with De La Roarke, and then with the conquering lord who had taken over the castle—Sir Juston de Royans. Did she jump from one terror to another? When she’s got to ‘go with the flow’, she’ll do it, particularly when the consequences of not were worse.  However, she will not negotiate on her virginity.   For two long years, she’d been fighting off the lord of the castle, by any means she could.  He was a wicked, greedy man, with a poor reputation.

Sir Juston’s heart froze over long ago when he’d lost his two daughters and wife in France.  He hurt because he loved them so much, and the anguish of not being there to protect them ate at his heart, until he could feel no more. His knights saw the change, saddened, but continued loyal to their great leader.

Sir Juston’s reputation precedes him.  He’s crafty, intelligent and brutal and demanding.  People do not say no to him. EVER.  That is, until a certain blue-eyed, delicate creature does, even going so far as to slap his face. Be careful, Emera, you just may not keep what you so desperately want left intact!

Marcus Burton, Maxon of Loxbeare, Kress de Rhydian, Achilles de Dere, Gillem d’Evereux, Christopher and David de Lohr, knights loyal to Sir Juston and King Richard are knights with exceptional talent with the blade.  They are the knights who support Sir Juston in the battle to take Bowes Castle.  I’ve read of their other exploits in the many books the author has written, and it’s a pleasure to meet up with them again.

The battle scenes drive the story forward, while providing a great opportunity to see how Sir Juston’s mind works and his total trust in his knights. Other battle scenes, those of words, are equally telling as Sir Juston and Emera work through their differences.  Simply, Sir Juston wants her in his bed. Lady Emera uses all in her arsenal to stay out.  The blend of humor and fighting the enemy add much to the enjoyment.

As in all wonderfully, engaging romances, the hero’s heart melts, and the heroine finds a man she not only desire to give her body, but her heart.  Ah, a most gratifying ending!

I am a lover of books, both reading and writing. 2018 marks the beginning of my own journey from writer to published author. This blog will showcase various authors' thoughts on the elements of novel crafting, and my attempts to find my voice in writing. While journaling this journey, I hope to encourage others to follow their dreams. Book reviews continue as I have the last four years, only making time for my new pursuits.
View all posts by eileendandashi →
This entry was posted in Book Reviews, Historical Romance, Medieval Romance, New Book Release, Romance and tagged Book Review, Kathryn Le Veque, Medieval Historical Romance. Bookmark the permalink.