Review of Newly Released: GARDEN OF SHADOWS by Meara Platt

Posted on December 9, 2016 by eileendandashi 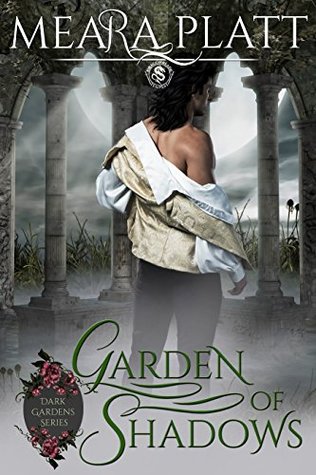 Publisher’s Summary: Danger lurks for Julia Marsden, the daughter of the late vicar of St. Lodore’s Church in the quiet village of Borrowdale.

Julia doesn’t believe in faeries or magic or dreams coming true, but odd things have been happening at the vicarage lately that cannot be explained. Her orphaned cousin, Charlie, believes in mythical creatures and claims that faeries now inhabit the vicarage’s bluebell garden. The boy also claims the faerie king, Cadeyrn, has promised to make him a prince in his kingdom and teach crippled Charlie to walk again if he will cross into the Fae realm.

As the faerie king’s influence on the boy grows stronger, another threat emerges from the boy’s uncle – Douglas Hawke, the Earl of Eastbourne, who has come to wrench him from Julia’s guardianship. Julia is determined to fight both men, but as she and the boy begin to fall under the spell of the faerie king, Julia realizes that only her love for Douglas can save them. But is Douglas capable of loving her, even at the cost of his own life

My Thoughts: It’s always enjoyable when Regency reads pair themselves with another genre.  In this case, the author delights her audience in the small village of Borrowdale, where the king of the Fae makes his court in the bluebell garden of Julia Marsden, unseen by all except, Charlie. Charlie is so engrossed in the king’s court, he draws, in great detail, what he sees.  Charlie isn’t an ordinary boy.  He has been unable to walk and move about since he was four.  The bluebell flowers bloom all year round, easily explained as fed by a warm underground spring. But is that explanation true?

When Douglas Hawke shows up at the cottage, Julia is angry.  She knows he wants to take Charlie from her. Douglas is confused.  Julia doesn’t appear to be anything but a sweet, kind soul who obviously loves Charlie very much.  Strange incidences begin happening.  The Fae king shows himself in obvious ways.  He manipulates Douglas’s feelings.  Julia begins feeling trapped.  But my whom?  Is it Douglas, whom she is attracted to, even though she doesn’t trust him, or is it the strange events that are occurring around her? One thing for certain, she won’t let the earl have Charlie.  She will protect him with her life.

Douglas Hawke, sixth Earl of Eastbourne has secrets and appears his facts aren’t in order.  Julia has secrets and is very critical of the Eastbourne family as we learn why throughout the story. Will all these secrets prevent them from saving themselves and Charlie?  Is love enough when trust is lacking? Will the powers of the faerie realm destroy them all?

Ms. Platt writes a tight read–pacing, action and dire circumstances with very few clues about how this story will resolve itself—keep you reading and questioning a world both beautiful and cruel.  The ARC of the read brings Julia, Douglas, Charlie and the faerie king in a showdown you won’t want to miss!

If you like your romances with an HEA, this one has it, however, enough threads are dangling, you won’t be satisfied until you read the rest of the series. I know I won’t!

I am a lover of books, both reading and writing. 2018 marks the beginning of my own journey from writer to published author. This blog will showcase various authors' thoughts on the elements of novel crafting, and my attempts to find my voice in writing. While journaling this journey, I hope to encourage others to follow their dreams. Book reviews continue as I have the last four years, only making time for my new pursuits.
View all posts by eileendandashi →
This entry was posted in Fantasy, Fantasy Romance, New Book Release, Paranormal Romance, Regency Romance, Romance and tagged Dark Gardens Series, Fantasy, Garden of Shadows, Historical Romance Regency, Meara Platt. Bookmark the permalink.