Wonderful tale by Amy Jarecki, perfect for the holiday season and book 3 of a perfectly delightful series: THE TIME TRAVELER’S CHRISTMAS

Posted on December 6, 2016 by eileendandashi 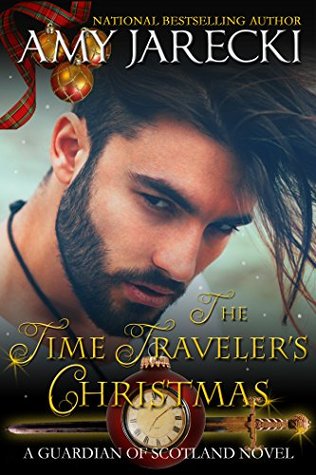 Guardian of Scotland Series:
Rise of the Legend
In the Kingdom’s Name
The Time Traveler’s Christmas

man’s life can fall apart in an instant…

Tougher than oxhide, Lachlan Wallace can take about anything except a breakup call from his wife two minutes before competing in the Karate Championship of the World.Arriving home with a loss, he agrees to watch his uncle’s cat over the holidays. Or so he thinks–until he awakes on a fourteenth century battlefield beside a woman fighting for her life.

Taken from her at the age of two, Lady Christina de Moray hasn’t seen her son in thirteen years. While traveling with Robert the Bruce’s army to exchange an English prisoner for the lad, a battle erupts. Losing the fight, Christina is rescued by a mysterious warrior while the English escape with her son yet again.

And never bet against the potency of passion…

Left with no way back to the twenty-first century, Lachlan agrees to help Christina rescue the lad from his English captors. If the heir is not returned by Christmas next, the Bruce will make his decision whom to grant the de Moray lands, including Lady Christina’s hand. Once his duty is fulfilled, Lachlan hopes to discover a way home–as long as he keeps his mind on the goal and ignores his growing love for the spirited woman who gives him her trust–and her heart

My Thoughts:  I can never get away from one of Amy Jarecki’s stories without ending up crying buckets.  She knows how to tell a story, making all impossible so very possible, you can’t not be but pulled into one of her stories without truly leaving something with you.

If you are able to read the first two books of this series, it will make this one centered around Christmas time even more stunning. So, for those of you are interested in a great Christmas read, make sure to partake of this one.

This heart-string pulling, sometimes humorous tale is fast-paced with main characters who have pasts that have devastated them. Lachlan Wallace is such a strong centerpiece to this story – his talents are many, but he comes to the 14th century not believing in himself because his wife announces she’s divorcing him and takes a few stabs at his manhood.  One thing you must keep in mind, Lachlan is not only a modern man, but his father is from the 14th century.  It sounds crazy, but believe me, the author will have you flipping those pages so fast, nothing is more important than knowing how it all turns out.

Christine has spent some 13 years being held by the English and just recently as been released.  Her son was taken from her when he was two.  Again, the English are the culprits.

Andrew, Christine’s son is a mess.  Lachlan is able to kidnap him from the English, but received a nice cut on the chest from Andrew.  The boy wanted to stay in England.  He is promised to be a knight. He no longer sounds Scottish, or thinks of himself a Scot.  Brainwashed by the English, he doesn’t accept his mother—it’s breaking her heart.  But Lachlan knows a lot about kids and his studies prove invaluable when dealing with Andrew on many levels.

I enjoy the notes the author leaves us.  She sticks very close to historical events, breathing living color into the relic pages of history.  Thank you, Amy Jarecki, for letting me tag along to Scotland with you at Christmas, in this memorable tale. A Merry Christmas to you, too!

I am a lover of books, both reading and writing. 2018 marks the beginning of my own journey from writer to published author. This blog will showcase various authors' thoughts on the elements of novel crafting, and my attempts to find my voice in writing. While journaling this journey, I hope to encourage others to follow their dreams. Book reviews continue as I have the last four years, only making time for my new pursuits.
View all posts by eileendandashi →
This entry was posted in Highland Romance, Highland Stories, Historical Romance, Paranormal, Time Travel and tagged A Guardian of Scotland Novel, Amy Jarecki, The Time Traveler's Christmas, Time Travel. Bookmark the permalink.

4 Responses to Wonderful tale by Amy Jarecki, perfect for the holiday season and book 3 of a perfectly delightful series: THE TIME TRAVELER’S CHRISTMAS