Experience the American Revolution under the historical pen of Jerri Hines in her saga series of WINDS OF CHANGE ~ this one is riveting!

Posted on November 8, 2016 by eileendandashi 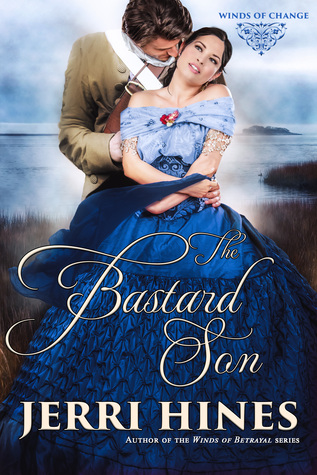 About the Story: Sumner Meador walked in a world of wealth and privilege as part of Charles Town’s elite, but that was years ago. Now he fights in the Southern backwoods driven by the passion he holds for the Patriot cause, shadowed by his past. Reeling from a devastating defeat at the hands of the British, Sumner seeks haven at his farm, only to find an interloper–an unwelcome and unwanted distraction. He has no time for the young woman or the complications she brings with her, but soon discovers he has no option but to give aid to the stubborn, courageous beauty whether she wants it or not.

Jane Kilmer has been violently thrust into the midst of the civil war ensuing in the backwoods. Hiding from one of the most dangerous vigilantes, Jane trusts no one. Suddenly, she has no choice but to put her life in Sumner’s hands. Both desire revenge, but neither wants what happens–to fall completely, undeniably in love with each other. As the war rages around them, their love is put to the ultimate test. The question becomes not whether their love will survive, but will they.

My Thoughts:  Ms. Hines’s books have such a rich, vibrant epic feel to them.  She immerses me in history, which pulsates with life under her pen. Her story is deeply layered, where secondary characters play a well-scripted and bold part in the texture of the story. In short, her writing is not to be missed and if you are an American history buff, you will appreciate her stories even more.

Sumner Meador, the hero, is a man of deeds.  He feels a man should be judged by his deeds and measures his worth by this. His sentiments are with the American Whigs who wish to govern themselves and not continue as a colony of England. He seeks revenge for the killing of his family.  He also learns in its seeking, it can destroy a man.

I appreciate the way the author couches events.  She gives us a well-rounded understanding what is at stake during this time of revolution in the young life of The United States, mixing personal and political revenge—enfolding the reader in the turmoil and emotional upheaval of the times.

Jane Kilmer, also a victim of the times, finds her strength of honor in denying what the enemy would want of her.  She captures the love of more than one man, but her heart belongs to only one. There are some very poignant and potent scenes which surely gripped me as if I were there, sharing the experience. Totally riveting and very much worth the read.

Here is a conversation between maid and Jane showing us the utter helplessness and despair which engulfs Jane.

Molly admonished Jane to lie down. “You need to rest, Jane. The news won’t change with leaning against the window. We will know soon enough. All we can do is pray.”

“Pray?” Jane asked. Her eyes widened with the pain held within them. “To whom would you have me pray?”

“God.” Molly walked over and rounded Jane’s shoulder with her arm. “It isn’t for us to understand, but to live our journey. Life is full of hurts, Jane. It is only for us to live.”

About the Author: Jerri Hines is an Amazon bestselling author of the Winds of the Betrayal series and Southern Legacy serial that were inspired by her fascination with history. She is a Southern gal who has lived the last thirty years near Boston with her Yankee husband. She believes in love and the power it holds. It is the reason she writes romances. Her next release under Jerri Hines will be the much anticipated conclusion to Winds of Betrayal, Set Fire To the Rain, coming in 2016.

She is also an Amazon Bestselling author under her penname, Colleen Connally. Her historical romance series, Secret Lives, is riddled with romantic suspense and a touch of paranormal. Fragmented, Book One Boston’s Crimes of Passion, marks her first contemporary suspense thriller. Framed, Book Two, will be released in 2016.

She is a supporter of The Home For Little Wanderers in Boston and the Alzheimer’s Association.

The Darkness of Deception

The Heavens Shall Fall
Set Fire To the Rain– Coming Soon!

Winds of Change Series: formerly Tides of Charleston Series
The Governor’s Daughter
The Bastard Son *
*The Bastard Son is also tied to Winds of Betrayal Series

I am a lover of books, both reading and writing. 2018 marks the beginning of my own journey from writer to published author. This blog will showcase various authors' thoughts on the elements of novel crafting, and my attempts to find my voice in writing. While journaling this journey, I hope to encourage others to follow their dreams. Book reviews continue as I have the last four years, only making time for my new pursuits.
View all posts by eileendandashi →
This entry was posted in Book Reviews, Historical Fiction, Historical Romance, New Book Release, Romance, Romantic Suspense and tagged Book Review, historical romance, Jerri Hines, The Bastard Son, Winds of Change Series. Bookmark the permalink.