Five Excellent Authors Share Stories of Castles, Ghosts and Love ~ all in a historical setting

Posted on November 7, 2016 by eileendandashi 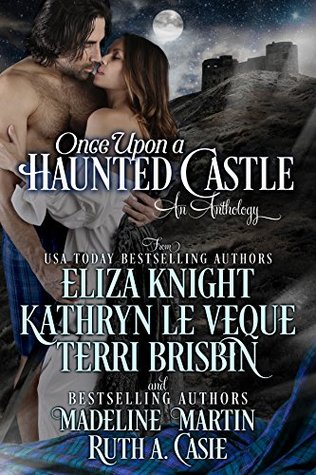 In Eliza Knight’s LAIRD OF SHADOWS, a decade old vow and an attack of Vikings brings Lady Elle Cam’béal to Dunstaffnage Castle seeking the help of the new, handsome, provocative laird with a beastly temper—Beiste MacDougall. As battles and treachery rain down upon them, Beiste and Elle find an unlikely ally in a ghost, and discover that a few stolen moments of passion can bring light from the shadows…

In Kathryn Le Veque’s DEEP INTO DARKNESS, Findlater Castle in the Scottish Highlands becomes a place of mystery and doom for Jamison Munro and his wife, Havilland. Traveling across the highlands one dark and stormy night, they stumble upon a lonely Host in Findlater Castle, a pathetic soul waiting for his wife to return to him. It is a terrible tale of a tragic love story that the Host tells the travelers but when Havilland becomes curious about mysterious tapping sounds that go on in the middle of the night, she soon realizes the danger that she and her husband are in. It becomes a race against time for Havilland to free a trapped spirit and save both their lives in the process.

In Terri Brisbin’s UPON A MISTY SKYE, Alexander MacDonald and Isabel MacLeod were not supposed to meet or fall in love or marry. Now that they have, both of their parents plan to separate them, by any means possible. But the ghost of Duntulm Castle has other plans for the forbidden lovers and those who stand in the way of true love.

In Madeline Martin’s A GHOSTLY TALE OF FORBIDDEN LOVE, Gavin MacDuff is a laird with a cruel and bitter aunt he’s sworn to protect. Senara is the new lady’s maid at Castle of Park and has sacrificed everything for the betterment of her family. Their paths tangle and lead to a road of hidden longing and secret passion – all of which is threatened by the power of one ghost who is fixed on revenge.

In Ruth A. Casie’s THE MAXWELL GHOST, traitors, deception, murders and ghosts run rampant at Caerlaverock Castle. Jamie Collins, a man of reality not magic, serves Lord Herbert in exchange for a his own farm. Laura Reynolds, the Herbert’s distant cousin comes to the castle to solve the murders and put the ghost to rest. The two, long-time friends find their destinies intertwined with hidden passions, but all is in jeopardy when Laura becomes the murderer’s next target. Jamie will find he needs some ghostly assistance to save Laura and declare his love.

My Thoughts:  I like the fact these authors bundled together five novellas about ghosts.  It was a fun Halloween read.  However, I enjoy ghost stories anytime.  I had read two of the five authors previously and was impressed by their stories, so when I got to sample three other authors’ works, it was only icing on the cake.  All the stories were fun, entertaining, some more suspenseful than others.  I read each and every one.  Thank you, authors, for such an awesome group of stories!

Elle, the heroine, in this story fights her destiny, fights the appearance of a ghost and her fate of helping the fairies.  She makes a decision to save her brother, Erik. She is also gifted something special from the fairies, a gift she has no choice to accept or reject.

A quote I lingered on from Laird of Shadows by Eliza Knight:

“Ye see, life is really only filled with the appearances of choice. The rest is simply our response.”

Deep Into Darkness by Kathryn Le Veque is the only of the five novellas which take us into present day, peering into the year 1290 A.D. It’s very unique because it follows in part the poem of The Raven by Edgar Allan Poe.  I’ve read many of Kathryn Le Veque’s stories and they are masterpieces, in my opinion.  She takes the hero and heroine of The Red Lion, a book recently released, weaves them into a very scary, page-turning story.

Heather works at a show called “World’s Best haunts”.  She and another woman, Lynn, travel to sites where history speaks of haunts, hence, that’s why she’s in a village close to Findlater Castle, trying to discover something about the castle.  We are then moved to the past where Lady Havilland and Jamison Munro take refuge from a heavy deluge of rain, cold, miserable and hungry at Findlater Castle.  They find much more than shelter.  They find danger as they’ve never experienced before.  Unfortunately, Jamie is terribly ill, leaving Lady Hallivand to take things into her own hands, but can she keep herself and her husband safe?

Upon a Misty Skye: by Terri Brisbin: Captures the cruelty of greed where a father, Ranald MacLeod, tortures his own daughter so she should do his bidding, marry a man to fill Ranald’s coffers. She escapes his malvolent character, through Alex’s swift intervention.  They had secretly married weeks before. They hide within the ruins of Duntulm Castle, only to confront another anguished soul whose offers protection.  Through Isabel’s journey, she discoveres the love of her mother and those who would have her safe.

In A Ghostly Tale of Forbidden Love by Madeline Martin,  Senara is a strong, formidable woman, ready to take care of herself. A woman of fire and a heart full of bruises and yet her innocent and pure heart is apparent to Gavin, who happens upon her protecting herself against four villains trying to take her horse, Norbert. She is out to find her fortune so she can help her family who have been stripped of most of what they own. Gavin is fascinated and intrigued with her thinking and finds she completes what he wants from life.

Sweet words from Senara, speaking her mind to Gavin,

“Love is too special to be bought no matter how much wealth ye have” she shrugged her slender shoulders again. “Besides, it doesna matter.”

Her grin turned playful. “Because I’ve no’ anything to my name but Norbert and a sword. They’re worth the weight of my heart, but I know my fortune. No man will marry me for anything but love.”

Words from Jamie, pride shining in his words as he gazes at his home, Caerlaverock Castle from The Maxwell Ghost by Ruth A. Casie.

“It pulls at my heart with its beauty and purpose. I represents all I hold dear in a person, it that’s possible, heart, soul and strength.

Here the heroine rushes into battle, so to speak, to save a man’s soul, someone who had died in Caerlaerock and is haunting the place.  Laura has a way with ghosts as her mother.  Jamie Maxwell is attracted to Laura, who in secret is attracted to him.  She takes him as a good friend, since he is known for his dalliances, but the attraction from both sides cannot be denied.  They work together to free this ghost’s spirit.  Time is of the essence, three weeks has past since the demise of Evan and the ghost haunting has begun.  They had only one week to free him or he would continue as a ghost.

A fun read with quite a bit of suspense!

I am a lover of books, both reading and writing. 2018 marks the beginning of my own journey from writer to published author. This blog will showcase various authors' thoughts on the elements of novel crafting, and my attempts to find my voice in writing. While journaling this journey, I hope to encourage others to follow their dreams. Book reviews continue as I have the last four years, only making time for my new pursuits.
View all posts by eileendandashi →
This entry was posted in Book Reviews, Highland Romance, Highland Stories, Historical Romance, New Book Release, Romance, Romantic Suspense, Supernatural Suspense and tagged Book Review, Eliza Knight, ghosts, historical romance, Kathryn Le Veque, Madeline martin, Novellas, Ruth A. Casie, Terri Brisbin. Bookmark the permalink.