Audiobook Review: ICE WOLF ~a chilling story to rival any haunted house this Halloween. Beware of a bump in the night, my reader… It may not be just a bump.

Posted on October 30, 2016 by eileendandashi

A little scary listening for you?  A very enjoyable thriller about a psychologist who’s being stalked!  Happy Halloween! 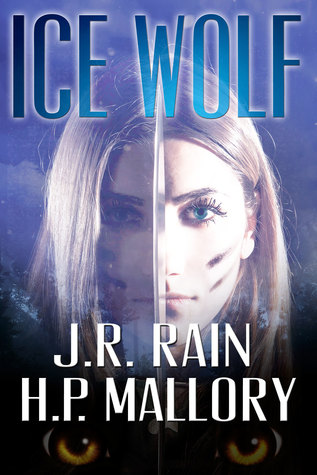 Ellie Matthews is the new police chief in Hope, Alaska. An experienced homicide detective, she’s running from a past that haunts her. One bullet changed her entire life and set her on a career path that collides with native lore, shape-shifter legends… and wolves.

In ICE WOLF, a hunter stumbles upon a naked body. When Ellie and her deputy retrieve the frozen corpse, he’s got a silver dagger in his chest but no ID. It’s Ellie’s first homicide case in Hope and she aims to solve it. But even stranger things happen and this murder investigation will be anything but routine. Ellie doesn’t want to believe the forensic evidence, but there’s something creepy about the John Doe victim. There’s no way that she’d walk away from this case, but maybe she should run.

The prime suspect is Alex Johnson, a bounty hunter who knows a lot more about shifters than he’s telling. But is he crying wolf? Things could get downright steamy with Ellie’s number-one suspect, who may be her only ally in town. But can this beauty trust a beastly hunk who’s under arrest?

It will take all of Ellie’s homicide investigation experience to track down the killer before the killer finds her first.

“ICE WOLF is funny, thrilling and sexy! It’s a page-turner with spine-tingling suspense, a hot romance and a compelling paranormal mystery. I fell in love with the Alaska setting and the engaging characters. It’s like Joe Leaphorn meets ‘Eureka.’ Loved it. More werewolves, please!” —Eve Paludan, Author of Vampire for Hire: Wolf Moon

My Thoughts: I haven’t read any work from either of these authors, but they certainly put together one nail-biting story.  Narrator Valerie Gilbert, of whom I’ve listened to many of her works, does a fine job with the telling of it. She narrates an assortment of genre.  Check out her list below.

The story is told in first person, in the voice of the new chief of police, Ella Matthews. From the beginning sentences, a body is found, stabbed in the chest, already providing a gripping scene.  Oh, did I mention it is naked? Yep, naked with boots on.

Ella wants to succeed in her new position.  She’s a bit like a fish out of water. She knows nothing about these whereabouts and people aren’t real open.  She’s also worked as a psychologist on the criminal scene, keeping lunies where they belong–behind bars.   She’s smart and feels she can take care of herself.  That is, until…

Alex Johnson, a man from the local Indian tribe, happens to be around when Ella decides to go for a walk to think things out – weird stuff that just can’t be happening.  Is she losing her marbles?  Maybe not, but this walk just about had her lose her life.  Luckily for her, Alex just happens to be there.

Ella questions everything.  Yep, she’s chief of police and things don’t add up.  Heck, Alex, even though he happened to have been there for her, he could have murdered the naked victim found in the snow. She couldn’t seem to control her attraction to him either. Dang! So, distance was the key, but she needed to find out more about the man. She had to man-up and lose those hormonal inclinations.

Ella’s investigation leads to more danger, and apparently, more criminals afoot, who have the same common denominator – getting what they want, or should I say who they want?

If you enjoy scary, werewolves, delusions of lunatics, and narrated in a beguiling way, don’t miss this listen. I enjoyed it very much–it made my night!

About the Author, H.P. Mallory: (courtesy of Goodreads)

I started my writing career as a self-published author and was lucky enough to hit both the Amazon and the Barnes and Noble bestseller’s lists with my two series, the Jolie Wilkins series and the Dulcie O’Neil series. Most recently I hit the New York Times and the USA Today lists with books in the Jolie series.

I signed with Random House (Bantam imprint) to write three books in the Jolie Wilkins series (Witchful Thinking, The Witch is Back and Something Witchy This Way Comes). Now I love the fact that I’m both a traditionally published author as well as a self-published one (with my Dulcie O’Neil series).

I’m a huge fan of anything paranormal and I always have been. I get super excited whenever they have those Twilight Zone Marathon days and anything ghost or vampire related will always attract my attention.

My interests are varied but aside from writing, I’m most excited about traveling. I’m extremely fortunate to have been able to live in England and Scotland, both places really having a profound effect on my books.

Thanks for checking out my books and I hope you enjoy them! Happy Haunting!
H.P.

About the Author, J.R. Rain: (courtesy of Goodreads)

I’m an ex-private investigator now writing full-time in the Pacific Northwest, where I live in a small house on a small island with my small dog, Sadie, who has more energy than Robin Williams.

As a kid I was always making stuff: skates, skateboards, skimboards, skis, sleds, clothing, furniture, wood carvings, Easter baskets, comic books, you name it. I was the mother of all nerds. Anyway, I think I was searching for the one thing I wanted to keep on making for the rest of my life. Then one day I discovered Choose Your Own Adventure books. Remember those? You as the reader were asked to make choices for the characters. Choose Your Own Adventures were a lot of fun and I just had to make my own. And so I did, writing three of them, and I’ve been hooked on writing ever since. (Just think, I could have been hooked on making Easter baskets.)

In high school, I was a fine balance of jock and nerd. I played football and baseball and somehow managed to write five complete novels. So how was I able to write so much and play sports and study at the same time? Easy. No girlfriend. In fact, I didn’t kiss a girl until I was in college!

In college, I still managed to write two books and over 80 short stories. (Even with all the kissing.) Eventually, I graduated with a perfectly useless degree in anthropology, got married two weeks later, and shortly thereafter started my career as an insurance claims investigator. I’ve made better choices.

I would spend the next four years researching and writing my first adventure novel, THE LOST ARK. At the age of 28, I landed one of the biggest agents in Hollywood.

Welcome to Hollyweird. I discovered that I had a natural knack for writing screenplays. (Go figure.) For the next two years I worked exclusively with Paramount Pictures and Alphaville Productions developing various movie and TV projects. Some things worked out; most didn’t. I learned much and I’m thankful for the experience.

Ultimately, I realized I had strayed far from my true love: writing novels (but never very far from my other true love: donuts). And so, with a little bit of money in the bank and some time on my hands (okay, fine, I got fired from my insurance job), I moved to Carlsbad and wrote three books: DARK HORSE, MOON DANCE, and CURSED.

Not to worry. I eventually met another girl (poor thing), and together we moved up to Seattle. Things turned ugly fast. I lost my job, my car, my money, the girl, went bankrupt, and yet somehow wrote THE MUMMY CASE in a freezing cold basement in the middle of a rainy winter, unemployed and stealing food (usually donuts) from local grocery stores.

Like the prodigal son, I eventually moved back home to southern California, where I got a new job, got my private investigator’s license, got a new movie agent, moved to Hollywood and was fortunate enough to have my first novel published in November 2005 by Mundania Press.

In 2006, I wrote ELVIS HAS NOT LEFT THE BUILDING, and in 2007, I moved up to Oregon where I eventually became a vegetarian (for moral reasons), and wrote the first draft of my ghost story, THE BODY DEPARTED. In 2008, I moved back to southern California to help with my sick father.

Now in 2009, you guessed it, I’m back up in the Pacific Northwest, living on a small island in a small home with my small doggie. It’s a simple, peaceful life…a life filled with writing, hiking, and Beggin’ Strips.

About the Narrator: Valerie Gilbert is a native New Yorker raised a Theosophist. Her dramatic flair has encompassed singing, tap dancing, competing in storytelling gigs, and writing and performing her own solo shows.  This led to the publication of RAVING VIOLET, the first of her three books, with a fourth, BRILLIANCE BREWING, releasing in 2017.  Valerie is an audio book narrator for her own three titles, and for many other authors.

Glorious Spitfire: A Symbol of Hope in the Dark Days of Conflict by Les Perera
Conspiracy Fact: Human Experimentation in the United States Declassified, Book 1 by Kate Marcello
Conspiracy Fact: MKULTRA and Mind Control in the United States Book 2 by Kate MarcelloIt’s Not Your Fault: True Stories of Abused Women by William H. Joiner Jr.
Year of Yes:  by Shonda Rhimes (A Summary version by Bern Bolo)
Clinton’s Comeback: Hillary Clinton by Bern Bolo
Loneliness: 30 Ways to Cope with Loneliness by Rita Chester
Vegan: The Vegan’s Guide to Thriving and Surviving by Mary Thibodeau
Vegan: Healthy Dump Dinner Recipes on a Budget by Charlotte Moyer
Why He Never Called Back: How Women Can Easily Attract Compatible Men by Chase Gill
Paris: Freebies and Discounts Travel Guide by Sarah Retter
Icons of Fashion by Hilary Brown
So, You Want to Work in Medical Records? By Jane B. Night
6 Questions About Medical Records Answered by Jane B. Night

Daughters of the Dragon: A Comfort Woman’s Story by William Andrews
Journey of Hope: A Novel of Triumph and Heartbreak on the Oregon Trail in 1852 by Victoria Murata

Shades of Gray by Carol A. Spradling
Brazos Bride (Men of Stone Mountain) by Caroline Clemmons

The Cottage at Bantry Bay by Hilda Van Stockum (1938, Ireland)

I am a lover of books, both reading and writing. 2018 marks the beginning of my own journey from writer to published author. This blog will showcase various authors' thoughts on the elements of novel crafting, and my attempts to find my voice in writing. While journaling this journey, I hope to encourage others to follow their dreams. Book reviews continue as I have the last four years, only making time for my new pursuits.
View all posts by eileendandashi →
This entry was posted in Audiobook, Audiobook Review, Book Reviews, New Book Release, Paranormal, Paranormal Romance, Romantic Suspense, Supernatural Suspense, Suspense, Thriller and tagged Audiobook Review, H. P. Mallory, Ice Wolf, J. R. Rain, Paranormal, Suspense, Thriller, Valerie Gilbert. Bookmark the permalink.

1 Response to Audiobook Review: ICE WOLF ~a chilling story to rival any haunted house this Halloween. Beware of a bump in the night, my reader… It may not be just a bump.