Posted on October 4, 2016 by eileendandashi 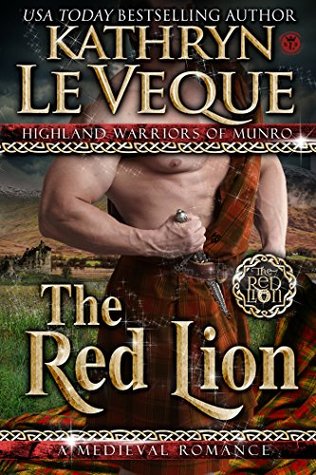 About the Story: 1288 A.D. – Sir Jamison Munro is a Highland warrior known as The Red Lion.

Big and burly, with a crown of vibrant red hair, as the son of the chief of Clan Munro, Jamison’s path in life was more unconventional than those of his clansmen. Fostering in England and France, Jamison learned the ways of his adversaries before returning home to take his place at his father’s side. But his father is a progressive thinker, knowing that in order to survive, his clan must become allies with the English. He knows that isolation will only bring destruction to his clan. Willem Munro has traveled the world, much like his son, and has made friends along the way. When his English friends to the south call upon him to help in their battle with the Welsh, Willem sends his only son.

Now, Jamison finds himself living with the English again as they do battle against the Welsh. Although highly trained in English tactics, and having many English friends, he cannot give himself over 100% to their ways. He sympathizes with the Welsh even as he plans battles against them. Outwardly supporting the English, he is nonetheless torn.

When the call goes out to defend Four Crosses Castle against a Welsh attack, Jamison rides to the siege and finds himself caught up in a nasty battle. With the gatehouse breached, he charges in to defend the occupants only to be attacked by one occupant in particular. What he first believes to be a small and slender knight, he soon finds out differently. He is met with ferocity by a skilled lady warrior.

Lady Havilland de Llion is the daughter of the lord of Four Crosses Castle. Part-Welsh, her family is nonetheless loyal to the English. When she sees the big Scotsman, she assumes he is siding with the Welsh and goes after him with a vengeance. Even upon discovering his loyalties, she doesn’t believe him and their fight goes on long after the battle itself is finished. By the end of their fight, she is exhausted. By the end of their fight, Jamison is in love.

Politics, battles, loyalties, and roaring passions play out in a story of high emotion and high adventure. To the big Scots knight known as The Red Lion, nearly everything in his life has come at a price, but in the battle for Havilland’s affections, there is no price too high that he will not pay.

My Thoughts:  Any one of Kathryn Le Veque’s stories is like a six-course dinner.  It begins with an appetizer taking you into a scene where mischief is played out.  As the courses follow, the story gathers momentum, depth, and texture, along with the usual build of tension thrusting us to the main course.  By the time I finish one of her stories I am replete, satisfied beyond expectations.  She draws me into her web, captivating every one of my senses.  I adore her writing, whether medieval, highland or contemporary reads.  She, by her plots, many-layered subplots and her vibrant, bold characters creates a story I am absolutely unable to put down. Every. Single. Time.

Jamison Munro is part of The Lions of the Highland.  He, along with Beaux, Kendrick and Caspian are sons of clan chiefs and each will have their own story in this new series.

Jamison is sent back to England, where he fostered by his father, for protection against the MacKenzies, who are out to get rid of him.  He is back with the de Lohr men.  If you’ve read any of this author’s work, you will be familiar with this lot.  They are a rare breed among men. While there he is caught up with the Welsh who, like most Scottish, do not tolerate them on land they consider theirs.

The de Llion sisters, half English, half Welsh have my admiration.  They were dealt a hard hand.  Their father had been mentally ill for some time.  They simply hid this fact. All three sisters, Havilland, Madeline, and Amaline, are warriors, made so by their father.  He had no sons, so his daughters were his sons. His decision shaped the lives of his daughters until they knew nothing else except battles and protecting Four Crosses Castle against their enemies – the Welsh.  The castle and its occupants had all sided with the English.

Havilland is the stronger of the lot, Madeline, fiercely protective of her sister, however, Madeline has her own secrets and wishes for the keep, only complicating Havilland’s need to safeguard her family’s home. Amaline, age 15, is very sensitive to both her sisters’ wishes, although she knows Madeline has a nasty streak in her, as you will discover in the story.

Jamison is a man of strength, both physical and morally.   When he meets the de Llion sisters, he is captivated by Havilland.  Here is a woman he could respect, and yes, could love, if only she wouldn’t send a dagger his way first!

I more than recommend this new series for readers who haven’t had enough of the highlands, love the excitement of a good battle, both in love and war, and who like their reads demanding their attention   in all directions.  Nothing is ever easy in the land of Kathryn Le Veque.

“Kathryn Le Veque is a force of nature. Her stories are epic, with timeless themes and heroes to die for.” –Tanya Anne Crosby, New York Times Bestselling Author

“The epic Medieval Romance is back – thanks to Kathryn Le Veque!” — Claire Delacroix, NYT Bestselling author

KATHRYN LE VEQUE is a USA TODAY Bestselling author, an Amazon All-Star author, and a #1 bestselling, award-winning, multi-published author in Medieval Historical Romance and Historical Fiction. She has been featured in the NEW YORK TIMES and on USA TODAY’s HEA blog. In March 2015, Kathryn was the featured cover story for the March issue of InD’Tale Magazine, the premier Indie author magazine. She is also quintuple nominee (a record!) for the prestigious RONE awards for 2016.

Kathryn’s Medieval Romance novels have been called ‘detailed’, ‘highly romantic’, and ‘character-rich’. She crafts great adventures of love, battles, passion, and romance in the High Middle Ages. More than that, she writes for both women AND men – an unusual crossover for a romance author – and Kathryn has many male readers who enjoy her stories because of the male perspective, the action, and the adventure.

Kathryn loves to hear from her readers. Please find Kathryn on Facebook at Kathryn Le Veque, Author, or join her on Twitter @kathrynleveque, and don’t forget to visit her website at www.kathrynleveque.com.

I am a lover of books, both reading and writing. 2018 marks the beginning of my own journey from writer to published author. This blog will showcase various authors' thoughts on the elements of novel crafting, and my attempts to find my voice in writing. While journaling this journey, I hope to encourage others to follow their dreams. Book reviews continue as I have the last four years, only making time for my new pursuits.
View all posts by eileendandashi →
This entry was posted in Book Reviews, Highland Romance, Highland Stories, Historical Romance, Romance, Romantic Suspense and tagged Book Review, Highland Romance, Highland Warriors of Munro, Kathryn Le Veque, The Red Lion. Bookmark the permalink.