Book Review: THE REGARDS OF A ROGUE by Eleanor Meyers

Posted on September 30, 2016 by eileendandashi 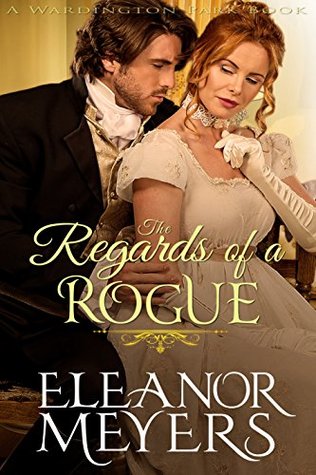 Dark inclinations surround a duke, a viscount, and a deadly knight. But, what will happen when their hearts are introduced to love?

My Thoughts:  Parts of this book I really like, others, not so much and the storyline was a bit confusing to me.  Although, in looking at previous reviews, someone mentioned that it is better to read TO LOVE A LORD OF LONDON, book 1 to get a better understanding.  Perhaps, that is the missing link for me.

This book is divided into three parts.  Parts two and three were my favorite .

Part one happened so fast, very little conflict, a happily ever after, it left me blinking. However, the story was sweet, engaging, and entirely likeable, just ended more abruptly than felt comfortable.

The Epilogue that follows really seemed to be a side conversation which didn’t feel it tied into the first story. That’s where I was confused.

Part two, about Hugh and Olive had more traction for me.  It held some suspense, and wit.  Olive, was a woman who blended into the decorations of a ball.

Amanda tapped her hands on the table, her eyes lighting with blue fire.  She was so passionate about everything. “Olive, you’re not dreadfully plain; you’re simply…unvarnished.”

Edith narrowed her eyes. “Unvarnished? Is she to be compared to wood?”

“No.” Amanda shook her head. “I’m simply saying that she is a lady pure of heart and without all the extra jewels and excessive garments that we other women need.” She smiled at Olive. “One day, you’ll find the right person, and he’ll fall madly in love with you.” She had the habit to speak in conviction and in a way that made one believe everything she said. Olive smiled, not being able to help it, but in the end, she knew the truth. Next year she wouldn’t even have the funds to enter another season. The season had been her w last which meant Olive would have to make other arrangements for herself.

Olive had the misfortune of being the daughter of a man who couldn’t keep away from the gaming table.  He’d even gamble with the stable help.  One evening, he gambled her away (she heard it happening).  She would have no part of it.  She ran!  Procuring a horse, she ran into the worst of luck.  The owner, Hugh Garret, the Viscount of Windorland was drunk, sleeping next to the steed she was stealing from the barn.  Needless to say, she was caught and the story takes off.  Hugh is a very interesting and likeable fellow, but has serious challenges in his life.  It appears Olive is just the remedy for his misery.

Part Three is about Max and Amanda who we already met earlier in the book.

Max is an exceptional man, lots of control, with merits and determination.  His past comes to haunt him.  Because of his honor and goodness of heart, he becomes the guardian of his wife’s daughter, not his own child.  Lots of character development in this section.  Characters are thoroughly likeable and I found myself cheering Hugh on.

Amanda wanted to be a lady of means.  She wanted to be known as Lady Amanda, which means she much marry a peer. When one snob of a peer approached her at a dance, she snubbed him.  She was overheard by Max, a man who wouldn’t be suitable for her at all, yet, she is curious.  She decides to take the job of governess, because she saw Lydia needed her.  It appears Max did, too.

There is a teaser at the end of the read.  Duke of Wardington has not been able to marry off his youngest son, Mark.  He has a wager of sorts with the Dowager Countess Abigail Cartridge.  He’d receive no kiss  from her until his last son was married.  He is having a devil of a time getting that to happen. So more is to come in this series which should be quite entertaining.

About the Author: (bio taken from Amazon.com) Eleanor Meyers is a hopeless romantic who believes that one should breathe and live on love. She is especially intrigued by the love tales of the Regency era due to the juxtaposition of tradition and love in a very stylistic fashion.

At a young age, she is inspired by the works of Jane Austen and Georgette Heyer. There is a strong romantic appeal about that era and it is Eleanor’s desire that readers will take time to come away with her through her writings and immerse oneself in that time when love was so pure and intense.

In Eleanor’s writings, there is a pragmatic display of human’s imperfections; hence characters who may be flawed in certain ways. In the midst of dealing with one’s imperfections, a couple found love, found hope in each other and in God.

Eleanor incorporated messages of redemption, forgiveness and sometimes inner deliverances from the bondages that so held a character for so long. It is her belief that no matter how seemingly hopeless one’s situation might be, there will always be hope. The key is to wait and to believe and to hold on.

So come away with her and be enthralled in the beautiful Regency era!

I am a lover of books, both reading and writing. 2018 marks the beginning of my own journey from writer to published author. This blog will showcase various authors' thoughts on the elements of novel crafting, and my attempts to find my voice in writing. While journaling this journey, I hope to encourage others to follow their dreams. Book reviews continue as I have the last four years, only making time for my new pursuits.
View all posts by eileendandashi →
This entry was posted in Clean Read, Historical Romance, New Adult, New Book Release, Uncategorized and tagged Book Review, Eleanor Meyers, historical romance, Regency Romance, Young Adult Read. Bookmark the permalink.