Posted on September 20, 2016 by eileendandashi 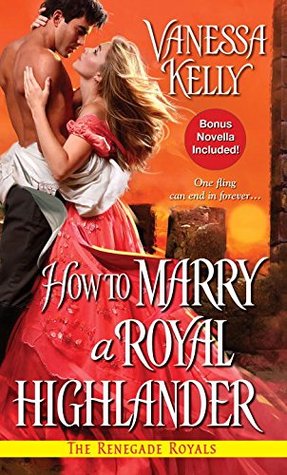 About the Story: Illegitimate yet thoroughly irresistible, the Renegade Royals are leaving behind their careers as daring spies for the greatest adventure of all…

At sixteen, Alasdair Gilbride, heir to a Scottish earldom, fled the Highlands and an arranged betrothal. Ten years later, Alasdair must travel home to face his responsibilities. It’s a task that would be much easier without the distracting presence of the most enticing woman he’s ever met… After one escapade too many, Eden Whitney has been snubbed by the ton. The solution: rusticating in the Scottish wilderness, miles from all temptation. Except, of course, for brawny, charming Alasdair. The man is so exasperating she’d likely kill him before they reach the border—if someone else weren’t trying to do just that. Now Eden and Alasdair are plunging into a scandalous affair with his life and her reputation at stake—and their hearts already irreparably lost…

My Thoughts:  Edie, Eden Whitney, is a lovable character, full of life, energy and intriguing as a personality.  Captain Alasdair Gilbride certainly things so. Edie is forever getting into trouble and gets caught in one too many escapades.  Now she’s boarded off to Scotland, along with her mother to let the ton forget, if they can, that is.  Captain Alasdair offers to have them stay at his castle.

Edie doesn’t know how she’ll be able to spend five long months in Scotland with her mother who is so tiresome and Captain Alasdair who simply drives her crazy.

The captain works through his plans for Edie.

Still, he’d need Edie’s help once they arrived at Blairgal Castle, which meant he had to get on her good side by then. Yes, he was a manipulative bastard and his plans for her were a tad ruthless, but he was convinced that Edie needed someone to take care of her. Every moment he spent in her company told him that he was exactly the right man for the job…

Once in Scotland, Edie finds Blairgal Castle fascinating, convinces herself she can win over Captain Alasdair’s father, his sister and Fergus, the captain’s cousin.  She has lots to learn about the highlands and the captain’s family.  She’ll find her mother, Lady Reese, is more than just an annoying, complaining travel partner. She’s exceedingly entertaining. She certainly knows how to control a situation.  Alasdiar’s aunt is one unbalanced woman I’d not want to cross.  I liked the part she played, however, adding just another layer to the complexity of highland families.

About the Author: Vanessa Kelly is an award-winning author who was named by Booklist, the review journal of the American Library Association, as one of the “New Stars of Historical Romance.” Her sensual, Regency-set historical romances have been nominated for awards in a number of contests, and her second book, Sex and The Single Earl, won the prestigious Maggie Medallion for Best Historical Romance.

Vanessa’s current series, The Renegade Royals, is a national bestseller. Now, in a delightfully witty new spin-off series, she introduces The Improper Princesses—three young women descended from royalty, each bound for her own thrilling adventure. MY FAIR PRINCESS, book 1, releases in August, 2016.

When she’s not dreaming up plots for her next Regency historical novel, Vanessa is writing USA Today Bestselling contemporary romance with her husband under the pen name of V.K. Sykes.

You can find Vanessa at http://www.vanessakellyauthor.com or at http://www.vksykes.com. For all of Vanessa’s latest news and contests, please sign up for her newsletter: http://bit.ly/1SrNioi

I am a lover of books, both reading and writing. 2018 marks the beginning of my own journey from writer to published author. This blog will showcase various authors' thoughts on the elements of novel crafting, and my attempts to find my voice in writing. While journaling this journey, I hope to encourage others to follow their dreams. Book reviews continue as I have the last four years, only making time for my new pursuits.
View all posts by eileendandashi →
This entry was posted in Book Reviews, Highland Romance, Highland Stories, Historical Romance, New Book Release, Romance and tagged Book Review, historical romance, How to Marry a Royal Highlander, Vanessa Kelly. Bookmark the permalink.