ًًWhile the title is EARL’S UNFORGETTABLE FLAME, I think it could also be said THE FLAME FINDS AN UNFORGETTABLE EARL! Really enjoyed this clean read…

Posted on September 2, 2016 by eileendandashi 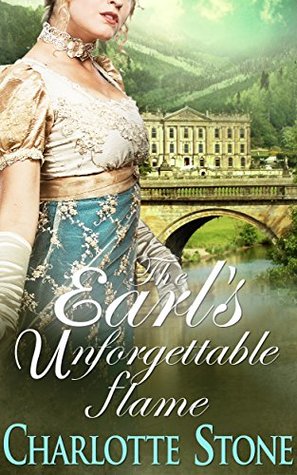 Catherine Watson. .
The night young Benjamin Frederickson met the victim of a house fire, he has remembered it all of his life… Her spirit has lingered in his memory for years. Even through his days of rebelling against his father, The Earl of Wembley, as he drinks, gambles, and womanizes.

But when he meets the beautiful Catherine Watson again, still scarred from that fire so many years later, he is enchanted. But can a woman so remarkable remember a boy she met briefly years ago?
.
Catherine, however, is less than impressed!
Considering herself disfigured and resigned to the idea that she will never marry, she sees his advances as a cruel joke at her expense.

How can any man view her with anything but disgust, especially the dashing future Earl of Wembley?

“I cannot believe that you genuinely want to spend time in the presence of this.” She pointed to her own scarred neck and her covered arm.

“Then your belief in me is sorely lacking,” he sulked angrily. “As is your opinion of your ownself.”

It won’t be easy for Lord Benjamin to convince Catherine of his love. Is he up to the task?

“I wish it were different. I wish you could court me as if I were normal.”
.
Will Catherine let the past dictate her future?
Will Benjamin give up and let her go?

This is a clean, historical regency romance
Just $0.99 for a very LIMITED TIME OFFER only.
Download for FREE with Kindle Unlimited

My Thoughts:  A read with well-rounded and deeply inspiring characters, flaws and all.  It’s a story where Benjamin and Catherine learn to face their deficiencies and still able to love who they are, just as they are.

Benjamin’s past has been less than exemplary – drink and women were his staple.  Catherine’s greatest flaw is not believing she is up to par—men would not be interested in a disfigured woman. Each of them do a lot of growing as they learn what is important in life and more importantly who is important.

As with all good reads, the story starts with a scene of action.  Catherine’s family is caught in a home fire and barely escape with their lives.   Catherine, age 10 at the time, narrowly escapes death.  When she awakens in her bed chamber, disoriented by smoke, her only thought is to save her younger sister who sleeps in the nursery.  In this selfless act, she shows her character, one which is reinforced through the story.

Note: Two loose ends which I didn’t get answers: 1) who started the fire, and 2) who saved Catherine.  Perhaps there is a mystery of sorts which will be answered later in the series.

Benjamin, son of Earl of Wembley, came with his father to the fire as aid to their neighbor.  He was only 13 years old; the event had a lasting impression on him.  As an adult, he remembers the young girl Catherine.  It was her bravery and courage in the face of pain and disfigurement, he held in his mind long after he left the scene of devastation.

It didn’t make any sense to him, how someone who had not been in the world long enough to do any damage to it, could be so damaged by that same world.

Catherine soon learned her life was to serve her father and younger daughter.  How could anyone love her when she was so deeply scarred on her neck and arm?

Many years past, Ben returns from university only to find he’s still intrigued with his neighbor.  He was enchanted with who she had become. Adversity can either make or break an individual and in this instance Catherine’s natural goodness and character blossomed.

It took a lot of effort to convince Catherine she is worthy.  Benjamin has a warm, loving spirit, but a man’s pride can take only so much. After losing his father whom he loved, he didn’t have the energy to continue the fight for Catherine.  Her insecurities barred his path, destroying his hope for a loving relationship.

A character I hope to hear more about is Benjamin’s sister, Lady Julia.  She’s a very strong woman who covers her broken heart very well and has gained much wisdom through her short life.  She also helps Benjamin find happiness in the thing that sisters very capably do.  What, you ask? Interference, of course!

Lady Julia, twin of Benjamin has an occasion to speak with Catherine.

“   This is the way I see it: That fire took something from you. It doesn’t matter to Ben, and it shouldn’t matter to anyone who cares for you. But it matters to you. Will you let that fire continue to eat away at your life, even now?”

This is a heart-warming, entertaining, sweet romance, where internal conflict and emotions run high. It is my first read from this author.  I look forward to continue the series.

About the Author: In a near cynical world which we are currently living in, Charlotte finds comfort in the readings of Regency Romance writings, one of her favourite would be Laura Kinsale’s Flowers from the storm where the female character loves and saves the male lead character who is a stroke victim. It was such writings which inspired her to be an author herself.

In Charlotte’s writings, the characters are able to see beyond the imperfections of each other and to accept and love one another, just the way one is. Isn’t this true of our inner self? To be able to find someone who is able to see the beauty in us, in spite of all imperfections we might have.

Isn’t this true of what love really should be? Ever accepting, ever loving, ever seeking. May you find love and acceptance in Charlotte’s writings.