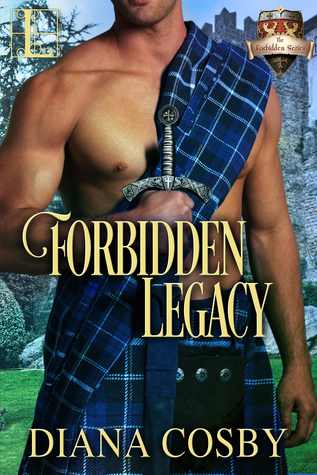 “Diana Cosby is superbly talented.”—Cathy Maxwell, New York Times bestselling author A betrothal neither wants . . . a passion neither can resist.

When the English murder Lady Katherine Calbraith’s family, she refuses their demands to wed an English noble to retain her home. Avalon Castle is her birthright, one she’s determined to keep.  After Katherine’s daring escape, she’s stunned when Scotland’s king agrees to allow her to return to Avalon, but under the protection of Sir Stephan MacQuistan . . . as the knight’s wife.  To reclaim her heritage, Katherine agrees. She accepts her married fate, certain that regardless of the caliber of the man, Stephan may earn her trust, but he’ll never win her love.

One of the Knights Templar, Stephan desires no bride, only vengeance for a family lost and a legacy stolen. A profound twist of fate tears apart the Brotherhood he loves, but offers him an opportunity to reclaim his legacy—Avalon Castle. Except to procure his childhood home along with a place to store Templar treasures, he must wed the unsuspecting daughter of the man who killed his family. To settle old scores, Stephan agrees, aware Katherine is merely a means to an end.

The passion that arises between them is as dangerous as it is unexpected. When mortal enemies find themselves locked in love’s embrace, Stephan and Katherine must reconsider their mission and everything they once thought to be true .

My Thoughts:  This is the beginning of a new series, her third, for author Diana Cosby.  Since I’ve read most of her books, I find her story lines always unique, and her stories are a real pleasure to experience.  It is my practice not to read the teaser of the next book in the series, usually following the story. However, in this case,  I could not stop myself! Her stories have engaging plots with awesome description.

Yes, dear reader, she’s a talented writer who writes in a genre I tend to read a lot.  She weaves history within the story in a non-contrived way, while her characters live in a believably thrilling world with complex and challenging obstacles to overcome.

I’ve read other books about the Knights Templar, their way of life, their vows and commitment to God.  However, this story starkly brought to life the desperate struggle for survival after King Philip betrayed them.  (Sigh) The greed of man has no bounds.

Sir Stephan MacQuiston is brought into the thick of it.  A dedicated Knight Templar since a young man, now lost his vocation. The General Master told the knights to disband.  But how can men change when they have devoted their existence to God and led a certain lifestyle?  Their Templar frame of mind continues even though they no longer officially exist..

I like how the author brings out the strength of this woman, whose parents she was forced to watch killed by the Earl of Preswick. She is placed in a dungeon because she refuses to marry the man. In addition, she has the wit and intelligence to escape the captivity, and has a compassionate nature which is most beneficial when dealing with her new husband.

Lady Katherine had a stubborn streak. She came to the king, her godfather, to help her regain her home, Avalon Castle. She would not let these Englishmen take her home. The king grants her wish to return to her home to regain it, on the condition she marries Sir Stephan.

Here is an excerpt where Lady Katherine questions why men become evil.

Why was there so much evil? How could people believe status or wealth would bring satisfaction? Dinna they realize that regardless of whether they achieved their goals, they couldna find warmth in a gold coin at night, nor would a castle or country conquered offer anything but duty.

Immersed in their need to keep their spoils from all who sought to claim their power or wealth, the vicious cycle would begin again. In the end, those who held riches earned naught but the burden of defenindg all they amassed.

Each hold a secret, but there are other secrets neither of them are aware.  Sir Stephan’s is he’s a Templar Knight, and Earl of Dunsmore by birth right. Lady Katherine’s father was the man who killed his father and mother and caused the death of his sister.

Lady Katherine’s is she cannot bear a man’s touch.  She was raped as a young girl and the act haunts her to this day.

Their greatest flaw?  Both are burdened with past events which dictate their present happiness.

Truly a lovely read with rich characters you learn to care about and cheer them on their journey as they find mutual admiration, friendship and selfless love.  Challenging bumps and surprising twists add further interest creating a thoroughly engaging read.  I highly recommend Diana Cosby’s novels.

About the Author: A retired Navy Chief, Diana Cosby is an international bestselling author of Scottish medieval romantic suspense.  Her award-winning books are available in five languages.  Diana has appeared at Lady Jane’s Salon, in NYC, and in Woman’s Day, on USA Today’s romance blog, “Happily Ever After,” MSN.com, and in Texoma Living Magazine.

After retiring as a Navy Chief, AGC(AW), Diana dove into her passion – writing romance novels. With 34 moves behind her, she was anxious to create characters who reflected the amazing cultures and people she’s met throughout the world.

Her years of living in Europe inspired Diana to write in the medieval time frame.  After watching the movie Braveheart and with her passion for writing complex plots, the idea for the MacGruder brothers series was born.

Diana has many passions in life, but one that resonates in her life is that of giving. She firmly believe that each of us can make a positive difference in another person’s life.  Some of the charities she supports are listed below:

The National Trust for Scotland, which acts as

Habitat For Humanity, which gives a deserving family more than a home, but a foundation upon which to build their dreams..

Semper Fi Fund , is a 501(c)(3) nonprofit to help with immediate financial support for injured and critically ill members of the U.S. Armed Forces and their families.

Homes For Our Troops, assists severely injured Servicemen and Servicewomen and their immediate families through various venues to aid them in building a home that allows them live a more independent life.

The Navy SEAL Foundation, provides immediate and ongoing support and assistance to the Naval Special Warfare community and their families.

I am a lover of books, both reading and writing. 2018 marks the beginning of my own journey from writer to published author. This blog will showcase various authors' thoughts on the elements of novel crafting, and my attempts to find my voice in writing. While journaling this journey, I hope to encourage others to follow their dreams. Book reviews continue as I have the last four years, only making time for my new pursuits.
View all posts by eileendandashi →
This entry was posted in Book Reviews, Highland Romance, Highland Stories, Historical Romance, Medieval Romance, New Book Release, Romance and tagged Book Review, Diana Cosby, Forbidden Legacy, Historical Medieval Romance, historical romance, The Forbidden Series. Bookmark the permalink.