Early Review: Mary Morgan’s DRAGON KNIGHT’S RING, last book of the series ~ it had me blubbering! 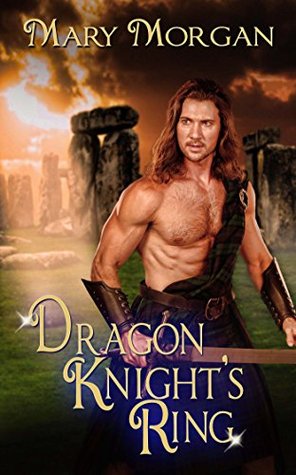 Order of the Dragon Knight’s Series — click to order from Amazon:

Publisher’s Summary:  Crusader, Adam MacFhearguis is on one last quest to the standing stones in Scotland where he seeks to bury the past. However, a silent prayer sends him to an unknown future and to his beloved Meggie. When he uncovers a shocking revelation, Adam questions everything about the woman he thought he knew and loved. He may have traveled the veil of ages, but time is now his enemy.

Margaret MacKay lives a life in the future without the memories of her past—her death. When Adam arrives at her door confessing he knows her, she is confused and wary. With each passing day, she yearns to learn more from this stranger. Yet, when a truth is revealed, can she trust the man to unlock the chains from her mind and heart?

Will love free the bonds to unite the two lovers who were doomed centuries ago? Or will evil finally claim victory over the Dragon Knights?

My Thoughts:  Adam MacFhearguis is a man torn.  Torn in so many ways. Founded in the magic of the highlands and the old ways, he finds a new religion, the one of the cross, the one God of love and forgiveness.  He needs a God who could forgive him for letting Meggie, his true love die. But the problem also lies in Adam for not forgiving himself. He is in despair, has been these three years. His soul reaches out to Meggie, even in death he seeks her.. Returning home from the Crusades, he goes to the standing stones and remembers all of that awful day and wishes for the impossible.

He knew it was a foolish request, since he no longer believed in them, but in his heart, Meggie did, so he said the words for her. “Can ye not bring her back, Fae? If only to see her face one more time, he uttered softly.

Bringing the ring to his lips, Adam placed a kiss on the red stone before tucking it away in this pouch, belted at his waist.

As the tortured knight knelt at the foot of the standing stones, Adam’s quiet, broken prayer whispered across the Highlands to another realm. And in that moment, when she heard his sorrowful plea, the Guardian granted him his request.

Throughout the series we have known Meggie is dead.  Her brothers, there are four (Angus, Duncan, Stephen and Alastair), all have grieved her passing and all went through great trials to be redeemed by the Fae.  They have learned to love.  Here too, the last Dragon Knight, Adam, is on his quest.  He must follow Meggie into the future, to help her recover her memories of her past, for she has none.  The Fae transported her into the future to save her life, favored by the Fae as her brothers were.  But now there are greater issues, realms of beings are at stake.  Will Adam make her remember in time? Meggie holds important information provided her by the Fae. She must remember.

Lachlan, the evil one, plots with The Dark One to take over the world.  Fenian Warriors, we’ve met in other stories of the series, have decided to join forces with the Dragon Knight’s, to destroy Lachlan and his plot. They are willing to forfeit their lives to save both the realm of the Fae and humans. Will they be powerful enough?

This series has been wonderful to read. I have lived the land of the Dragon Knights, known their courage, pain, and eventual victory. I knew this was the last of the series, so I felt much like I had to say good-bye to very good friends.  Instead of an author’s note at the end of the story, Adam MacFearguis leaves a note.  It puts a smile on my face knowing this isn’t the last I’ve seen of this wonderful set of characters.

Ms. Morgan’s stories torture the heart, gouge the soul, then uplift the spirit soothing and healing what she’s destroyed. But you say, it’s make believe!  It’s just a fantasy of the mind!  Dear reader, I was there, all was seen, and I’m a believer.

I absolutely recommend this writer’s work.  Her fascination with dragons, the realm of the Fae and her love of romance keeps me coming back for more, over and over.

I am a constant daydreamer and have been told quite often to remove my head from the clouds. Yet, this is where I find the magic to write my stories. Not only do I love to weave a good tale, but I have a voracious appetite for reading. I worked for Borders Books for almost fourteen years. Imagine my delight to be surrounded by so many books, talking to others about them, and getting paid.

I have traveled to England, Scotland, Ireland, and France. There are those who know me well when I say, “My heart is in the Highlands.” I believe I have left it there or maybe in Ireland.

When not writing, I enjoy playing in my garden–another place where magic grows. Of course, there is time spent with my family. They are the ones that keep me grounded.

I am a lover of books, both reading and writing. 2018 marks the beginning of my own journey from writer to published author. This blog will showcase various authors' thoughts on the elements of novel crafting, and my attempts to find my voice in writing. While journaling this journey, I hope to encourage others to follow their dreams. Book reviews continue as I have the last four years, only making time for my new pursuits.
View all posts by eileendandashi →
This entry was posted in Fantasy, Fantasy Romance, Highland Romance, Highland Stories, Historical Romance, New Book Release, Romance, Time Travel and tagged Dragon Knight's Ring, historical romance, Mary Morgan, Order of the Dragon Knights, Time Travel. Bookmark the permalink.

10 Responses to Early Review: Mary Morgan’s DRAGON KNIGHT’S RING, last book of the series ~ it had me blubbering!