Review: LOST IN HER by Sandra Owens ~ Heart-Pounding Romantic Suspense 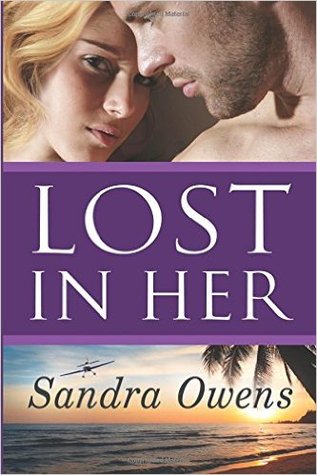 A K2 Team Novel Series:
Falling For Her
Crazy For Her
Someone For Her
Lost in Her
Only Her releases July 19, 2016
About the Story: It’s been a year since Ryan O’Connor buried his wife. He was in Afghanistan as a SEAL medic when the call came that she’d been killed during a robbery. In that time, he returned home, nursed his grief, and joined his former brothers-in-arms in the K2 Special Services.

After a bad breakup with her ex, Charlene “Charlie” Morgan finds happiness only when flying the friendly skies—as an aerobatic stunt pilot. But the skies aren’t so friendly when her plane troubles turn out to be the work of sabotage.

Looking to forget their worries, Charlie and Ryan run into each other at a bar. The chemistry is instant and intense. It’s only supposed to be a one-night stand. But the memory of their passionate kiss lingers, and when Ryan shows up at Charlie’s flight school, their romance takes off. Yet the route to love has its own turbulence—secrets, lies, and danger. Can one night lead to something lasting?

My Thoughts: From the outset of the story, Charlie showed she was a woman who knew her mind. She could do with a one-night stand, so made her way to a dance club packed with action…and men.  One guy lit up the room for her.  Ryan, an ex-SEAL, was looking for the same, so when Charlie ‘picked him up’, he liked the idea.  A kiss on the dance floor had Ryan back peddling and Charlie confused.  Wasn’t he looking for the same as her?  A night with no attachments?  Ryan couldn’t take the plunge – the kiss held more than just a night together—a certain spark that scared him–and memories that wouldn’t leave him.

Men were the least of Charlie’s problems.  Being a stunt pilot she had a show coming up and she had to be prepared, but ‘things’ were happening.  While up in the air, her engine conked out. This is where, as a reader, you feel your heart stop as well.  Charlie wasn’t a novice, she’d been trained well and with that and luck she made it back to the edge of the landing field.  This is one of many tense moments the author took me through.  Frightened, yes, but with the descriptive scenes she made me feel Charlie’s experience was mine.

While Charlie is trying to figure out who would try to sabotage her plane, Ryan is struggling with his love and resentment of his dead wife.  His relationship with Kathleen had been one of long duration and he thought she loved him as much as he her.  While he was on a long-term mission, she had died; the autopsy showed she was two months pregnant.  He couldn’t seem to let go of her–wasn’t he enough for her?  And he couldn’t seem to get Charlie out of his mind either, even when he was the one who walked away.  Then, he saw her on the evening news about a near crash of her plane and fortunate safe landing.

Ryan was drawn to Charlie.  Perhaps it was because they both lived on the edge and enjoyed the gush of adrenalin with danger. Perhaps we are all given new beginnings if we are brave enough to take the chance.

I loved how the author left me, quite literally, hanging in the air on several occasions!  Where Charlie seemed to know how to handle each emergency, I was having the meltdown!  Moving from scene to scene, from hero to heroine, Ms. Owens coiled my guts tighter and tighter. Who was out to do her in? Would they succeed?

All-in-all, the story was delightfully engaging. Ryan was one of those guys you wish would look at you. Not only a looker, but a guy with guts, fearless, and quite the lover. Charlie is strong, but not so strong she doesn’t let her heart lead her senses when it comes to Ryan.

Five thumbs up for the series and this exciting read.

About the Author: A best selling, award winning author, Sandra Owens lives in the beautiful Blue Ridge Mountains of North Carolina. Her family and friends often question her sanity, but have ceased being surprised by what she might get up to next. She’s jumped out of a plane, flown in an aerobatic plane while the pilot performed death-defying stunts, has flown Air Combat (two fighter planes dogfighting, pretending to shoot at each other with laser guns), and rode a Harley motorcycle for years. She regrets nothing.

I am a lover of books, both reading and writing. 2018 marks the beginning of my own journey from writer to published author. This blog will showcase various authors' thoughts on the elements of novel crafting, and my attempts to find my voice in writing. While journaling this journey, I hope to encourage others to follow their dreams. Book reviews continue as I have the last four years, only making time for my new pursuits.
View all posts by eileendandashi →
This entry was posted in Book Reviews, New Book Release, Romance, Romantic Suspense, Suspense and tagged Book Review, Romantic Suspense, Sandra Owens. Bookmark the permalink.

4 Responses to Review: LOST IN HER by Sandra Owens ~ Heart-Pounding Romantic Suspense