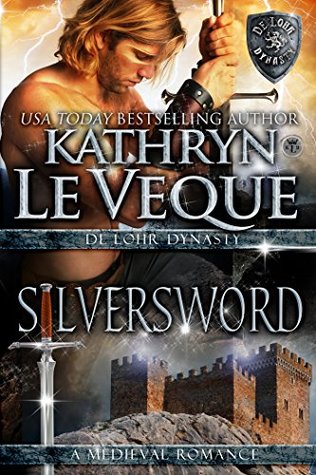 About the Story: 1266 A.D. – Chadwick “Chad” de Lohr, son of Daniel de Lohr (SHADOWMOOR) is a hero at the Battle of Evesham. Saving the hostage Henry III from Simon de Montfort, he is riding high on a wave of royal praise at the conclusion of the battle. But that favor with the king is short-lived.

Henry, once again in power after the death of de Montfort, is determined to rid his country of the de Montfort-supporting rebels once and for all. This includes a campaign of harassment against the nobles who supported de Montfort through the years, namely, the House of de Shera (THE LORDS OF THUNDER TRILOGY). The House of the de Lohr and the House of de Shera are linked by blood, and when Henry orders that a de Shera heiress be removed from Rochester Abbey and placed in Henry’s custody as a hostage to ensure the House of de Shera behavior, Chad races to Rochester to remove his distant cousin from the abbey before Henry can take her hostage.

Chad’s noble act to save Alessandria de Shera is the first step in a chain of events that sees the House of de Lohr increasingly turned against the king. Determined to take Alessandria back to Cheshire where she will be protected by her warlord brother, it’s a race through England as Chad and Alessandria stay one step ahead of Henry’s men in their pursuit to capture her. Aided by Davyss de Winter (LESPADA) and Bose de Moray (THE GORGON), the journey of Chad and Alessandria takes them through life, death, great hardship, fear, and finally passion beyond what they could have ever imagined.

It’s an eventual showdown between Henry and the House of de Lohr once Chad and Alessandria are cornered. Will Henry finally claim Alessandria? Or will Chad ultimately defeat the man he once saved?

My Thoughts:  This story doesn’t have the darker tones I’m used to in author Kathryn Le Veque’s historical romance stories.  In fact, there were many funny moments throughout the book—eye-rolling ones! This is not to say, it didn’t have the suspense or  harsh reality of life which accompanies her usual works.

Close on the heels of success saving King Henry III from death at the battle of Evesham, Sir Chadwick de Lohr snatched Alessandria de Shea from the priory moments before the king’s men could.  Would the King see this as defiance?  Absolutely!  King Henry had become unstable, seeing foe where there was none, doubting the loyalty of his closest men. Chad could not see kin used against kin, to twist a noble knight’s arm to surrender to the treachery of a king. King Henry meted out verdicts and punishment without reason. And Chad did what he felt was right.

Chad was a brilliant and infallible commander.  He was also a man loyal to his family, even those who are related through marriage.  Therefore, he had comrades and cousins in several great houses of the time.

It wasn’t his intention to fall for this small, beautiful woman. But fall he does.  She’s a de Shera.  If he were to marry her, the bond between her house and his would be further strengthened.  He had great respect for her cousins, known as The Thunder Lords.  But with King Henry on the rampage, endangered so many. More trouble, more hostility.  Where would all of this end?  Can King Henry go after all their houses?  If he destroys them as he says he will, if he finds them disloyal, what knights are left to protect him?  Foolish, foolish king!

I enjoyed a powerfully written scene when all comes to heads, knight against knight. Would everything unravel for these noble knights?  A small soft-spoken voice catches the attention of a fully-angered king.  These words come from Alessandria, a simple woman, who’d lived most of her life in a priory.

There are times where choices must be made.  A man must choose what he feels is right. It appears love, family, and friendship are powerful weapons against a king’s commands.  But never are issues just straight forward.  By choosing a path you feel is right, you also affect those very people who mean so much to you.

With a light-hearted hero and simple, soft-spoken heroine, this story holds lots of deep emotions we can all identify with. I felt the love and respect the knights had for each other and the love of wives and children, even comrades-in-arms. Those of us who love reading of the wild times of this epoch, fear not, the author graces us with her keen senses and ability to show the danger, brutality and harshness.

I have yet to read any of this particular series. The author assures the reader each book of the series is a stand-alone. Indeed, this one is easily read and enjoyed.  I highly recommend Ms. Le Veque’s work. Whatever direction her pen leads her, she’s brillant in the telling!

I am a lover of books, both reading and writing. 2018 marks the beginning of my own journey from writer to published author. This blog will showcase various authors' thoughts on the elements of novel crafting, and my attempts to find my voice in writing. While journaling this journey, I hope to encourage others to follow their dreams. Book reviews continue as I have the last four years, only making time for my new pursuits.
View all posts by eileendandashi →
This entry was posted in Book Reviews, Historical Romance, Medieval Romance, New Book Release, Romance, Suspense and tagged Book Review, historical romance, Kathryn Le Veque, Medieval Romance, Romance. Bookmark the permalink.