Book Review: THE WITCH OF BELLUE by Margaret Garth ~ a fantasy of long past, nevertheless pertinent to life

Posted on June 4, 2016 by eileendandashi 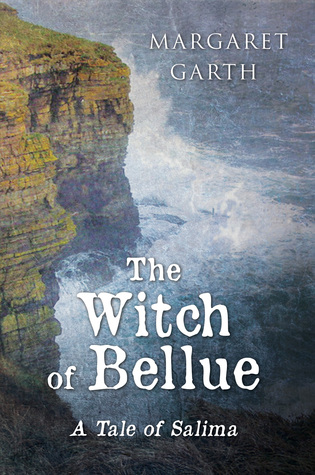 About the Story: Morell, the Holy Man rises from the sea injuring his foot in the process. The event is witnessed by a simple fisherman, Gerharst. Such a man, an emissary of Namier, must be taken to the Fort village of Bellue, where Morell hopes to be provided for into his old age. Morell consults a village Healer about his injured foot, but does not anticipate her local knowledge. Afraid of what she knows, he uses his position to brand her a Witch. But Morell does not bargain for the Witch’s daughter’s gaze to fall upon him.

Tammina, the Witch’s daughter, rejects the advances of Frelius’ heir, Jael, and at the first opportunity he takes revenge and she is ousted from her home town of Bellue. Sent in lieu of taxes to Bosron, Tammina is forced to live on her wits and to fascinate Parandour, the great Lord of Bosron, to gain her freedom.

My Thoughts:  This is an unusual book, stories within stories.  It engaged my attention.  It was a story where I didn’t know where the plot would take me.

Morrell, a supposedly godly man, one who serves Namier, is rather an unsavory character.  He uses people and the name of Namier to manipulate events to attain his greedy desires. Those who cross his path, knowing him for what he truly is, are eliminated, albeit, slyly.

Morrell insinuated Tammina’s mother was a witch, hence he was able to incite people to drive her over a cliff.  Not wanting to be a victim, herself, Tammina, survived by using her intelligence to become whom she had to.  Simply, she became a witch.

I enjoyed how Tammina used her wits and cleverness.  Her mother was a Healer and as young as she was when driven from Bellue, she had learned much from her mother.  Her skills would help her survive.  She always denied she was a Healer, but the wounded or sick were drawn to her, for she had a kind and gentle spirit with a soft touch.  However, she kept people at a distance when she performed as a witch, as she must for Lord Parandour.

I also enjoyed the complexity of Lord Parandour, his ruthlessness, his appreciation of Tammina’s efforts to be a witch, and his logical reasoning side.  He was a man with depth of purpose, which grew as the story unfolded.

The ending of the book was a bit flat, not so much, I didn’t enjoy the read, mind you.  The epilogue confused me as all the characters were new.  I didn’t see it added much to the story.  I’m not sure if the author thought to do a sequel to this story and wanted to give us a glimpse of the ancestors of Lord Parandour, Tammina and Tomar.

All in all, I’m glad I had the book to read this novel, a request from the publisher.  It delves into the workings of the mind and the simplicity of thought some folk have. It is a story showing how greed twists a man, how women, not protected, could end badly, and lastly, it shows good men are honorable by nature.

About the Author: Margaret Garth was born in Manchester. Despite an early desire to write novels, she studied Chemistry and Maths. Marriage resulted in a move to the Midlands and later to Norfolk. She now resides in Bedfordshire with her husband.

Her imagination was kept lively by the demands of her children for stories. Interests are gardening and dressmaking.

I am a lover of books, both reading and writing. 2018 marks the beginning of my own journey from writer to published author. This blog will showcase various authors' thoughts on the elements of novel crafting, and my attempts to find my voice in writing. While journaling this journey, I hope to encourage others to follow their dreams. Book reviews continue as I have the last four years, only making time for my new pursuits.
View all posts by eileendandashi →
This entry was posted in Fantasy, Paranormal and tagged Book Review, Fantasy, Margaret Garth, The Witch of Bellue. Bookmark the permalink.

1 Response to Book Review: THE WITCH OF BELLUE by Margaret Garth ~ a fantasy of long past, nevertheless pertinent to life