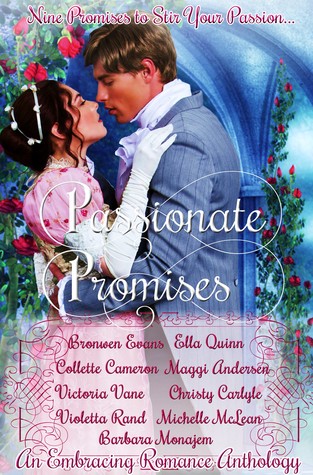 Enter the dazzling world of brawny Vikings, Regency rogues, and sexy scoundrels as they take you on one romantic journey after the other in these tantalizing historicals filled with betrayal, intrigue, and passion.

TO CHALLENGE THE EARL OF CRAVENSWOOD by Bronwen Evans A darkened garden, a case of mistaken identity, a drunken kiss, and a dropped emerald earring, leads Henry on a Cinderella hunt.

A PROMISE OF LOVE by Ella Quinn Can she keep her promise and be true to herself?

A KISS FOR MISS KINGSLEY by Collette Cameron Love relinquished and redeemed as once betrothed Allen Wimpleton and Olivia Kingsley meet again after a three-year separation only to discover, their love is stronger than ever.

STIRRING PASSIONS by Maggi Andersen A passionate promise should never be taken lightly.

A PLEDGE OF PASSION by Victoria Vane Only a madman makes a promise in the heat of passion…And only a fool believes him….

A HIGHWAYMAN’S HONOR by Michelle McLean He’s honor bound to protect his enemy’s daughter; but he never counted on losing his heart.

LORD QUICKTHORN’S BARGAIN by Barbara Monajem To save her sister’s virtue, will she sacrifice her own?

WANTED BY THE WARRIOR by Violetta Rand In a land where vendettas and magic separate the north and south, forbidden love is brewing between two ancient rivals…

NEVER TEMPT A ROGUE by Christy Carlyle An infamous rogue meets his match in a feisty chaperone who has all but given up on love.

My Thoughts:  One thing about buying a bundle like this, it will keep you entertained for hours and hours!  I’ve read some of the authors, and others were new to me.  I think that’s the best part of a bundle.  You know you’ll enjoy some of the stories, AND you have the chance to sample other authors you haven’t read.

I hadn’t read any of Collette Cameron’s work (although I’ve promised myself I would), Michelle McLean, Violetta Rand, nor Christy Carlyle.  So this was a really good bundle for me to read. Here are a few of my thoughts about several of the novellas.

A Kiss for Miss Kingsley by Collette Cameron is a memorable read.  I loved her writing style, and the descriptive thoughts of her characters.

Olivia, newly back to London from the topics, had a time of it readjusting to London, it’s dank, gloom and smell. She’d made a fool of herself years ago in London.  She’d been fascinated by Allen Wimpleton. And now she was being pulled back into the ton. Her Aunt Muriel happened to be the helm of her ship.  She had no choice, but to follow.

Chuckle-worth were the references to A Lady’s Guide to Proper Comportment.

Displaying envy or jealousy reflects poor breeding; therefore, a lady must exemplify graciousness at all times.

Victoria Vane’s A Pledge of Passion is full of wit with a titled heroine who has to marry, only to find the representative of her soon-to-be betrothed none other than the man who broke her heart.  Worst stuff?  He’s honorable, too.  You’ll like this one.

I really enjoyed A Highwayman’s Honor by Michelle McLean.  She’s a new-to-me author.  I’ve always had a thing about pirates or highwaymen who are really honorable but in a dishonorable business.

John, known as Jack, can’t leave a young woman to die on a road out of London from a bullet wound.  One of his men was responsible.  Highway robbers had their values, too.  This particular highway robber was well known.  He was known as a gentlemen. The heroine is no wilting violet, you’ll discover.  She’s also too good for her no-good father.  Yes, I enjoyed this one very much.

I’m always quick to read one of Barbara Monajem’s stories, whether full-length novel or novella.  Her stories very often involve a bit of magic or the paranormal.  I find this keeps them very unique. In this bundle she authors, Lord Quickthorn’s Bargain.

Lord Quickthorn, Rex, is pretty much the rake, but he used to be a good boy and lived in a small village called Whiffle Force.  His half-sister who runs this fairy land village, needs to spend some time away from the village and places Rex in charge.  Rex, just coming from London, makes her a promise not to use any improper magic.  Heck, he doubted he had any magic left in him.  He hadn’t felt it for years.  But true to his word, he didn’t use any improper magic, but a certain miss, Gwen Appleby, turns his head. Could he do the honorable thing?  Gwen didn’t think so, for she knew his reputation. Yet, she sure would like to know what it feels like to kiss a man she’s attracted to.  This was extremely funny, magical and a delight to read.

I particularly enjoyed To Challenge the Earl of Cravenswood by Bronwen Evans.  Again, funny circumstances, witty characters and a most engaging read.

Christy Carlyle was a surprise to me.  I hadn’t read any of her work.  Never Tempt a Rogue was the last of the bundle, but again passionate. The dialog is most risqué for the times. It seems Lord Lindsay had written a book with two of his other friends, The Rogues’ Rulebook, which no one claims to have read, but any lady (older, no doubt), who could get a copy, did.  While Lord Lindsay is defined by this book, a rogue he must be, Felicity Beckett, spent her days as a chaperone to her cousin, and tried to keep her mind centered on ‘proper’ thoughts.  Throughout the novella, she trudged through Etiquette for Ladies.

With overlong hair of burnished gold, sooty lashes over gray eyes, and lips that quirked in mockery often enough to rivet her gaze to their plush fullness, he was the essence of temptation.

How could any free woman resist the combination?

I am a lover of books, both reading and writing. 2018 marks the beginning of my own journey from writer to published author. This blog will showcase various authors' thoughts on the elements of novel crafting, and my attempts to find my voice in writing. While journaling this journey, I hope to encourage others to follow their dreams. Book reviews continue as I have the last four years, only making time for my new pursuits.
View all posts by eileendandashi →
This entry was posted in Fantasy Romance, Historical Romance, Novella, Paranormal Romance, Regency Romance, Romance, Victorian Romance and tagged Barbara Monajem, Book Review, Bronwen Evans, Christy Carlyle, Collette Cameron, Ella Quinn, historical romance, Maggi Anderson, Michelle McLean, Romance, Victoria Vane, Violetta Rand. Bookmark the permalink.

4 Responses to Passionate Promises by nine authors you’ll love to read — all 892 pages!