Review and Giveaway: ONE PINK ROSE by Julie Garwood

Great news! The Clayborne Brides Series, delightful stories of the wild west, will be released this summer as ebooks.  I’ve just finished reading One Pink Rose and loved it!

More news!  If you comment on this post or on the post where I introduce all three of her books sharing why you enjoy books of this genre or author Julie Garwood, you’ll have the chance to win her prequel of the series, For the Roses, hardcopy! 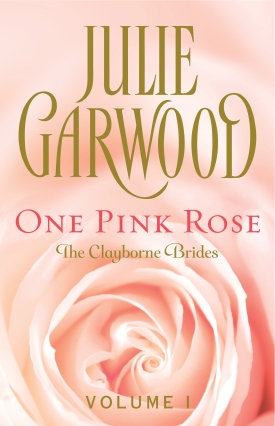 About the Story: #1 New York Times bestselling queen of romance Julie Garwood “knows how to reach out and touch readers’ hearts” with this “laugh-out-loud little read…all delight, pure fun, and yummy” (RT Book Reviews), the first of her beloved Clayborne brothers novellas to be available as a separate ebook—at an irresistible price!

THE CLAYBORNES ARE BACK, AND LOVE IS IN BLOOM!

First introduced in Julie Garwood’s magnificent New York Times bestseller For the Roses, the Clayborne brothers of Blue Belle, Montana, have been embraced by millions worldwide. Their story begins in One Pink Rose. Travis Clayborne may be the youngest of the Clayborne brothers, but he’s most definitely his own man—unless it means saying no to his beloved Mama Rose. And that’s why Travis is escorting young Bostonian Emily Finnegan to Golden Crest, Montana to her new home as a mail-order bride. Emily has made it perfectly clear that she’s taken charge of her destiny and nothing is going to interfere, not even falling in love with a perfect stranger. But they don’t call it the wild west for nothing…

My Thoughts: Whew!  Keep your gun handy in the wild west!  The law was governed by the gun and you’d better be on the right side of the barrel!

Our heroine, Emily Finnegan, had one huge flaw and many small ones, however that being said, flaws can also be perfection.  Depending, of course, what perception they are viewed.   She was too forthright, too impetuous, too honest in her dealings with men (husbandless for that reason), nor was she very amendable.  She lost her temper rather quickly, didn’t seem to know when people tease her, and had an opinion which she projected strongly to those she came in contact.  Yet, she was likeable (maybe because of all these flaws)

But she was going to fix it.  She decided she had to learn out to flirt, etc.  That way, she’d find her man. She headed west.  Yep, isn’t that where those who have dreams reach?  But west from Boston took her to the wilds.  Why not be a mail-order bride?  Oh, did I mention she was gullible?  Yes, laughingly so.

Now Travis Clayborne would do just about anything for his Mama.  She asked for a small favor to help this poor woman who had been stranded in a city far from her destination.  Her escorts had taken sick. Ever the dutiful son, he took the trip—and met Emily Finnegan.

Funny scene after funny scene march this witty story forward.  You’ll be laughing out loud.  Travis had a real sense of humor and frankly, all her flaws were perfection to him.  But marry?  Not in your life! Travis was drawn in hook, line, and sinker!  But he didn’t go easily nor willingly.  Even Emily wanted to steer clear of him, because she was too attracted to him.  For heaven sakes!  She had to get to her brothed, Clifford O’Toole, and Travis was her new escort.

Nothing is easy in the wild west.  Life is lived and played hard.  I was delighted with this book and will be reading the rest of the series.   I’m really pleased the author digitalized this classic!

bout the Author: Julie Garwood is the author of numerous New York Times bestsellers, including Fire and Ice, Shadow Music, Shadow Dance, Murder List, Killjoy, Mercy, Heartbreaker, Ransom, and Come the Spring. There are more than thirty-six million copies of her books in print.

It’s no surprise that Julie Garwood became a writer. Growing up in a large family of Irish heritage, she took to storytelling naturally. “The Irish relish getting all the details of every situation,” she explains. “Add in the fact that I was the sixth of seven children. Early in life I learned that self-expression had to be forceful, imaginative, and quick.”

Creating stories was always a passion for Julie, but she didn’t focus on making it a career until the youngest of her three children entered school. After the publications of two young adult books, she turned her interests to historical fiction. Her first novel, GENTLE WARRIOR, was published in 1985, and there has been a steady parade of bestsellers ever since. Today more than 40-million copies of her books are in print, and they are translated in dozens of languages around the world. One of her most popular novels, FOR THE ROSES, was adapted for a HALLMARK HALL OF FAME production on CBS.

Whether the setting be medieval Scotland, Regency England, frontier Montana, or modern-day Louisiana, her themes are consistent: family, loyalty, and honor. Readers claim that it’s the humor as well as poignancy of her novels that keep them coming back for more. Julie described her goals this way: “I want my readers to laugh and cry and fall in love. Basically, I want them to escape into another world for a little while and afterwards to feel as though they’ve been on a great adventure.”

Julie lives in Leawood, Kansas, and is currently working on her next novel. Biography courtesy of Julie Garwood’s website, http://juliegarwood.com/biography/

I am a lover of books, both reading and writing. 2018 marks the beginning of my own journey from writer to published author. This blog will showcase various authors' thoughts on the elements of novel crafting, and my attempts to find my voice in writing. While journaling this journey, I hope to encourage others to follow their dreams. Book reviews continue as I have the last four years, only making time for my new pursuits.
View all posts by eileendandashi →
This entry was posted in Book Giveaway, Book Reviews, Clean Read, Coming of Age, New Adult, Re-release, Uncategorized, Western Romance, Young Adult and tagged Book Review, Julie Garwood, One Pink Rose, The Clayborne Brides Series, The Wild West. Bookmark the permalink.

6 Responses to Review and Giveaway: ONE PINK ROSE by Julie Garwood