Eileen: Thank you for being on my blog and it’s lovely to chat with you today, Carol.  I’ve enjoyed getting to know you these past two years and even though you live in Wales and I in California, we’re not so far from each other.

For the benefit of our readers, let’s talk about the place you picked for us to meet.  I’ve never been to Wales and this is a great opportunity to sit and talk AND visit a nice tea house– Pettigrew Tea Rooms in Cardiff Castle Walls.

So, are tea rooms frequently visited by people in Wales? And what type of people come?

Carol: I’m delighted to be here today and I’ve enjoyed getting to know you too, Eileen. That’s the beauty of the internet, isn’t it?  It doesn’t feel as if we are separated by thousands of miles.

Eileen, tea is still Britain’s national drink and, despite the rise of coffee houses, tea rooms are still popular with people from all walks of life.

Pettigrew Tea Rooms is very popular because of its unique situation within the Cardiff Castle walls. It also has an olde-worlde feel, as though you are stepping back in time to an era far removed from the hustle and bustle of modern life, and tea is always served in china cups and saucers rather than the modern ceramic ones. The Tea

Rooms stand at the entry to the beautiful Bute Park and it’s perfect for a walk either before or after taking tea.

Eileen:  It’s a beautiful place, indeed. We’ll have to make time to roam the gardens.

Now let’s talk about the production of Noble Satyr written by the talented Lucinda Brant and narrated by Alex Wyndham.  Here are the particulars: 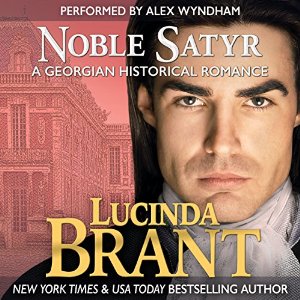 1740s France and England. Abandoned to fend for herself at the court of Versailles, Antonia turns to her distant cousin, the all-powerful Duke of Roxton, to help her escape the attentions of a lecherous nobleman. Roxton is an unlikely savior—arrogant, promiscuous, and sinister. Antonia’s unquestioning belief in him may just be his salvation, and her undoing. This award-winning historical pays homage to Georgette Heyer’s These Old Shades.

Eileen: You certainly read lots of books in the genre I enjoy, and with your reviews, I’ve found when I read them, you are spot on! Since we’re here today talking about an audiobook we’ve both listened to, why not let you start the ball rolling? We’re both revved up about this book/listen.  What do you like most about the book?

Carol: Firstly, thank you for being so complimentary about my reviews, Eileen. Now turning to our review of Noble Satyr. What do I like about the book?  Well, I love the Georgian setting with all its elegance, opulence and decadence. I feel as though I am stepping back in time to a world of powdered wigs, panniers and sedan chairs. Lucinda Brant brings her characters to life on the page, even the secondary ones and she weaves an intelligent and intricately layered tale of scandal, intrigue and enduring love.

Eileen: I like how she begins the story.  I feel as if I’ve stepped into the middle of such turmoil, intrigue and people, reacting to other events, it takes a while for me to get my bearings.  The manner of speech sets it all up.  I can just see those wigs and extravagant attire. The author paints a glorious description of how the men dress themselves, including the ridiculous heels they wear!  And that lace!  It left me chuckling with the image! Somehow I wonder how the men felt like, well, men for heaven sakes!

Carol: Oh yes, I could just picture those bewigged fops, with their lace handkerchiefs and quizzing glasses, prancing about in those heeled shoes!

Eileen: I put narrators in several different categories.  (1) a narrator who utterly destroys the entertainment of a good book, (2) a narrator who isn’t all that exciting, nor does he give anything to a story, (3) a narrator who does marvelous things with a poor story, and keeps you listening, (4) a narrator who works well with an author’s ideas and ferrets out all the author wishes to evoke, (5) and lastly, there is the narrator who takes a compelling story, perfectly in sync with its contents, is entirely engaged and fairly shocks the socks right off you.  Wouldn’t you say Mr. Wyndham fits into the fifth category?

Carol: It’s difficult for me to answer that one, Eileen. I’m a recent convert to audiobooks and Alex Wyndham is the only narrator I have listened to so far, but I have no hesitation in rating him a resounding (5). He is a superb narrator. Each character is pitched perfectly and instantly recognizable – male or female, old or young, noble or servant. I am totally amazed by his ability to consistently maintain such a wide range of characters’ voices throughout the book.

Eileen:  I agree with you.  The voice of Roxton, the duke is so full of ennui!

I enjoyed how Roxton changes through the story, and it’s all about love.  I particularly delighted in the voice of Antonia –  where Mr. Wyndham speaks English with a French accent (she speaks French most the time). I was totally enthralled with the characters and their personalities.  They were so clear to envision. No doubt the narrator excelled in painting a vibrant story.  It took place in full color! Carol, I agree. Alex Wyndham is one of the best I’ve heard.

Carol: I think Alex Wyndham portrays Roxton perfectly from his quietly spoken air of authority to the subtle softer tones as he falls in love with Antonia. He also conveys Antonia’s naïve exuberance for life so well and her French accent is delightful.

Eileen:  I found I was drawn to several of the characters, some who play unpleasant roles, some who add humor, lightening the seriousness. And I really liked the intrigue between the characters. This is so much more than a love story; it’s a story of culture, political events and the plight of those who must live in the tempest.  Not all is made clear at the beginning of the story, which keeps me listening and questioning.  There are a lot of characters to sort through, creating a story fabric of varied textures.  I actually listened to the audio in .75 speed.  Certainly this book will deserve another listen, particularly to enjoy the thoroughly satisfying satire of the lifestyle of that period.

Carol: Yes, there is an interesting cast of secondary characters including the boisterous Lord Vallentine, Roxton’s brother-in-law, who supplies many humorous moments; the lecherous Comte de Salvan and his drug-addled son, each plotting and scheming to get Antonia into their clutches for their own nefarious reasons; Antonia’s grandmother, the Countess of Strathsay, jealous of her granddaughter’s youth and beauty.

I thought the romance between Roxton and Antonia was so well-written. The pairing of the dissolute Roxton with the much younger, innocent Antonia could have been the recipe for disaster but Ms Brant pulls it off brilliantly.  Antonia may be young and virginal but, having lived in the licentious court of Louis XV, she is certainly not naïve in the ways of the world and has no illusions about Roxton. Bored with the world of excess around him, it is easy to see why Roxton would be enchanted by Antonia’s intelligence, openness and spirited nature. What are your thoughts on the romance, Eileen?

Eileen:  This particular romance hit quite close to home.  Although we know that Roxton was close to 40 and Antonia had just reached 20, the love AND romance which grew between the two changed each dramatically when a deep, enriching relationship evolved, not easily understood by couples of similar age.

My husband is 22 years older than I am.  In fact, I was 20 when I first married.  A man of the duke’s age can be very virile and quite alluring to a young woman.  At the same time, society tends to frown on such a match.  Yes, people thought my husband was my father, just as in the story, so the writer was very accurate in her depiction of how society reacts.

I’ve got to say this particular read, Noble Satyr, will certainly remain on my shelf as a keeper. And it’s book one of this series, so I’ve more enjoyment coming.  In fact, I’ve continued the listen of the series; it is amazing.

Carol: Definitely a keeper, Eileen, as are Midnight Marriage and Autumn Duchess, the others I’ve listened to in this series.

Eileen: It was a pleasure discussing this book with you. Thanks for sharing!

Carol: Eileen, I’ve really enjoyed putting our heads together for this joint review and I hope we can do it again.

Eileen: For those readers who would like to visit further with Carol Cork on her entertaining blog, Rakes and Rascals, here is the link. http://rakesandrascals.wordpress.com