Posted on March 2, 2016 by eileendandashi 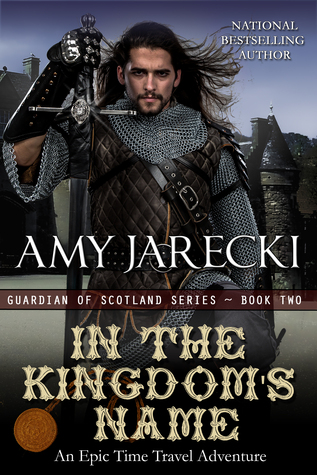 Guardian of Scotland Series:
Rise of the Legend
In the Kingdom’s Name


About the Story: Can history rewrite itself? As the time of treachery draws near, hope is but a fleeting whisper.

After his success at the Battle of Stirling Bridge, William Wallace becomes Guardian of Scotland and is thrown into the machinations of court. But when disaster strikes, the love of his life, Eva MacKay, is hurled back to the twenty first century. Frantically she tries to return, only to face failure with her every attempt. In this tale of breathtaking love and heartbreaking farewells, destiny twists and turns until all hope expires…But does it?

My Thoughts: I truly believe this is the best story I’ve read from the pen of Amy Jarecki.  I’ve always enjoyed her books, but readers, this one wrung and twisted my heart so many times, there were chapters I had a hard time reading for all the tears!

To be caught up in a greater cause, the freedom of the Scottish people, William Wallace gave it his all.  He was a powerful man, very spiritual, led with his heart and intellect.  Author Jarecki has written so profoundly the plight of the man entangled with his hope for his people, it wrenches the emotions as even now a day after finishing the story and as I write these words, tears full of emotion come to me.

With all the passion this man had for his country, Ms. Jarecki further entices the reader with time travel, total crazy love which should not even be considered and finally hope when this reader can hardly continue.

About the Author: Amy loves Scotland! She holds an MBA from Heriot-Watt University in Edinburgh and now resides in Southwest Utah with her husband where she predominantly writes historical romance. Amy is the president of the Heritage Writers Guild, and a member of the Celtic Hearts Chapter of the Romance Writers of America and lectures on writing topics. Amy’s first published novel, now titled Boy Man Chief, won the League of Utah Writers award for Best Manuscript, and the St. George Spark Book Award. Since then, she has won many other writing awards. Her novels, Captured by the Pirate Laird, The Highland Henchman and Beauty and the Barbarian achieved bestseller status on Amazon’s Scottish Historical Romance genre list.

I am a lover of books, both reading and writing. 2018 marks the beginning of my own journey from writer to published author. This blog will showcase various authors' thoughts on the elements of novel crafting, and my attempts to find my voice in writing. While journaling this journey, I hope to encourage others to follow their dreams. Book reviews continue as I have the last four years, only making time for my new pursuits.
View all posts by eileendandashi →
This entry was posted in Highland Romance, Highland Stories, Historical Fiction, Medieval Romance, New Book Release, Romance, Time Travel and tagged Amy Jarecki, Guardian of Scotland Series, Historical Fiction, historical romance, In the Kingdom's Name, Time Travel. Bookmark the permalink.