Audiobook Review: HIS NOT SO SENSIBLE MISS by Jane Charles

Posted on February 22, 2016 by eileendandashi

Would we be better off neglecting the social stations society has placed on us for whom we should associate with? Should we just look for love?  Is it enough? Emily would probably agree love is most important.  But will she be sorry? 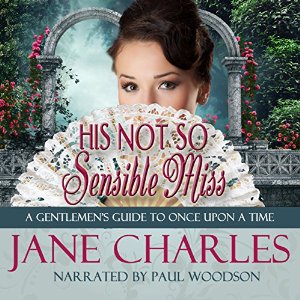 Publisher’s Summary: Emily Frasier has lived as the ward of Duke Ellings since her father died when she was 15. She also knows that soon it will be time to leave his household and make her way on her own. When she discovers a cottage while visiting her aunt and uncle, she knows this is where she wants to live and become a teacher, as her father once was.

Dillon Chambers must find a wife this season in order to please his mother. If she didn’t have control over something more precious than his freedom and life, he would not have made the promise to marry a lady with high connections at the end of the season. When he comes across Emily at his cottage and learns she is the ward of a duke, he feels his luck has finally changed. He could please his mother and settle with a lady he would actually want to have as his wife.

When the truth becomes known in London that Emily is only a professor’s daughter, Dillon knows his parents will never approve. Will he risk everything to have her? Will Emily do the sensible thing or risk her reputation and heart so that Dillon doesn’t destroy all he holds dear?

My Thoughts: Emily was a very astute young lady, daughter of a scholar and respected professor. She, herself, was very intelligent and most learned for even a male of those days. Emily knew her station was a difficult one thereby the male gender would find her an unsuitable match.  After all, her intelligence did not attract a laborer or servant for possible marriage (nor was she attracted to such), and she didn’t attract any of the aristocracy without the necessary pedigree.

Emily comes upon Dillon when he’s planning on working on the roof of his cottage.  She assumes he’s a laborer since he’s dressed as one.  Both hide who they really are, although Dillon more so. Each have their reasons. They are just Emily and Dillon, although Dillon knows or perhaps I should say, assumes he knows her station in society.

The author had me chuckling when Emily tells Dillon she studies countries in alphabetical order.  She, presently, is studying Greece.  Her studies have her reading anything and everything about a country, from philosophy to dance, from ancient times to present.  When her discussion gets rather racy, discussing lesbianism, Dillon isn’t sure the kind of education she’s had, changed her gender preference or not.  This scene was humorously written and very entertaining.

Unbeknownst to her aunt and uncle, Emily secretly meets with Dillon for a month at his cottage—a month of friendship, discussions and pleasurably getting to know each other. Dillon dare not ruin the young lady, however, he is drawn to her wit, beauty and intelligence.

Emily is summoned to London by her guardian, the duke. Both Emily and Dillon are disappointed for their friendship and promises to each other would have to wait upon her return. Will society let them choose outside their stations?

This story was full of complicated situations, misunderstandings, half-truths, and parents who shatter their child’s happiness for family connections. It also had an ending I didn’t guess.  I commiserated with Emily and Dillon and cheered for them when there looked to be a bright ending for them both.  At the beginning of the story, I wish there was more excitement in the plot itself, but it picked up at a better clip later.

I’ve listened to many of narrator Paul Woodson’s productions.  I like the way he tells a story; his cadence of phrase, and inflections of feelings with an animated voice. I particularly enjoy his work with female speech and thought.

This is a good read for readers who enjoy Regency genre complicated by social issues,  interfering families and with adorable, honorable heroes who’ll do anything to have what is theirs.

About the Author: Jane Charles has lived in the Midwest her entire life. In fact, she lived in the same house until the day she married. As a child she would more likely be found outside with a baseball than a book in her hand. In fact, Jane hated reading until she was sixteen. Out of boredom on a long road trip she borrowed her older sister’s historical romance and fell in love with reading. She long ago lost count of how many fiction novels she has read over the years but her love for them never died. Along with romance she has a passion for history and the two soon combined when she penned her first historical romance. What turned into a hobby became a passion, which has been fully supported by her husband, three children and three cats.

When not writing, Jane loves to work in her garden. Besides trying to find the prefect balance so that something is in bloom from the first day of spring to the first hard freeze, she tends her herb and veggie gardens and loves cooking with fresh produce and experimenting with herbs. Someday she hopes to build her dream kitchen so she can cook some of her favorite meals without running out of counter space.

About the Narrator, Paul Woodson: Narrator Paul Woodson records, edits, and master audiobooks commissioned by authors and publishers through Audiobook Creation Exchange (ACX). He’s been an AEA and SAG actor for almost 20 years, with most of his work in Theater. He studied theater at Boston University’s BFA program with work in classical theater, dialect and vocal training. When he was a lad (love that word) his family lived in England where his father did graduate work at Cambridge. I asked Paul how he had such great accents in this reading. His answer was thus:

“Perhaps the immersion at a young age, plus my frequent portrayal of Englishmen and Scotsmen has kept my dialects sharp over the years.”

I am a lover of books, both reading and writing. 2018 marks the beginning of my own journey from writer to published author. This blog will showcase various authors' thoughts on the elements of novel crafting, and my attempts to find my voice in writing. While journaling this journey, I hope to encourage others to follow their dreams. Book reviews continue as I have the last four years, only making time for my new pursuits.
View all posts by eileendandashi →
This entry was posted in Audiobook, Audiobook Review, Regency Romance, Romance and tagged Audiobook Review, His Not So Sensible Miss, Jane Charles;, Paul Woodson, Regency Romance. Bookmark the permalink.