Posted on September 4, 2015 by eileendandashi

What a great cover, don’t you think? The story within cannot BE any more entertaining. Totally over the moon on this one. 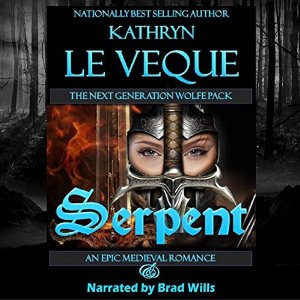 Publisher’s Summary: 1283A.D. – Edward I is in the midst of his campaign to tame the Welsh, but rising from the chaos is a Welsh knight known as the Serpent. Bhrodi ap Gaerwen de Shera is a warrior of tremendous range and power. Descended from the kings of Anglesey on his mother’s side and the earls of Coventry on his father’s, Bhrodi is in the unique position of having Welsh royalty and English nobility. Edward knows he must make an alliance with de Shera. With that in mind, Edward calls upon the mightiest warrior of the north, the legendary William de Wolfe, to pledge one of his daughters to de Shera.

William is honored by the king’s calling; he pledges his youngest daughter, Lady Penelope Adalira de Wolfe, to be the Serpent’s bride. But the Lady Penelope is no ordinary woman; raised by knights, she has been trained by the best and, in spite of her mother’s protests, she fights like a knight. Exquisitely beautiful with dark hair and hazel eyes, she is an unearthly beauty and a fine legacy for the mighty de Wolfe. But Penelope has no desire to be a bartered bride and she resists the king’s directive, but her reluctance is futile.

Join Bhrodi and Penelope as they journey through a world where the greed of men breeds great hatred yet great valor. When Bhrodi is injured in a skirmish, Penelope steps in for her husband to lead the Serpent’s men against the hated English and realizes she must face her own father on the battlefield. Will Penelope survive The Wolfe? Or will The Serpent’s strike become her very own, conquering those she loves?

My Thoughts: Author Kathryn Le Veque always writes such rich and stirring stories. She knows how to hold her audience, engage all their emotions and leave them completely sated.

This is one audiobook I could not put down. It. Was. Amazing! The story unfolded in present-day Wales at an archeological dig. A farmer had drained a marsh to use for additional harvesting, and discovered bones, not just a few, but lots of them strewn over a large area. Was I curious? Immediately. As further bones and other fragments of people’s lives were discovered, the overpowering question and mystery was whatever happened here? Was it a battle? A cemetery? Or a dumping ground for bodies? We part with this act of the novel leaving them to continue the collection of information and further research as we pop into the past, 1283 A.D.

Plenty of excitement in this read, some rather unnerving, if you will. But it was the kind that you just love. King Edward I used people like pawns and knights in a chess game. He manipulated his subjects without remorse. And since I mention him, history has it King Edward had a lisp. Narrator Wills lisps beautifully! (Is that possible?) I’ve heard him in portrayals of King Edward I in other books of my favorite medieval romance authors. Mind you, it doesn’t endear the character to you, as a child’s lisp would. He sounds a little simple, and full of cunning.

Three other characters which were fun to get to know were Lady Penelope’s grandmother, mother and aunt. There is one scene where their Scottish tempers just take off. I loved it! Again Brad Wills puts his heart into that argument – I can’t believe how much like a harpy he sounded! And so Scottish!

Bhrodi ap Gaerwen de Shera was a special hero. He was known as the Serpent, seemingly with no weakness, extremely haughty, and terribly arrogant. But not all is as you think, particularly when he mad dash runs off to collect William De Wolfe and party who were camping alongside the marsh. (big reason why, as you’ll discover) Both men are powers notably respected and feared in their respective realms.

Do you like your heroines who know what they want and are determined to have it? Lady Penelope was an unusual women, and because of her will, strength, intellect, bravery, and yes, love, she not only saved lives, she saved herself. She was a stunning match for de Shera—a betrothal King Edward I commanded, hoping to gain more power for himself. As it happened, it was perfect for them both, not Edward I.

This story has sub-plots aplenty creating a world totally believable and extremely entertaining. Sometimes it’s tears, sometimes fear, sometimes a chortle from a humorous remark, sometimes pain for those who hurt, sometimes the emotion of love in its many forms—whether between spouses, friends, brothers, sisters, children, or parents.

Narrator Brad Wills just keeps wowing me. Each time I listen to him I try to analyze what makes him such fun to listen to. Basically, Mr. Wills starts with a fantastic story and he’s been doing some really super novels in the recent past. Next his voice is one that is just plain lovely to listen to. I suppose because it’s so big, making us readers want to listen! Then you mix into the energy and emotion felt pulsing throughout the story. Where a scene is emotional, he has me laughing – his timing and voice inflections are perfect.

Great read, great listen, entertainment at its best. You two make a powerful team. Loved it!

I am a lover of books, both reading and writing. 2018 marks the beginning of my own journey from writer to published author. This blog will showcase various authors' thoughts on the elements of novel crafting, and my attempts to find my voice in writing. While journaling this journey, I hope to encourage others to follow their dreams. Book reviews continue as I have the last four years, only making time for my new pursuits.
View all posts by eileendandashi →
This entry was posted in Audiobook, Audiobook Review, Historical Fiction, Historical Romance, Medieval Romance, Romance, Women's Fiction and tagged audiobook, Audiobook Review, Brad Wills, Kathryn Le Veque, King Edward I, Medieval Romance, mythology. Bookmark the permalink.