This wonderfully captivating series has been a pleasure to follow with its emotionally conflicted, vulnerable characters who eventually find their happy ever afters. 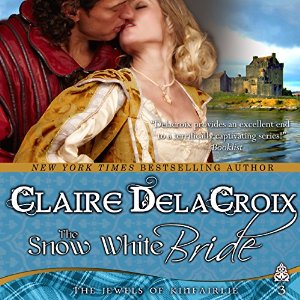 The Jewels of Kinfairlie:
The Beauty Bride, book 1
The Rose Red Bride, book 2
The Snow White Bride, book 3
The Ballad of Rosamunde, book 4, a novella

The complete series in: The Jewels of Kinfairlie Digital Boxed Set

Publisher’s Summary: The laird of Kinfairlie has helped his sisters to find husbands. Now the laird himself seeks to wed and pins his hopes on The Snow White Bride.

Lady Eleanor knows better than to dream of romance and love. Married twice to secure her father’s alliances, she has learned that she is desirable only for her fortune. When the Laird of Kinfairlie’s sisters ask her to wed their brother, Alexander, Eleanor agrees, expecting only to save herself from danger.

Alexander is like no man she’s known before. He is a man more interested in courting her smile than her obedience. He is a man who values her counsel as much as her newly awakened passion. He is unaware that Eleanor is the key to a fortune that could ensure the future of everything he holds dear.

Now, ruthless enemies will stop at nothing to secure Eleanor’s capture. Will she dare to trust her new husband before it’s too late for her, for Alexander, and for Kinfairlie?

My Thoughts: There is no doubt this series has captured my imagination. I love the way author Claire DelaCroix develops the story using a formal, archaic speech. She helps place me squarely into the setting. Narrator Saskia Maarleveld’s produces an awesome listen with her silky, velvet narrative voice with flawless understanding of the characters’ emotional state as depicted by dialog.

In book 3 of the series, Alexander has had the tables turned. He’s always been the trickster, the one who gets his way. Although the reader sees he is slowly changing in how he perceives his deeds, the deeds have already been one. He managed to force the marriage of his two older sisters. However, the means to attain this goal was somewhat callous, the outcome produced splendid results.

Some would say Alexander was not ethical, had a mean spirit. Some being his sisters. However those in his keep fairly adored him, something the reader couldn’t ascertain in the previous books. But in this story, his and Eleanor’s, we see a completely different side of this man. It’s true his financial means are almost nonexistent. He struggles to care for his castle and its people. The most amazing thing about this man is he has not shared these circumstances with his sisters. He wanted them not to worry. He had them believe all was plentiful and he just wanted them wed.

At the beginning of this tale his remaining three youngest sisters decided to trick him into marriage. They put into play the saying what is good for the goose is good for the gander. Eleanor happened to arrive afoot, bedraggled and exhausted on a winter’s night, finding shelter within Kinfairlie’s chapel. She was there when all congregated for prayers the next morning. The sisters saw her to be a person of well breeding and quickly concocted a scheme their brother. They proposed to have her take shelter with them and consider marriage to their brother if he was to her liking. And thus she agreed. The net was cast to one of trickery.

Eleanor has had a hard time of it. She has been twice married and twice over she has been treated unkindly. Could she trust Alexander or was she so marred she could never trust a man again? Could she share her deepest secrets with him and if she did, would he hate her? Alex was out to get the truth. Lies he could not tolerate. Not through fear but through kindness, he decided to get the truth from this woman. There was something about her that made it so. He would make her smile. He would see her happy. “On that you can rely!”

Sometimes one reads a story where you know what will happen either because it is so obvious or you learn it from one of the characters. There are several places in this story that were a complete surprise and complete enjoyment. To this point we have learned the sisters are the gems of Kinfairlie. I would propose Alex be counted among them.

There’s just enough cliff hanger which more than entices you to finish the series with The Ballad of Rosamunde. I love the series, love the author and love the narrator. 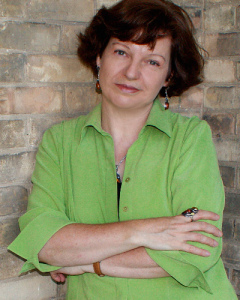 Claire is currently writing the True Love Brides Series, which began with THE RENEGADE’S HEART. These are paranormal medieval romances set in Scotland and continue the story of the eight siblings at Kinfairlie. THE BEAUTY BRIDE, book #1 of the Jewels of Kinfairlie trilogy of medieval romances, introduces the family. THE RENEGADE’S HEART is Isabella’s story and THE HIGHLANDER’S CURSE is Annelise’s story. THE FROST MAIDEN’S KISS will be next in the series and will be Malcolm’s story.

She blogs most weekdays at her blog, Alive & Knitting, at: http://www.delacroix.net/blog 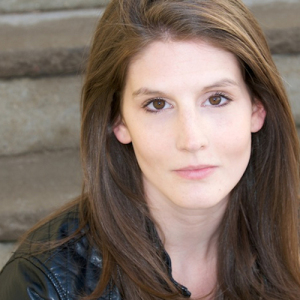 About the Narrator: Saskia Maarleveld lives in New York City, working full time in the voice over world. Hailing from New Zealand and having lived in Europe for many years, Saskia’s voice can deliver an incredible variety of accents and characters. Able to switch seamlessly from general American to countless accents and dialects, Saskia brings any story and its characters to life.

She has recorded over 80 audiobooks using these skills, working with Recorded Books, Audible, Tantor, DuArt and Brickshop Audio. Familiar with various genres, from romance to mystery, fantasy/sci-fi  to historical fiction, she can often be heard speaking in British, Australian, New Zealand, Scottish, Irish and French accents…among many others.

I am a lover of books, both reading and writing. 2018 marks the beginning of my own journey from writer to published author. This blog will showcase various authors' thoughts on the elements of novel crafting, and my attempts to find my voice in writing. While journaling this journey, I hope to encourage others to follow their dreams. Book reviews continue as I have the last four years, only making time for my new pursuits.
View all posts by eileendandashi →
This entry was posted in Audiobook Review, Highland Romance, Historical Romance and tagged Audiobook Review, Claire Delacroix, Highland Romance, historical romance, Saskia Maarleveld. Bookmark the permalink.