Posted on August 5, 2015 by eileendandashi 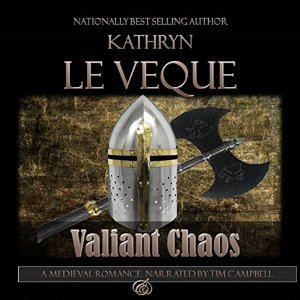 Listeners take note: This work was originally published under the title For Love and Honor, but it had been reissued with a new ending and bonus chapters!

1469 A.D. – Brogan d’Aurilliac is a master sergeant in the infantry of Edward IV. The son of a Germanic knight, he came to England at his father’s death and worked his way up through the ranks of the infantry to become the king’s highest ranking soldier. Brogan is a very large man with power and skill, but uneducated due to his family’s immigrant social standing.

He meets our heroine by chance, a member of the mighty de Nevilles, the most powerful ruling family in England. The Lady Avalyn du Brant’s uncle is the all-powerful Richard Neville, “The Kingmaker”. Although Brogan knows she is out of his league, he is nonetheless taken by her. Avalyn, too, is intrigued by the big soldier with the heavy accent and menacing presence. What starts out as pity for the man turns to something else and her uncle, used to meddling in people’s lives, seeks to separate his niece from Brogan by betrothing her to a powerful but foolish baron.

Yet Avalyn is intelligent; she takes charge of the situation and, like a great chess match, seeks to beat her uncle at his own game. Brogan, the man that enemy and ally alike call “The Monster” in battle, offers support and affection such as Avalyn has never known in this story of reversal of roles.

She is the ‘smart and cunning’ one in this battle to save her relationship with Brogan from her uncle’s destruction.

My Thoughts: From the first sentence, she had me. “It was a lovely night to die.” Is it possible to stop at this point? It was a possible night for two to die, and it didn’t happen. What happened was a love story so powerful and potent in its intensity, it gripped my being. Is love so instantaneous and all giving in such a short time? I think it could be. I knew my partner for a mere 10 days before we knew. That was 45 years ago! Yes, this is believable and a dream come true for two and the time they needed it most in their lives. But that falling had severe consequences.

The author gave us two endings, one the original and one she made since remarks were made that it wasn’t the happy ever after story they needed. I preferred, Ms. Le Veque’s original ending. I believe her instinct was correct. The ending felt very plausible and had a happy ever after ending, just not the usual. I can’t elaborate more on the ending, but it was most satisfying.

Avalyn was an unusual heroine who fell in love with someone not of her station in love. Chemistry and circumstances brought them together. The moment, events, and need were kindled which made them desperate to have each other. Sometimes, we love people we shouldn’t for whatever reason. It takes a strong person in both instances to follow their heart or not. Avalyn was just such a woman.

She had an uncle who in his greed for power manipulated those around to have what he wanted. Women, of course, had little choice in their lives and none when it came to decisions of marriage. I thought Avalyn a worthy heroine, very compassionate and caring for those around her, sometimes to the point of weakness. But our lives are made of small decisions and each builds on the other. Hers strayed not from this path.

Truly Brogan, a big bear of a man, even with his slowness, was not less of a man. He loved Avalyn with all his heart and being. Many a time throughout the story, as this particular author is an expert in doing, I found myself in tears. Their love was so sincere and tender, so deep and all-encompassing, it brought tears with its feeling.

The honor displayed by William, a knight in every aspect, enriched the story for he was very much a secondary hero. Brogan, a man sparked by love, found he, too, had a knight’s heart, but knew it not. Sir Alban, old friend to Brogan was endearing and special with his role as knight and father image to Brogan, provides more for the reader/listener to ponder of love and loyalty.

Narrator Tim Campbell breathes voice to Ms. Le Veque’s words providing full depth of what she had in mind, with the intended emotion and peril. He’s superb in his characterization of women’s voices, and captures the intense emotion and suspense throughout its telling. I loved Brogan’s voice with his German accent and German language as well as his mother’s. Narrator Campbell fully compels the listener to appreciate the various emotions between Avalyn, Brogan, William and Alban.

About the Narrator: Tim Campbell (AGMA, APA) is a voice actor who lives in Sherman Oaks, CA, studied at Pepperdine University and the University of Southern California, and hails from Woodinville, WA, a small town just outside of Seattle.  He developed a love of stories from an extremely early age, with both his parents and his grandmother reading to him daily in an effort to fill a voracious appetite for narrative.  The original deal was three stories and three songs before bed, but that was rarely enough for young Tim.

This love of language was developed further throughout high school and college, as Tim became immersed in the worlds of theater, literature, and music, earning a BA in Music and Theater and a certification from the prestigious Great Books program at Pepperdine University, where he graduated Magna Cum Laude as the outstanding graduate of the Fine Arts Division.  He was awarded a teaching fellowship to study Vocal Arts at the University of Southern California, where he received an M.M. and G.C. while teaching private voice for four years.  He was named outstanding graduate of both the Vocal Arts department and the Thornton Opera program upon the completion of his studies, and proceeded into a promising career as a young opera singer.  Singing with several prestigious companies around the United States, including Aspen Opera Theater Center, Mill City Summer Opera, Wolf Trap Opera, as well as with the Los Angeles Opera Chorus and the Los Angeles Master Chorale, Tim decided to base his career full-time from Los Angeles in the fall of 2011.

At the same time Tim was flourishing as a young singer, he decided to pursue another of his lifelong passions.  Audiobooks.  A voracious reader his entire life, growing up Tim was often so busy with sports or work that the only time he could find to read was driving from one activity to another, working in the yard, or while working out.  Thus began a love of audiobooks that continues to this day.  In 2011, with the help of Audible.com, ACX, and the sound designers at AudioRealms.com, Tim built a home studio, and started submitting auditions for books on ACX.com.  With his first five auditions, Tim booked three productions, and has been working full-time as a narrator since that day.

In fact, Tim has had so much success and is in such high demand for his audiobook narration and production, he’s had to cut back on his traveling as a singer, basing his opera and theater career almost exclusively in Los Angeles now.  Booking projects six to seven months in advance, Tim maintains a rigorous production schedule, while still finding time to sing with the LA Opera Chorus and in productions and concerts all over Southern California.  He lives with his beautiful wife Callista Hoffman-Campbell in Sherman Oaks, CA where they enjoy hiking, dancing, and spending time with friends.  The number of people to whom Tim owes a special debt… teachers, mentors, friends and family… is far too great to list in this space.  Suffice it to say, he has been given great gifts in this life, and will continue to endeavor to be a reflection of the love which has been so selflessly bestowed upon him by so many. Taken from website: http://www.timcampbell.me/

I am a lover of books, both reading and writing. 2018 marks the beginning of my own journey from writer to published author. This blog will showcase various authors' thoughts on the elements of novel crafting, and my attempts to find my voice in writing. While journaling this journey, I hope to encourage others to follow their dreams. Book reviews continue as I have the last four years, only making time for my new pursuits.
View all posts by eileendandashi →
This entry was posted in Audiobook, Audiobook Review, Dark Romance, Historical Romance, Medieval Romance, Romance, Romantic Suspense, Uncategorized and tagged Audiobook Review, Kathryn Le Veque, Medieval Historical Romance, Valiant Chaos. Bookmark the permalink.