Audiobook Review: WITH HIS RING by Cheryl Bolen, narrated by Rosalind Ashford

Posted on July 3, 2015 by eileendandashi 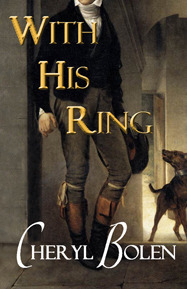 The Brides of Bath Series:
The Bride Wore Blue
With His Ring
The Bride’s Secret
To Take This Lord
Love in The Library
Christmas in Bath

Publisher’s Summary: Glee Pembroke has turned down countless offers of marriage because she has secretly been in love with her brother’s best friend, Gregory Blankenship, all her life. When she learns Gregory will lose his considerable fortune if he’s not wed by his twenty-fifth birthday, she persuades him to enter into a sham marriage with her. What he doesn’t know is that she plans to win his heart. She will do everything in her power to make him happy – including mimicking the ways of a “fast” woman since he’s noted for alliances with women of that sort.

Why did he ever allow himself to marry the maddening Glee? He’d thought they would have great fun, but at every turn, she exasperates him. Why does she persist in wearing the bodice of her dresses so blasted low? Why do other men persist in flirting with her, his wife? And why in the blazes has his heretofore complacent life been turned upside down by this sham marriage? He finds himself longing for a real marriage, but for reasons he cannot divulge, that can never happen.

My Thoughts: Glee Pembroke lived with two love matches right at her door.  Diana and her brother, George, were so in love it made Glee jealous, and felt guilty she was jealous.  Then there was Felicity, her sister, and Thomas.  After enduring two Seasons and refusing eight and a half marriage proposals (one proposal she nipped in the bud before it reached George), she decided she was a spinster, at nineteen. Her goal was to have her own home, a small townhouse in town.  But wise sister-in-law Diana, knew who her heart yearned for–none other than Gregory Blankenship, known to friends as Blank. Diana told Glee she should fight for what she wanted, even though Blank was inclined to roguish ways.  After all George was the same before he married Diana.  Reformed rogues make the best of husbands.

Blank had been around all of Glee’s life, being best friends with George.  He saw her as George’s little sister and would ALWAYS see her as such.  Glee had lost her heart to this gallant lad who helped her with pulling out one of her baby teeth.  He’d treated her gently with this gorgeous smile which had affected her then.  Now he’d been using it on women.  He was hell bent in his rakish ways now as a man.  He grew up and well Glee knew.  She’d always hidden the way she felt for him. But she wasn’t the kind of lady Blank’s liked.  He liked the doxy sort, lower than low cut dresses practically exposing the full breast. How would she catch his eye when he still saw her as 12 years old?

In military precision Glee planned her capture–first him and then his love.  The first was easier than the second.  Glee was smart with a quick mind, excessively daring, conniving and an all-around  wonderful and lovable character.  Even if Blank had a hard time being convinced, I was not!

Blank was a rake, never wanted to marry and frankly planned on enjoying a certain widow with no strings attached.  Who would want to shackle themselves to some harpy?  Things were changing. Blank’s father had recently past, his will and testament read by his solicitor was a shock to Blank. He’d lose his inheritance if he didn’t marry by age 25.  That was only a few months away.  How could he find someone that quickly?  Was he willing to give up his inheritance, passing it to his brother? He decided to spend some time with George hoping to get some pointers, after all he was happily married.

And our Glee was ready!  With acumen, she landed her fish. With logic she snared poor Blank.  But can she get him off the hook and into her boat?

Author Cheryl Bolen entertained once again with this delightful, humorous and sometimes quite comical regency romance.  I’m really enjoying this series, the next is The Bride’s Secret. Rosalind Ashford, as narrator, story tells in Regency style, impeccable dialog in a fine, clear, soothing and smooth flowing voice clearly setting me in the milieu of the ton aristocracy. 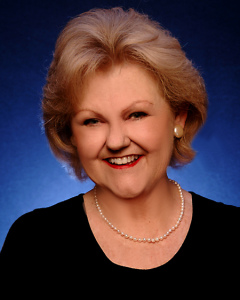 Cheryl Bolen is the acclaimed author of more than a dozen Regency-set historical romance novels. Her books have placed in several writing contests, including the Daphne du Maurier, and have been translated into 11 languages. She was named Notable New Author in 1999, and in 2006 she won the Holt Medallion (Honoring Outstanding Literary Talent) for Best Short Historical Novel. Her books have become Barnes & Noble and Amazon bestsellers.

A former journalist who admits to a fascination with dead Englishwomen, Cheryl is a regular contributor to The Regency Plume, The Regency Reader, and The Quizzing Glass. Many of her articles can found on her website, www.CherylBolen.com, and more recent ones on her blog,www.CherylsRegencyRamblings.wordpress.com. Readers are welcomed at both places.

Cheryl holds a dual degree in English and journalism from the University of Texas, and she earned a master’s degree from the University of Houston. She and her professor husband are the parents of two sons, one who is an attorney, and the other a journalist. Her favorite things to do are watching the Longhorns, reading letters and diaries of Georgian Englishmen, and traveling to England.

About the Narrator: Excerpt from interview with Joanna Penn.

You can find the complete interview by following this link: http://www.thecreativepenn.com/2014/06/09/audiobook-narration-rosalind-ashford/

Rosalind, tell us just a bit more about you and your background as a voice talent and narrator.

Well, back when the Earth was cooling, I took Dramatic Arts in college and university, and then moved to this country, to New York. I really started with theater, but I’ve done film and TV, and then I just fell into radio and voice work. And I actually narrated my first book on radio, for Books for the Blind, back in—dare I say—1980, so I’ve been reading books aloud for a few years! I took a break, did other things with my life, and then came back into the business about three years ago, I think it is now.

I had continued to do voice work, commercials, radio, TV, e-Learning courses, and now that everything is digital, it, it really doesn’t matter where you’re located, so I do work for the European market, I do work for you, and you’re in London, authors that could be anywhere in the world. So, my background is extensive. And I have to say that narrating audiobooks is perhaps the most challenging of all the types of performing I’ve done. It’s also the most rewarding.

I am a lover of books, both reading and writing. 2018 marks the beginning of my own journey from writer to published author. This blog will showcase various authors' thoughts on the elements of novel crafting, and my attempts to find my voice in writing. While journaling this journey, I hope to encourage others to follow their dreams. Book reviews continue as I have the last four years, only making time for my new pursuits.
View all posts by eileendandashi →
This entry was posted in Audiobook, Audiobook Review, Historical Romance, Romance and tagged Audiobook Review, Cheryl Bolen, Regency Romance, Rosaline Ashford, The Brides of Bath Series, With His Ring. Bookmark the permalink.

6 Responses to Audiobook Review: WITH HIS RING by Cheryl Bolen, narrated by Rosalind Ashford