“Drastic times call for drastic measures.” Quote from A Kiss for Lady Mary 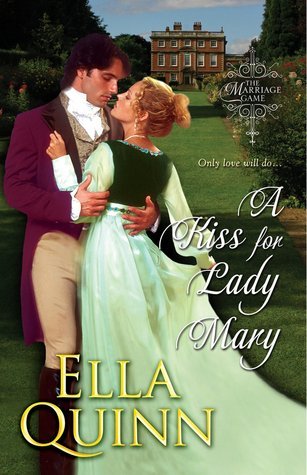 About the Story: Ella Quinn’s bachelors do as they like and take what they want. But when the objects of their desire are bold, beautiful women, the rules of the game always seem to change… Handsome, charming, and heir to a powerful Viscount, Christopher “Kit” Featherton is everything a woman could want—except interested in marriage. So when he hears that someone on his estate near the Scottish border is claiming to be his wife, Kit sets off to investigate.  Since her parents’ death, Lady Mary Tolliver has been hounded by her cousin, a fortune-hunting fool after her inheritance. Refusing to settle for anything less than love, Mary escapes to the isolated estate of rakish bachelor, Kit Featherton. Knowing he prefers Court to the country, she believes she will be safe. But when Kit unexpectedly returns, her pretend marriage begins to feel seductively real…

My Thoughts: Ella Quinn entertains once again with very lovable characters. Outside the two main characters, Lady Mary and Kit, I particularly enjoyed the Dowagers Viscountess Featherton and Duchess of Bridgewater. Both were grandmothers to the hero and heroine of the story. They were elder women with sharp minds who had perfected their match making skills. They sharpened them further in setting up Lady Mary and Kit to fall in love. The story setting was quite humorous and more so since both Lady Mary and Kit didn’t know they were set up.

Lady Mary was being hounded by her cousin who wanted to compromise her to force her hand. She had barely escaped his earlier efforts to trap her. Therefore under the tutelage of her grandmother, the Duchess of Bridgewater, she was removed along with her aunt, Lady Eunice, to a remote place, somewhere Gawain Tolliver wouldn’t find her. If she could just stay out of his way until she gained five and twenty, she would be able to keep her inheritance and her independence. Lady Mary could not comprehend why Uncle Hector had insisted she marry his son, Gawain. She only knew she didn’t want to have anything to do with him.

I really liked the scene where Mary talks with her grandmother and aunt about the wild scheme that has been concocted for her protection. From this point forward, the reader feels the humor in the whole set up. I also felt the determination and slightly insane sounding grandmother convincing Mary to impersonate the wife of the owner of Rose Hill. Mary goes along with the charade, however reluctantly, as it would protect her from Gawain. Was she ready for Bedlam as her grandmother seemed to be?

She doesn’t plan to fall in love with Rose Hill. It was very run down, since the steward was old and been sick for some time. She acted as its mistress becoming very much a part of the estate, village and people who lived from the bounty of the land. She used her intelligence to at least leave the property better than she left it. Mary felt very bad with this impersonation, but it didn’t affect the way she treated those around her. In the impersonating, she also gained admiration and respect from the servants within Rose Hill and even the village close by. She knew her time was growing short in seclusion. She had to go back to London. But her worst nightmare showed up, arriving in the form of the Honorable Mr. Christopher (Kit) Featherton. This was simply delicious!

Kit had seen the numbers of profitability of Rose Hill increase. This intrigued him, but then he was told a woman impersonating his wife was living there. He decided to rid his property of her personally. It’s quite humorous as he nears his property, he is recognized and given the cold shoulder. By the time he reaches the property he wonders what he will find. When he sees the repair and condition of the property looking very nice, he is more intrigued who this woman is.

This is the delightful part – she is the beauty he saw at a ball several years back and hadn’t gotten her out of his head. Mary, of course, remembers him. She had named him Mr. Perfect. He always danced with wall flowers doing the pretty and all the Season’s mamas were hoping him to be their son-in-law. She had hoped he would dance with her. He did not even look her way. And now the man stood before her. Could she survive the embarrassment?

Ms. Quinn has set the stage, or should I say the grandmothers had? After all, it was their plan the two should marry. Ms. Quinn told the story in her amusing way, getting many chortles from me as both Mary and Kit get more desperate. Mary wants him. Kits wants her. The grandmothers want them. But what’s the problem? The problem is simply Kit is too perfect, too much the gentleman. Would he ever kiss his intended without actually being betrothed? Not from Kit. It would never happen. Mary is afraid to show him anything about her feelings if she doesn’t know how he feels. After all, she is every bit the lady. What will it take to break this dilemma?

Loved the story, its plot and how slang current to the times is used in dialog.  I highly recommend Regency reads from Ella Quinn.

I am a lover of books, both reading and writing. 2018 marks the beginning of my own journey from writer to published author. This blog will showcase various authors' thoughts on the elements of novel crafting, and my attempts to find my voice in writing. While journaling this journey, I hope to encourage others to follow their dreams. Book reviews continue as I have the last four years, only making time for my new pursuits.
View all posts by eileendandashi →
This entry was posted in Book Reviews, Historical Romance, New Book Release, Regency Romance, Romance and tagged A Kiss for Lady Mary, Ella Quinn, Historical Regency Romance, historical romance, The Marriage Game Book Series. Bookmark the permalink.

1 Response to New Release from Ella Quinn: A KISS FOR LADY MARY, book 7 of the Marriage Game Book Series