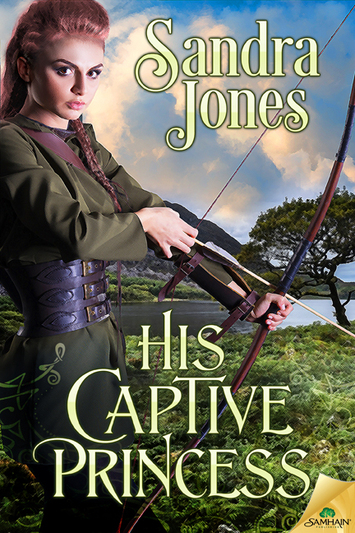 About the Story: Earned respect is sweet…but deserved revenge is sweeter.

Warren de Tracy was assured the Welsh village of Dinefwr would be an easy conquest, as would the widow of its fallen prince. Wedding her will appease the locals and win the respect of his liege, the usurper King Stephen.

Instead, Warren is ambushed, taken prisoner by a hooded Welshwoman with skin that glows like moonlight. If he must die at her hands, at least his honorable death will silence the whispers of disloyalty hanging over his name.

Princess Eleri has never seen a knight as stoic—and as eager to die—as Warren. She’d love to oblige the bastard, but something in his ocean-blue eyes stays her hand. Plus, suspicion nags at her, for the arrows that wounded him and killed his men are Norman, not Welsh.

A ghostly prophecy portends danger that thrusts the enemies closer together, where hate explodes into passion that won’t allow Eleri to surrender Warren to her vengeful clan. But returning him to his king breaks more than it mends…and for Warren, retaliation will be sweet, indeed.

Warning: Contains a Norman warrior with a thirst for justice, a Welsh rebel princess with second sight and a steady bow hand, magical prophecies, and a plot of royal proportions.

My Thoughts: Even though Warren de Tracy was one hunk of a man, wanting only to please his King and gain his respect, there are others who would not have him succeed in his new mission—that of procuring the hand of Princess Eleri.

Princess Eleri was not one to go willingly to his bed or any other’s bed. She was a warrior in her own right, albeit a rather petite one. She and her brother-in-law were witness to a small conroi of men ambushed. Our hero, a Norman was the only one left alive of his men, wounded severely, but alive. Even though she personally did not wish him dead, he was Norman and they were enemies.

Something stayed Eleri’s hand. She didn’t kill him, but took him to camp, tended his wounds. Mayhap he would be a good slave, he was brawny enough. He’d have just as soon die from his wounds for there were whispers of treason connected to his name and who wanted to be a slave? Half-conscious he was strongly aware of this woman who had climbed out of a tree with a bow, ready to protect her group. Who was she?

Princess Eleri was a seer and by a vision felt she shouldn’t kill this man. As the prisoner healed she didn’t know what to do with him. How did he end up with a wound from the arrow of a Norman bow? Lots didn’t add up in her mind. For ‘tis true, many forces were in play. An even bigger tangle, she realized he was the man who had been sent to be her betrothed.

Eleri and Warren were attracted to each other. They were evenly matched–equally brave and ruthless. It was interesting how the captive, Warren, soon had captured the princess and as events unfolded each relied more upon the other rather than think of themselves as captive and captor, thereby planting the seed of admiration and respect.

In the telling, I felt I needed more secondary character development. The magical side of the story was quite fascinating, but I kept asking myself why this phantom of an old woman could only be seen by Eleri and then later by Warren? What did it symbolize?

I truly enjoyed the plot itself, plenty of surprises at the end with a happy ever after ending. I would have enjoyed the story more if events hadn’t happened so rapidly, events felt condensed without enough side story. I believe I would have appreciated this intriguing story more in a full length novel. It would have made it easier to follow and certainly with Ms. Jones’s writing style, more entertaining.

Note: it would be very helpful to have a glossary of Welsh words used in the story. That way I could follow the story better.

About the Author: Sandra Jones is the author of sensual historical romances. She’s worked as a bookseller and a librarian, where she indulged in her love of old books. When not researching or writing, she enjoys being with family, reading, watching British TV, and traveling.

Sandra loves to hear from her readers: visit her website http://www.sandrajonesromance.com

I am a lover of books, both reading and writing. 2018 marks the beginning of my own journey from writer to published author. This blog will showcase various authors' thoughts on the elements of novel crafting, and my attempts to find my voice in writing. While journaling this journey, I hope to encourage others to follow their dreams. Book reviews continue as I have the last four years, only making time for my new pursuits.
View all posts by eileendandashi →
This entry was posted in Medieval Romance, New Book Release, Romance, Romantic Suspense, Supernatural Suspense, Women's Fiction and tagged Book Review, His Captive Princess, historical romance, Sandra Jones. Bookmark the permalink.

4 Responses to New Release: HIS CAPTIVE PRINCESS by Sandra Jones