As in Alice in Wonderland, Alice (Paige) fell through the rabbits hole (fairy ring) to a parallel universe.  Ms. Pillow lets her mind have its way and has created a light, fun listen with a voiceover giving the listener every chance to smell, feel and touch the new world she finds herself in.

Publisher’s Summary: An outcast because of her psychic abilities, Paige doesn’t expect her people to rescue her when a zealous sect of Faerians sacrifices her to their gods. Thrown through a fairy ring to a new dimensional plane, drugged on ambrosia, she is compelled to seduce the first man she meets. Only when the effects wear off and she’s left with an insatiable husband expecting more than she’s willing to give, does Paige discover the true extent of what the fairies have done. Ordered by the king to marry, Sir Aidan of Fallenrock is dead set against taking a bartered bride. He believes his people should be patient and wait for the gods to bless them. When the beautiful Lady Paige comes through the sacred rings, kissing and touching him like she knows their joined fate, Aidan’s sure he’s being rewarded–until his new bride tries to back out of their marriage.

My Thoughts: Ms. Pillow wonderfully described this world of Fallen Rock, I could smell spring, the renewal of the season, and with that came the renewal of its creatures.

I loved what multi-talented Rebecca Cook did with the narration. Male voices were quite masculine while the narration outside of dialog was soothing and pleasant to listen to and well-paced. Immediately the narrator takes this event and runs with it. She made me laugh at the very first sentence! She certainly had my attention. I loved how she made all the characters and events so very real, how she mimed the drugged-induced thoughts of Paige, the kindness and respect from Sir Aiden.

Paige meets us naked in her world, being carried to the Fairy Rings to be sacrificed to the gods. She’s begging for her life, not really believing she would be sacrificed. The Priestess of the Faerians had Paige drink ambrosia before they tossed her into the ring, taking her to a parallel universe. From that moment on Paige was no longer the girl who lived alone in the forest, protecting herself with a bow and arrow.

Once through the Fairy Ring she was in a new dimension with different rules, people, culture and life. Paige had fallen outside of Fallen Rock in a place called Hanging Forest. It was obvious the fairies wished her to fill a wish of a very likeable knight, Sir Aiden. Paige had no desire to be any man’s property. Drugged with this potent drink she was very sensual and aroused when Sir Aiden came upon her in this condition. He had wanted a wife, the oracles had prophesied he would need one soon. When he saw Paige he knew the gods had seen fit to make her his. They had answered his prayers. Paige, with the ambrosia running through her veins, could no more deny her baser needs than fly. Sir Aiden was completely enamored with his Lady Paige.

Paige had a talent, she could see the future events, something of an oracle very much revered on her new world and something she denied in the old. She was marked as a witch, therefore had been living some time alone in the forest.

Once the ambrosia wore off, Paige couldn’t believe what she had done, only wishing to return to her old world. It took much convincing and patience on Aiden’s part which included some very potent love scenes. She was torn. She couldn’t help the way she reacted to Aiden and loved the way he made her feel, but could she trust him?

All in all, this unusual read/listen was fun for me. If you like very sensual, explicit sex scenes, you’ll experience it here. If you enjoy the idea of fairies, other worlds and the passing from one to another, you’ll probably enjoy what the imagination of this author has conjured.

About the Author in her own words 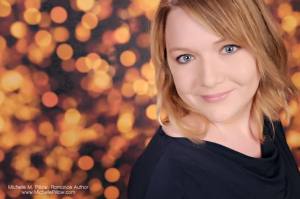 I have always had an active imagination. Ever since I can remember, I have had a strange fascination with anything supernatural and sci-fi — ghosts, magical powers, and oh! vampires. What could be more alluring than being immortal, all-powerful, and eternally beautiful?

After discovering historical romance novels, it was only natural that the supernatural and love/romance elements should someday meet in my wonderland of a brain. I’m glad they did for their children have been pouring onto the computer screen ever since. Whoever said it was bad to be a daydreamer with your head in the clouds, futuristic planets and underground, subculture worlds? I don’t know about you, but I would much rather play there than in reality.

I love to travel and try new things, whether it’s a paranormal investigation of an old Vaudeville Theatre or climbing Mayan temples in Belize. I’m addicted to movies and used to drive my mother crazy while quoting random scenes with my brother. Though it has yet to happen, my dream is to be in a horror movie as 1. A zombie or 2. The expendable screaming chick who gets it in the beginning credits. But for the most part I can be found writing in my office with a cup of coffee in pajama pants.

Rebecca Cook lives and works in the Spokane area, primarily in film and theater.  She’s 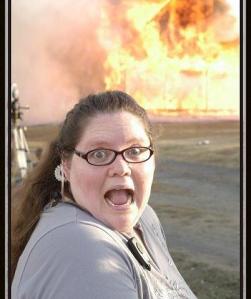 worked as an actress, director, costumer, make-up artist and stage manager with several companies throughout the region.  From an early age, Rebecca knew in her heart she was a storyteller.  There have been many exciting experiences that formed her professional life, including six years working in radio, founding a community theater, teaching in college theatre departments and assistant directing The Miracle Worker directed by Patty Duke.  For the last several years, she has been working as the Wardrobe Supervisor and Set Costumer on over 20 feature films, as well as other commercial productions.  She has recorded commercial and documentary voice-overs, as well as bringing to life over 50 audiobooks, for authors like Christine Feehan, Jennifer Ashley and Lucia St. Clair Robson.  In 2012, she had the pleasure of directing the award-winning short film, The Birthday, and has wrapped her second short film, Root Bound.  Because she can’t get enough of the sound of her own voice, she has been asked to speak to many theater students and local professionals about her journey creating a life in the arts.  She is thrilled to be spending her life doing so many things she loves.

I am a lover of books, both reading and writing. 2018 marks the beginning of my own journey from writer to published author. This blog will showcase various authors' thoughts on the elements of novel crafting, and my attempts to find my voice in writing. While journaling this journey, I hope to encourage others to follow their dreams. Book reviews continue as I have the last four years, only making time for my new pursuits.
View all posts by eileendandashi →
This entry was posted in Audiobook, Audiobook Review, Fantasy, Fantasy Romance, Romance and tagged Erotic Fantasy, Fantasy Romance, Michelle M. Pillow, Rebecca Cook. Bookmark the permalink.