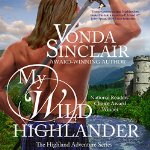 About the Story: This book is a National Readers’ Choice Award Winner!

Lady Angelique Drummagan, a half-Scottish, half-French countess, has suffered much pain and betrayal in her past. She wants nothing to do with the sensual Scottish warrior that the king has ordered her to marry because the rogue could never be a faithful husband, but she has little choice in the matter.

Dangerous, greedy enemies threaten her from all sides and she’s in dire need of his protection. Sir Lachlan MacGrath, known as Seducer of the Highlands, possesses a charming wickedness and canny wit which has earned him much popularity. After the king decrees that he wed the fiery hellion, Lachlan discovers there is one woman who can resist him–Angelique.

Can he break through her icy façade and melt her heart, or will the dark secrets lurking in her past not only cost them their future together, but their very lives?

My Thoughts: I absolutely adored Lady Angelique with her reactions about events around her, her fighting spirit to stand up to what she believes, and her absolute belief her husband-to-be was nothing more than a skirt lifter, lecher and debaucher, dallying with women at court.  She could not abide sharing a bed with him, a barbaric Scot of the Highlands.

Narrator Andrew Bryan’s excels in dialog.  I love the smooth baritone voice of Lachlan.  He did a superb job with Angelique’s voice, depicting her very French side. Her English had a strong French accent, in addition to speaking French in dialog.

Angelique insulted her husband at every turn, in French, not knowing he spoke French and several other languages.  She embarrassed herself many times with her rash and quick temper. (she endears herself) Nevertheless she was a very likeable character.  I could understand why she reacted the way she did, however Lachlan didn’t know her backstory, which created even more tension between the two.

She lived in a world where women were used by men; whether to obtain their property or bodies and ultimately their heirs. Lady Angelique detested Highlanders. All men were faithless pigs.

After a very funny scene, where Lady Angelique escapes from a drooling fool (her words), by entering a darkened room only to find she happened upon two people pleasuring themselves, and then being found by the king’s guards in the same room as Lachlan and his paramour, however, Lady Eleanor had sneaked away, not being caught. From one shock to another she finds Lachan is to be her husband, take her father’s title of Earl of Draughon and claim the chief of clan Drummagan. And with shock she leaves the King’s chamber. How can she escape this fate?

Highlander Lachlan is no less shocked. Frankly, he likes women and beds many. He never expected to rise to this level. His older brother was an Earl, but never him. Angelique was one prickly lass as far as he was concerned. But he couldn’t say nay to the king. He would have to make this work. Could he lead a clan, could he be faithful to his wife? Did he even want to be faithful to that hellion cat?

Conflicts abound between these two in this well-written suspenseful story. Lachlan really tries to be her protector, his job as a husband. He felt he failed over and over. Plenty of danger awaits this passionate and volatile couple as they struggle to understand and trust each other.  Will they be too late? 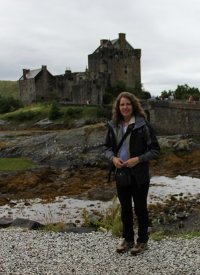 About the Author: Vonda Sinclair’s favorite indulgent pastime is exploring Scotland, from Edinburgh to the untamed and windblown north coast. She also enjoys creating hot, Highland heroes and spirited lasses to drive them mad. Her historical romance novels have won an EPIC Award and a National Readers’ Choice Award. She lives with her amazing and supportive husband in the mountains of North Carolina where she is no doubt creating another Scottish story.

About the Narrator: Andrew Bryan is a versatile actor living in London. He does improvisation, sings, juggles, voiceovers, stage combat and firearms. Bryan is from north Ireland and is skilled in the following different accents which has him in good stead working with authors who write with characters with several different accents. His voiceover skills include several accents: Scottish, Irish, British, Scandinavian, New York (Brooklyn), Russian, Cockney, German, French, South African.

I am a lover of books, both reading and writing. 2018 marks the beginning of my own journey from writer to published author. This blog will showcase various authors' thoughts on the elements of novel crafting, and my attempts to find my voice in writing. While journaling this journey, I hope to encourage others to follow their dreams. Book reviews continue as I have the last four years, only making time for my new pursuits.
View all posts by eileendandashi →
This entry was posted in Audiobook, Audiobook Review, Highland Stories, Historical Fiction, Historical Romance, Romance, Romantic Suspense, Women's Fiction and tagged Andrew Bryan, Highland Adventures Series, My Wild Highlander, Vonda Sinclair. Bookmark the permalink.

1 Response to Audiobook Review: MY WILD HIGHLANDER by Vonda Sinclair