Posted on February 18, 2015 by eileendandashi

Fast-paced with a bone-chilling evil antagonist!  This thriller will sure to please the most discerning reader!  Watch out!  There’s a cliff hanger, but the story is so worth reading the rest of the series!

***This is BOOK ONE of a THREE book series. It is NOT a stand-alone book. The entire series is now available!!***

Within these pages lie kingdoms with castles and princes who fall in love with fair maidens, but make no mistake−this is no fairytale.

His father’s kingdom is on the brink of upheaval and at the center of it all is an ordinary girl who could be the key to its undoing. When faced with the ultimate choice, will he choose the girl he’s falling in love with or the kingdom he has sworn to protect?

An ordinary girl with an extraordinary past… All she wants is to be free. What she doesn’t realize is that freedom comes with a price she can’t afford to pay. She’s forced to accept the proposal of a prince she despises, even though her heart belongs to someone else… his brother.

Seventeen-year-old Rema lives in a brutal kingdom where travel between regions is forbidden, people are starving, and looking at someone the wrong way can mean death. Nineteen-year-old Darmik is the king’s son and Commander of the King’s Army. He spends his days roving the island, doing his father’s bidding and trying to maintain control over the people.

When a chance encounter throws Rema and Darmik together, they share an instantaneous connection, but any sort of relationship between them is strictly forbidden. Darmik’s brother, the Crown Prince, notices Darmik’s interest in Rema and, in a calculated, political move, blackmails her. Faced with an impossible choice, Rema is forced to sacrifice her heart in order to save her family.

As Rema is taken to the palace with the Crown Prince, Darmik confronts the growing rumor that a legitimate blood heir to the throne exists and is trying to overthrow Darmik’s family. In Darmik’s quest to hunt down and kill the threat, he discovers that nothing is as it seems. Locked in the king’s castle, Rema finds herself a key player in a massive power struggle. When Darmik shows up, she’s not sure if she can trust him. The line between friends, enemies, and loyalty becomes blurred. As truths are unlocked, Rema understands that she just might be the key to finding the rightful heir and restoring peace to the kingdom… if she can manage to stay alive long enough.

My Thoughts: As far as stories, this terrific intriguing plotted story kept me listening and needing to know more. Plenty of suspense, action and heart ache. The character that absolutely stands out as most abominable is Lennek, the first-born of the present king of the kingdom. He was a man who lived to hurt others and did so in a most bone-chilling manner. I wonder what his back story is, to make him be so vicious and seemingly without remorse and shame. Narrator Michelle Michaels really did a superb job making me hate him with his syrupy speech and evil intentions in his every word.

Darmik was lovable, but was caught between doing what he had promised to do (to take care of his family) and following his heart. He must have had a strong character to put up with the likes of his brother and king. I felt sorry for him, because he had been put into such a difficult, precarious position. When his heart had found the lovely Rema, he couldn’t follow it, because duty held the stronger rein on him. His weakness however, was believing the worst of Rema, not following his heart.

Rema, ah, Rema. Such a sweetheart. Here she was seventeen years old. Wild and as sweet as any flower. As a reader, we know that she is the only surviving heir to a kingdom exterminated by Darmik’s father. Very gruesome in the telling his portion of events. However, Rema doesn’t know who she is, yet the blood that flows within her body is strong and very much royal as you will see as the story progresses. I love her passion for the less fortunate and her passion for life! Personally, I believe that’s what draws Darmik to her other than her blond beauty, so unique in their society.

The biggest cruelty for me was how the story ended. Please take to heart the warning. This is not a stand-alone. My mouth hung open mouthing no-o-o-o-o! If I don’t get my hands on the second book soon, I shall be most upset! But be that as it may, I’m told that the whole series is available. (Thank you, Jennifer Davis)

Michelle Michaels’ performance excellently brought to life the characters that Jennifer Ann Davis created. Her voice was easy to listen to and engaged me. Her emotional involvement in the telling of the story was quite apparent. She did something in the story that I don’t hear much in other narrations. She sighed , cried, and laughed when called for. Most of the time, it felt genuine, but there were times that it didn’t quiet ring true. That being said, I would certainly want to listen to her again in any audio she produced.  I hope to hear her continuing the series.  Her production carried me along on a breath-taking adventure of peril and fear. 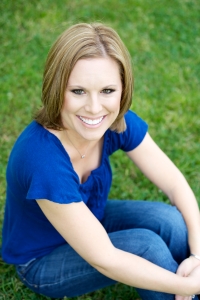 About the Author: I graduated with Department Honors from the University of San Diego with a degree in English. While working to earn my teaching credential, I was a legal assistant for an attorney. That’s about the time I finally married my high school sweetheart. Once I received my credential from USD, I taught high school English until I had my first child.

Currently I am a stay-at-home mom. I have three kids, one large dog, and a gecko.

A couple of years ago, I entered a writing contest about motherhood and won.  My satirical essay, “Caution: Warning Label Not Included!” was published in the anthology Manual for Motherhood, reaching number one in the Parenting section of Amazon!  This sparked my need to write on a daily basis, and I have been writing ever since!

My debut young adult novel The Voice was published by Lands Atlantic in January 2013. The Voice is a finalist in the 2014 Next Generation Indie Book Awards: Young Adult Category (dubbed the Sundance of the book publishing world), and the winner of the 2013 San Diego Book Awards: Best Young Adult Book.

My next adventure, The True Reign Series, is a young adult historical fantasy series consisting of three books (The Key, Red, and War), all now available.

The Power to See, my only adult novel was rereleased through Crimson Tree Publishing, and is now available.

I’ve always had a passion for reading and writing.  Being transported into another world and experiencing things beyond my imagination–what could be better? Besides being an outlet and a love, I hope to write books that encourage all to read.

About the Narrator: Michelle is a native British female voiceover artist. Her voice  is friendly, youthful, upbeat, conversational, natural, warm, helpful, trusting, soothing and sophisticated. She has worked with Toyota, Virgin and the UK Government Home Office. Michelle has her own recording studio and can deliver high quality voiceovers  in a range of formats.

She recently narrated a novel entitled: “Winner Takes All”, completed a radio play production “The King Of Rome” and voiced a US movie trailer.

Her voice is versatile and would suit various projects: from serious corporate presentations and e-learning to breezy, upbeat commercials, narration and character work.

I am a lover of books, both reading and writing. 2018 marks the beginning of my own journey from writer to published author. This blog will showcase various authors' thoughts on the elements of novel crafting, and my attempts to find my voice in writing. While journaling this journey, I hope to encourage others to follow their dreams. Book reviews continue as I have the last four years, only making time for my new pursuits.
View all posts by eileendandashi →
This entry was posted in Audiobook, Audiobook Review, Clean Read, New Adult, Young Adult and tagged Audiobook Review, Clean Read, Jennifer Davic, Medieval Clean Read, Michelle Michaels. Bookmark the permalink.